There is frequently a debate between financial gurus as to what method of debt repayment is best. 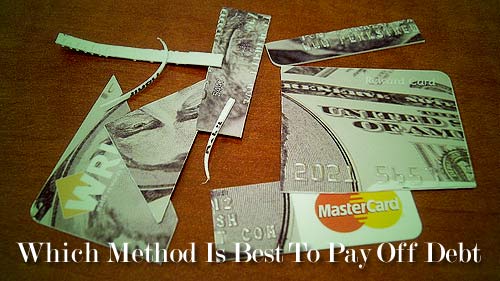 Critics argue that Dave Ramsey’s approach is not cost effective—you pay more in interest by following the debt snowball method.  Dave Ramsey argues that personal finance is not only about math, it is about psychology as well, and the psychological boost of seeing at least one of your debts disappear quickly helps greatly in debt repayment.  There is real motivation from seeing immediate results.

On the other hand, financial gurus argue that the most effective way to pay off debt is by paying the debt with the highest interest rate first, no matter how large or small that debt is.  By paying off the debt with the highest interest rate, you are freeing yourself of a debt that takes more and more of your hard earned money simply for interest, rather than principal.

Recently, the April edition of Kiplinger’s included an essay by Robert Frick, senior editor at Kiplinger’s.  He argues that we should pay off our cards based on the highest interest rate, but we don’t because “our brains aren’t adept at quickly calculating” the financial implications of paying the debt with the lowest balance first.  He explains, “Think of $10,000 in credit card debt with an interest rate at the national average of 14.9%.  You want to pay off that debt aggressively, so you figure you’ll pay 4% of the balance,or $400, on the card each month.  Quick, how long will it take to pay it off?  You may think, Twenty-five monthly payments would be $10,000 then add in some interest.  The debt will disappear in a couple of years.  In fact, you’ll be paying for 31 months and will rack up more than $2,400 in interest.”

Pick a Plan and Stick with It

Both parties make compelling points, but the argument reminds me a lot of weight loss.  One person may advocate a low-carb diet while another may advocate a structured diet plan like Weight Watchers.  Actually, if you stick to your weight loss plan, either plan will give you results because the bottom line is that you are consuming less than you previously did because you are following a plan.

Don’t struggle with which debt repayment plan is better—paying off the lowest debt first or paying off the highest interest rate first.  The important decision here is to decide to pay off debt and make a plan for how you will tackle that debt.

My husband and I are taking a hybrid approach.  We are paying down our debt first by category.  Our priority is to first pay off all credit card debt before moving on to student loan debt, even though my student loan has a lower overall balance than one of our credit cards.  We have been paying down the credit cards based on Dave Ramsey’s suggestion of paying down the lowest cards first.  Doing this gave us an immediate shot of energy when we paid off the credit card with the lowest balance in the first month of becoming gazelle intense.  Yet, following this method, we are saving the largest credit card, which is also the credit card with the highest interest rate, for last.  Are we paying more in interest?  Yes, but I stay motivated by seeing debt disappear.

When paying down debt, determine which strategy works best for you and then stick with the plan.  Don’t concern yourself with how much interest you are paying, unless that motivates you to pay down debt more quickly.  Instead, just focus on how you can pay down the debt, in the order that works for you, as fast as possible.

Share4
Pin30
Tweet21
Share1
56 Shares
Last Edited: 10th February 2014 The content of biblemoneymatters.com is for general information purposes only and does not constitute professional advice. Visitors to biblemoneymatters.com should not act upon the content or information without first seeking appropriate professional advice. In accordance with the latest FTC guidelines, we declare that we have a financial relationship with every company mentioned on this site.

Previous Post: Trying To Buy A New House When Your Current Home Is Underwater
Next Post: How To Rollover Your 401(k) To A Roth IRA