When you’re trying to get ahead financially it can be easy to look at only the large expenses in your budget, and focus your attentions on finding ways to cut those.

Some have said, however, that keeping your focus only on the big things is a big mistake.

In order to get ahead you should focus on the whole financial picture – the big and the small expenditures in your budget. 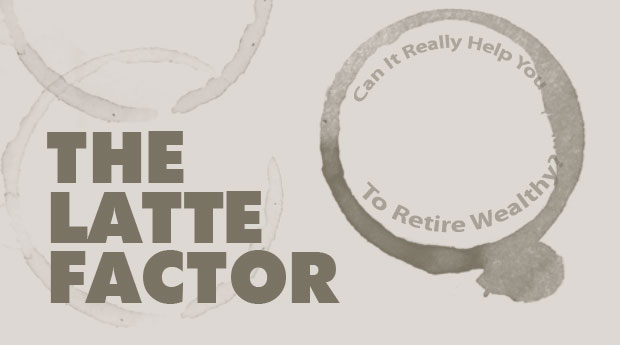 In his book The Automatic Millionaire author David Bach coins the term “The Latte Factor®” to focus on how if you want to “finish rich” in retirement you can simply redirect spending on small discretionary budget items (things like your daily latte, bottled water or cigarettes) towards spending on yourself.

Cut back on discretionary items, and spend that money instead on savings for retirement.

Here’s how he explains it on his site:

The Latte Factor® is based on the simple idea that all you need to do to finish rich is to look at the small things you spend your money on every day and see whether you could redirect that spending to yourself. Putting aside as little as a few dollars a day for your future rather than spending it on little purchases such as lattes, bottled water, fast food, cigarettes, magazines and so on, can really make a difference between accumulating wealth and living paycheck to paycheck. We don’t even realize how much we’re actually spending on these little purchases. If we did think about it and change our habits just a little, we could actually change our destiny.

So if you want to finish rich Bach suggests that you should:

Changing your habits even just a little bit over time can mean big changes in your financial future. Here’s a discussion we had surrounding The Latte Factor® on a recent Money Mastermind Show.

On his site David Bach has a “The Latte Factor® Calculator” that helps to illustrate just how much those small savings amounts can add up to over time.

For example, if I were to redirect a regular daily $5 coffee habit to savings (more like $5.50 in my area for specialty drinks), over time those small dollar amounts would add up. Here’s the breakdown of how $5 daily, weekly and monthly coffees redirected to savings will grow over time at a conservative 6% rate of interest.

If you only nix one $5 weekly coffee for a contribution, even that will lead to $42,652.40 over 40 years. Still a significant amount of money.

While the name “The Latte Factor®” is catchy, I think for many their “factor” that causes them to overspend may not necessarily be a morning coffee. Their money leaks may be in another area.

I know for years our family has had an “eating out factor”. We would each spend $5-10 to eat out just about every day of the week. If instead we had been making our lunches and bringing them to work, I shudder to think how much money we could have saved. The key is to sit down and figure out where your weak areas are. Some of the more common areas for money leaks to arise:

Cons To The Latte Factor®

The Latte Factor® has it’s detractors and critics. There are a few main reasons why:

Saving Your Money In Small Amounts

To me the power of The Latte Factor® is to point out that even small amounts can add up to large amounts if you give it enough time.

Make a sacrifice here and there, and save and invest for the long haul, and in the end you’ll come out much further ahead in the end.

I recently started an experiment on this site in order to see just how much I could save if I used automatic savings and investments in small amounts – without even thinking about it. To do this experiment I signed up for two services, a savings account and an investing account:

Digit.co has an interesting business model where they save money for you on a regular basis without your intervention. It analyzes your checking account balance and regular spending, and when it thinks it won’t overdraw your account, it will save money to your Digit savings account in small amounts – anywhere from a few dollars to $30-40 or more.

Over time those small savings amounts add up to larger amounts – and in the end you probably won’t even notice the money has been taken out.

Once the balance in my Digit savings account reaches $75 or so, I take the money and move it to my Roth IRA at the free investing service Axos Invest.

So far in the two months that I’ve been doing the experiment I’ve saved and invested almost $630 via Digit and Axos Invest.

Over an entire year that works out to $3780, which is over half way towards fully funding the Roth IRA for the year. I never even missed the money since it kind of trickled out of my account – instead of going in one big chunk!

The Power Of Making Small Cuts & Saving For The Future

The power behind the idea of The Latte Factor® is the idea of being intentional about your spending and saving decisions, and realizing that even the small choices you make every day have an effect.

What is the opportunity cost of having that cup of coffee?

If you choose to forgo your coffee a few days a week and instead save that money, how much more will you have saved when it comes time to retire?

Having one bad home loan or unpaid credit card can effectively wipe out any gains you might have made through your savings on the small things.

Stay on top of your whole financial picture!

As for me, I’ll likely still be having that coffee at Starbucks every now and again, I’m not one to completely forgo any of life’s pleasures. Having something less often means you’ll look forward to it more anyway, right?

Have you ever tried implementing the ideas behind The Latte Factor®? Did you find you were able to successfully cut back in some areas in order to save more?

Share74
Pin30
Tweet42
Share12
158 Shares
Last Edited: 22nd October 2019 The content of biblemoneymatters.com is for general information purposes only and does not constitute professional advice. Visitors to biblemoneymatters.com should not act upon the content or information without first seeking appropriate professional advice. In accordance with the latest FTC guidelines, we declare that we have a financial relationship with every company mentioned on this site.

Previous Post: Jesus Was Tempted In Every Way, Including Wealth And Power
Next Post: What Does It Take To Be An Entrepreneur?