When it comes to achieving financial stability, most will agree it can’t be obtained without investing. We invest in our future through various retirement accounts, and many choose to invest in their children’s future through college savings such as 529 plans. There are varying opinions on if and when parents should pay for college for their children, and if so…how much. But what about the pre-college years…before our children are able to work and financially contribute? Should parents pay for private school?

Before you read any further, let me warn you that I don’t plan to provide a “one size fits all” answer because there isn’t one. Instead, I’m going to present facts, scenarios, alternatives, and priorities to you can use to make sure your child gets the best education possible. 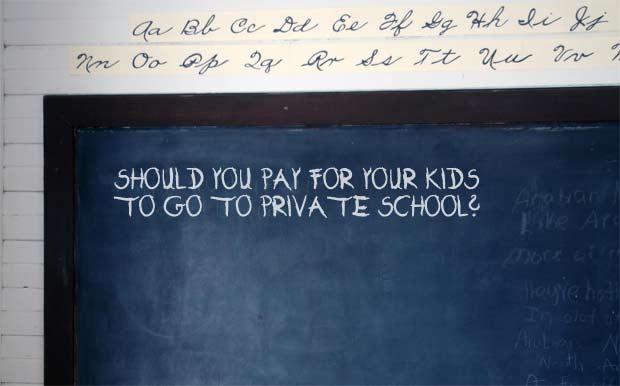 *The cost of non-sectarian secondary private school tuition is more than the average cost of tuition at a 4-year college. That amount is $22,261 (source)

Most choose to pay for private school because they generally perform better than their public school counterparts. Some parents feel it is a safer alternative, and others feel they are able to form a stronger bond with teachers. Most that choose to attend private schools are religiously affiliated. This could be because these schools align with their own personal belief system. However, after reviewing the tuition costs, I’m sure finances are a major factor when considering the type of private school.

Is Private School For You?

Ask yourself these questions to determine if private schooling is the right decision for your family.

Why are you considering private school?
Putting little Susie is private school to keep up with the Jones’ just isn’t a good reason in this financial climate. But if your concern is based on values, education, safety or other factors, you owe it to yourself to investigate further.

If you are fortunate enough to live in a neighborhood with a thriving school district, take advantage of it! Alternatively, if your district is at the other end of the spectrum, private school may be a viable alternative. Last year a Midwest school district lost their accreditation and became the first school system under direct state oversight. Families had the difficult decision to keep their children in an unaccredited school or let them be displaced and bussed to a neighboring district. Unfortunately, the students are not excelling because they are being tossed around due to circumstances that are not their fault.

Will my child excel?
If you have an older child, you already have an idea of what type of learner they are and what type of environment will help them excel academically. Would you rather your child be an A student in a public school or a C student in a private school? The rigorous academic standards placed by some institutions aren’t meant for every child. Alternatively, many public schools offer advanced placement and/or enrichment classes for those students who are looking for more of a challenge.

Can I Afford It?

Probably the biggest consideration when considering private school is rather or not you can afford it.

Just like college, I don’t believe parents should pay for their children’s education until their future years are secured. If you cannot afford to invest in an employer retirement plan (401K or TSP), or some sort of Individual Retirement Account (IRA), then you cannot afford private school tuition. Ideally, you would max your retirement savings first, but even if you can’t contribute the allowed maximum, contribute something to retirement before considering private school tuition.

Some private schools offer financial aid. Before I was accepted to my high school, I applied for private school (for the wrong reason — my best friend was going there). The tuition was the same as what I would eventually pay for college. I was eligible for need-based financial aid, but there was still a generous portion we would have been responsible for.

Evaluate the security of your job. Last year, the government shutdown and those that had what are considered some of the most stable jobs in the country (government employees) were indefinitely furloughed. For the non-Department of Defense employees, that lasted 17 days. Eventually, they were all granted back-pay, but that was a time of great uncertainty. It would be a shame to start private school and not be able to finish it. Which brings me to my last point…

– A healthy emergency fund can help offset job uncertainty. An e-fund should not be used as a standard means to pay tuition, but if an unexpected job loss occurs, a 3-6 month funded emergency fund would be there to help until things return to normal.

If you’ve determined that you cannot afford private school, you do have some alternatives:

Personally, I am considering private Christian education for my son. We have a school at my church that promotes early reading and math skills. I’ve seen firsthand the academic achievements of these students, as well as monitored their transition to high school. I am fortunate, because the schools I am considering fall well below the statistical average for Religious private school tuition.

Also, since my 3-year plan involves buying a bigger house, we plan to move closer to the private academy we have our eyes on and move to one of the top rated school districts in the area. This will give our future home great resale value and, should we decide private school is not for us, there will be top rated public schools we can transition to.

I Would love to hear from you ~

What is your opinion or private & public schools?
Have you or would you pay for your child to go to private school?
Have you ever moved, or would you consider moving, to be in a better public school district?
Was schools a major factor when renting/buying a home or apartment?

MomCents is a 30-something Christian, wife, and mother of a 2-year old son who is jumping back into the wonderful world of blogging with her attempt to create a PF/Mom Blog. If you’re looking for expert advice, she advises you to stay away! But, if you want to follow the up, downs, twists, and turns of a real person who will make mistakes along the way…stop on by. Hopefully you’ll find a laugh, encouragement, or both! Find MomCents on Twitter & Facebook

Share36
Pin98
Tweet34
Share1
169 Shares
Last Edited: 2nd July 2014 The content of biblemoneymatters.com is for general information purposes only and does not constitute professional advice. Visitors to biblemoneymatters.com should not act upon the content or information without first seeking appropriate professional advice. In accordance with the latest FTC guidelines, we declare that we have a financial relationship with every company mentioned on this site.