I don’t see myself as a consumer.  My husband and I stick to a strict budget that doesn’t allow much “blow” money out of necessity.

However, we’re packing up to move halfway across the country, and I’m amazed at how much “stuff” I’m sorting through that I simply don’t want to move 1,750 miles across country.  Over the last few weeks of packing, I’ve donated 12 bags of “stuff” to Goodwill (mostly books and clothes and toys).  I’ve also sold over $700 worth of stuff–canning jars, baby gates, outgrown kids clothes, etc.

Even though I don’t see myself as a consumer, the “stuff” that we had available to donate and sell tells a different story. 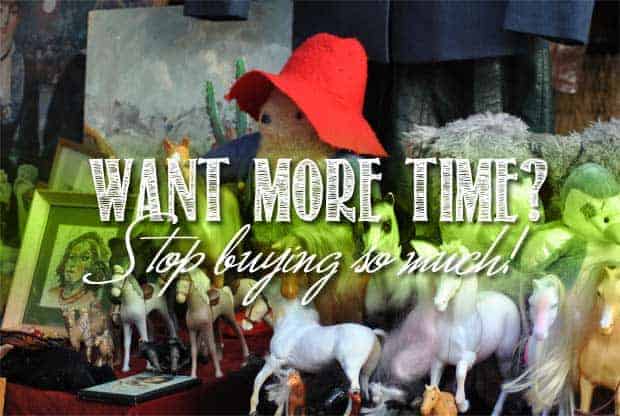 What I’ve been most amazed by are the items we bought and never used or only used once or twice.  For instance, we bought a juicer at Costco, but we didn’t care for the flavor or the fact that all the fiber in the fruits and veggies was discarded.  We decided to keep it just in case.  Now, I’m trying to sell it for a 1/4 the price of what it cost us.

I also bought an ergonomic keyboard several years ago when I thought my old one was on the fritz.  I never did use it because they old keyboard never died.  Instead, I switched to using laptops and now don’t even need the keyboard.

I cringe to think how much more “stuff” we may have had around our house if I had more disposable income.

What I’m struck by is that I’m essentially trading free time for “stuff.”  I work as a freelancer and have control over how much work I do each month.  If I need money, I can work more.  If the month isn’t as tight, I can work less.

If we lived a simpler life with less possessions, I’d be able to work less.  Yet, time and time again, we’re pinched for cash.  I never equated that with being a consumer, but my clutter shows otherwise.

Yet, I’m not alone.  Many of us, dare I say most of us, are working harder just to buy more “stuff.”

According to The New Yorker, back in 1928, John Maynard Keynes argued that in the year 2028, people would only need to work about three hours a day to make enough money for their needs.  What he didn’t take into account is that our “needs” would grow. . .and grow. . .and grow.

Italian economists, Lorenzo Pecchi and Gusavo Piga speculated in 2008, “Keynes assumed that people work in order to earn enough to buy what they need.  And so, he reasoned, as incomes rose, those needs could be fulfilled in ever fewer hours.  Workers would knock off earlier and earlier, until eventually they’d be going home by lunchtime.

“But that isn’t what people are like.  Instead of quitting early, they find new things to need.  Many of the new things they’ve found weren’t even around when Keynes was writing–laptops, microwaves, Xboxes, smartphones, smart watches, smart refrigerators, Prada totes, True Religion jeans, battery-powered meat thermometers, those gizmos you stick in the freezer and then into your beer to keep it cold as you drink it” (The New Yorker).

Meanwhile, Joseph Stiglitz argues that Keynes got it wrong for a different reason.  “We ‘learn how to consume by consuming,’ and how to ‘enjoy leisure by enjoying leisure'” (The New Yorker).  That’s why, according to Stiiglitz, “Europeans will further reduce their working hours and become even more skilled at taking time off, while Americans, having become such masterful consumers, will continue to work long hours and to buy more stuff.  TVs ‘can be put in every room and in both the front and the back of automobiles'” (The New Yorker).

Whichever theory you find more plausible, the simple fact is that we’re sacrificing our free time for stuff.  I, for one, now that I’m aware of how frequently I’m doing this, plan to make a conscious effort to get off the consuming treadmill.

What about you?  Do you look around your house and see things that you bought that you didn’t really need or use?

Share51
Pin12
Tweet37
Share2
102 Shares
Last Edited: 1st July 2014 The content of biblemoneymatters.com is for general information purposes only and does not constitute professional advice. Visitors to biblemoneymatters.com should not act upon the content or information without first seeking appropriate professional advice. In accordance with the latest FTC guidelines, we declare that we have a financial relationship with every company mentioned on this site.

Previous Post: Should Parents Help Their Kids Pay For College?
Next Post: Should You Pay For Your Kids To Go To Private School?