Last summer we had a streak of hot days in the mid 90s.  It was hot, hot, hot.  Right in the middle of the steamy weather our AC unit decided to start going on the fritz.  The temps in our house never seemed to get below 80-85 degrees. Something wasn’t quite right. Having no real idea what to do in order to fix the problem, and forgoing my own advice to try and do it yourself and look things up on Google first, we called the heating and plumbing company that had installed the unit to come out and take a look.

The technician who came out inspected the unit inside and out quickly realized that our outside condenser coils on our AC unit were extremely dirty, which caused the unit to not be as efficient in cooling the home.  The tech hooked up our hose, and after unhooking the power to the unit, he hosed it off. Our unit miraculously started working again within minutes.

In order to save money on a house call the next time the repairman suggested trying what he had done first, as in many cases that’s all it takes to get things running again.  One other occasion the unit started to have problems cooling the house, and after hosing off the unit, it started working again. Money saved! 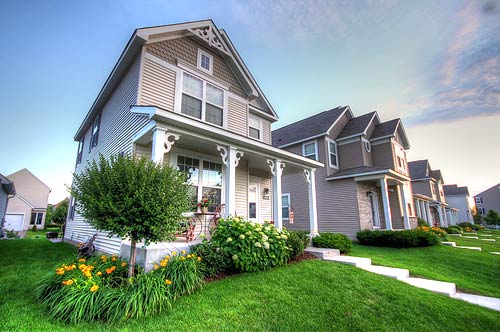 The AC Goes Out Again

This summer we had some of our first really hot days again this past weekend.   On Thursday we started noticing that the house wasn’t getting below 78-80 degrees, and we knew something was wrong again.   Friday morning I went down to our basement and noticed that there was a big puddle of water underneath our AC unit. That couldn’t be a good sign. I cleaned some of it up, turned on the dehumidifier and went to work. 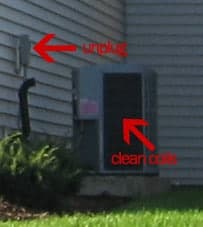 When I got home the house was even hotter, and I decided to try the old “hosing off the AC unit” trick, to see if that would get things running again.   After two tries and no luck, we knew that wasn’t our issue this time.  We also mentioned to each other how our utility bills had been a bit high the past couple of months, almost as if our unit was working harder than normal.  There might be something else wrong.  I wasn’t going to be able to DIY this one.

Finally Friday night we called and made an appointment for the next day to have the AC repair guy come out.  We explained how we had tried hosing off the unit, and how that hadn’t worked. We then told them how there was a puddle underneath the unit that morning.  The tech on the phone knew almost instantly what the problem probably was. He surmised that that we were low on refrigerant/coolant in our unit.  When that happens the coils in the unit tend to get colder and freeze over. This causes ice to buildup on the unit and when it turns off overnight, it thaws the ice which goes everywhere and puddles underneath the unit like we had seen.  He asked us to turn off our unit overnight and leave it off in preparation for their visit the next morning.

Fixing The AC. Pricier Than We Had Hoped

On Saturday morning the repairman showed up and went right to work. He confirmed our outside coils were clean and weren’t the problem. Then he inspected our unit inside and confirmed that we were low on coolant in our unit.  As mentioned being low on coolant was causing our unit to ice up, and then it had problems keeping the house cool because it was  having to work harder than normal. It also explained our higher than normal utility bills.

Since our house was relatively new and we hadn’t had issues before that, he surmised that we had a small leak somewhere in our unit’s coils.  He gave us a couple of options to fix the problem. Either pay $370 to refill the coolant only, and hope the leak held or wasn’t bad.  Or we could pay $670 to have a sealant and dye mixture injected along with the coolant. That would hopefully stop the leak, or identify the source of a larger leak if they had to come back.  There was also a 2 year warranty with that and they would come back out no charge if they had to. We chose the former more expensive option in order to avoid any more problems going forward.

While it stinks to have problems like this, and stinks even more to have to pay for them, it’s nice to have a backup plan for when these scenarios do occur. After all, most of us are going to have a major negative event in any given 10 year period:

Money magazine says that 78% of us will have a major negative event happen in any given 10-year period of time.

We have saved up a 12 month emergency fund and stashed it away in our Ally Bank savings account.  So when we have problems like this AC unit springing a coolant leak, we don’t have to worry about being able to pay for it. We just transfer the money over and write the check.

So what do we do to prepare for these situations?

Share5
Pin5
Tweet35
Share7
52 Shares
Last Edited: 19th June 2012 The content of biblemoneymatters.com is for general information purposes only and does not constitute professional advice. Visitors to biblemoneymatters.com should not act upon the content or information without first seeking appropriate professional advice. In accordance with the latest FTC guidelines, we declare that we have a financial relationship with every company mentioned on this site.

Previous Post: Estimated Tax Payments: How They Work, When They’re Due And Why You Should Pay Them
Next Post: Why Are Auctioneers Ten Times More Likely To Be A Millionaire Than The Average Joe?