This past year I paid just enough in estimated taxes in order to satisfy the IRS safe harbor requirements, but come tax time I had underestimated how much I would owe in total in taxes, and ended up with a huge tax bill (in excess of $5000). 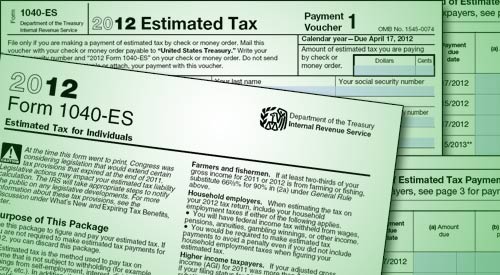 If you’re smart you’ll avoid doing what I did and make sure to accurately track how much income you’re making throughout the year and pay enough in federal, state and self employment taxes in order to not have to pay more than expected come tax time.

Today I want to take a look at estimated taxes, and talk about how they work, when they’re due and why you should be paying them.

Estimated Tax Payments: Who Should Pay Them?

People who work for an employer and receive a paycheck would normally have their taxes withheld from their paycheck, and their employer pays their taxes for them.  If, however, the amount that is being withheld isn’t enough because you have income from investments, from side or part time jobs, or if you have income that isn’t subject to withholding, you might need to think about making estimated tax payments.

If you don’t want to have to pay penalties when tax time rolls around you’ll need to make sure that you’re estimating your income for the year and meeting one of the IRS safe harbor requirements to avoid penalties.   To avoid penalties, do one of the 3 following things:

Last year we did #2 from the above list and withheld 100% of our previous year’s tax liability in order to avoid penalties.   Although we avoided penalties, we did have a big tax bill come April because our income was substantially higher than the previous year.

Paying estimated taxes can be a bit confusing the first couple of times that you do it, but it gets easier.  The first payment is due on April 15th (or whatever day the personal income tax filing deadline is).  To figure out and pay your estimated taxes you can follow this process:

Due Dates For Estimated Tax Payments

Estimated tax payments need to be made 4 times a year in April, June, September and January.  One thing that often confuses people is that the payments are spaced unevenly, not every three months like some people assume.   They are spaced out 2 months, 3 months and 4 months apart.

State Estimated Tax Payments And Self Employment Tax Due Also

Not only are federal taxes due on the dates mentioned above, but you’ll also need to pay your state estimated taxes as well as self employment taxes. While the self employment taxes for social security and Medicare are usually 15.3%, for 2011 and 2012 they have been cut by 2%, and are 13.3%.

Need more detailed information about your estimated taxes? Check out the IRS resources listed below.

Are you making estimated tax payments this year, or have you in past years? Do you find them confusing?

Share11
Pin2
Tweet24
Share5
42 Shares
Last Edited: 5th April 2013 The content of biblemoneymatters.com is for general information purposes only and does not constitute professional advice. Visitors to biblemoneymatters.com should not act upon the content or information without first seeking appropriate professional advice. In accordance with the latest FTC guidelines, we declare that we have a financial relationship with every company mentioned on this site.

Previous Post: Buy Quality To Save Money In The Long Run
Next Post: Why An Emergency Fund Is Important: A Frozen AC Unit, Puddles And A Big Repair Bill