Lending Club has been having another banner year, reaching a variety of milestones and being honored with several different awards, including the World Economic Forum 2012 Technology Pioneer.  Among the recent milestones that they have achieved include last week when they reached $400 million in total loan originations, less than 4 months after they reached $300 million!

We’re proud to announce that this week Lending Club passed $400 million in total loan originations, less than four months after reaching $300 million. It’s hard to visualize such a large number, and we’ve had some fun kicking around ways to understand just how much money $400 million is—for example, it could buy 100 million gallons of gas (enough to drive from San Francisco to New York 1 million times!), 200 million Slurpees, or maybe 250 Lamborghini Reventons.

But in all seriousness, reaching $400 million is a big milestone for us, and an exciting way to move into the final months of what has been a tremendous year for Lending Club.

While Lending Club has been having a good  year, the returns I’m seeing mean I’m continuing to have a good year as well.  The returns are much better than anywhere else my money is currently.  I’m seeing in excess of 11% returns when my stock market holdings are down, and savings accounts are yielding right around 1% in interest.  I think Lending Club and social lending in general are a great way to diversify your savings and investments especially in such turbulent times.

My Lending Club investments have continued to improve, and they’ve now surpassed the 11% mark for the first time. 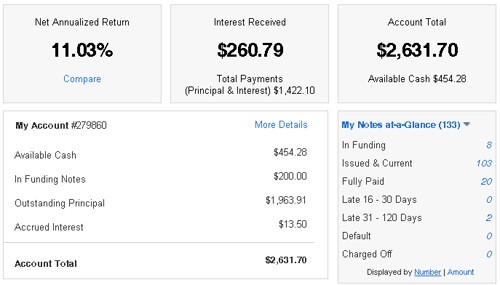 So it looks like my strategy I laid out a while back of adding more risky C, D, E and F grade loans is paying off so far.  My returns have gone up past 11% now!

How Do You Measure ROI?

One thing that is often talked about in the peer-to-peer lending world is how you can determine a more accurate way of knowing your true return on investment (ROI).  Some have complained that the numbers on the Lending Club and Prosper sites will give an overly rosy view of what your actual or projected ROI will be, and the ways that they calculate your ROI are not standardized.  They don’t take into account  future default rates of your loans, how young or old your portfolio is, and other things that may be a factor.  It’s basically a take or leave it when it comes to accepting their stated ROI on your portfolio.

This past month I read a great post over at SocialLending.net that talks about 5 ways to measure your ROI, and he expands on some alternative ways and tools that are out there for people to measure their own ROI.  I normally just rely on what the Lending Club site tells me it is, although I know in reality it may be a bit lower.  In checking my net annualized return this month on Lending Club, it sits at 11.03%.

One of the sites mentioned by Social Lending is Nickel Steamroller’s Lending Club portfolio analyzer.  Basically the analysis tool with give you an estimated ROI after you download all your notes from your Lending Club account and upload the .csv file.   It will go through you notes and give sell recommendations, show duplicate notes and highlight  notes that are below Lending Club’s average return (so you can sell them on the secondary platform).   In looking at my returns on the analyzer, my actual return according to the site will be closer to 9.79%. 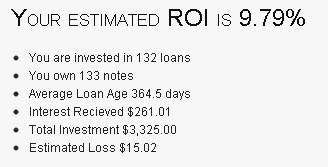 I think my return is showing lower in part because I’ve currently got two loans 31-120 days late and a number of my loans are still relatively young.  So we’ll see if this lower ROI bears itself out over time.  I hope it’s higher though!  I’ve gone a couple of years now with no defaults, I’m hoping I can continue that trend – but I wouldn’t count on it!

Share1
Pin
Tweet9
Share
10 Shares
Last Edited: 7th November 2011 The content of biblemoneymatters.com is for general information purposes only and does not constitute professional advice. Visitors to biblemoneymatters.com should not act upon the content or information without first seeking appropriate professional advice. In accordance with the latest FTC guidelines, we declare that we have a financial relationship with every company mentioned on this site.

Previous Post: How And When To Save For College For Your Children
Next Post: Unemployed? Consider Moving To Where The Jobs Are… North Dakota