Lending Club has been around for a few years now, and as time goes on, more and more people are coming around to peer to peer lending, and agreeing that it may be a legitimate part of a diversified portfolio.

The technology behind Lending Club has continuously shown improvement during the time I’ve been using the site, and I think they’ve got an innovative idea, and a great platform that will only continue to improve.

Apparently some people in high places agree because it was recently announced that Lending Club was honored as a World Economic Forum 2012 Technology Pioneer!

Lending Club was honored in part because of their innovation in the lending and banking industries, which they are helping to change.

All I know is that in the time that I’ve been using Lending Club I’ve shown great results with almost 11% returns in a time when the stock market has been down, and high yield savings accounts are showing tiny interest rates. In short, I think it’s a great way to diversify your investments into something that won’t show as much volatility during rough economic times. 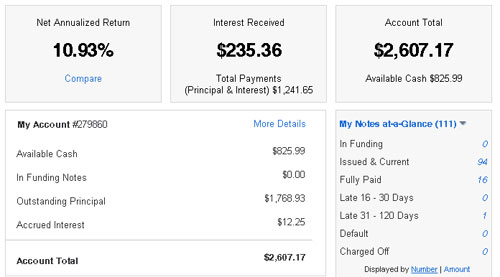 I mentioned a while back that I was changing my Lending Club investing strategy and starting to invest in more higher risk lower grade loans. The rationale was that you can still find people that are relatively good risks, but who have bad credit. Most of these are going to be loans from people who have high incomes and steady employement, but for one reason or another have had a hiccup in their credit causing them to be lower grade.

I’ve invested in a bunch of these Grade C-E loans over the past year, and since doing so my returns have steadily climbed. I would have expected to see a few defaults in there, but so far I’ve been investing in the riskier loans for about a year now, and none of them have defaulted yet. Would you think some of them will still default despite my early success? Possibly. But I’m hoping my gamble on those with steady jobs and high incomes will mean I wont’ see many defaults.

Here’s where my NAR stands now, getting better every month. Now standing at 10.93%. I’m hoping I can break through that 11% threshold soon! 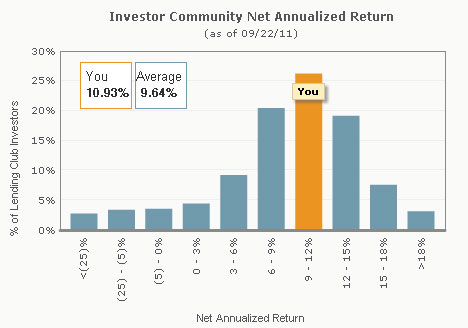 Share
Pin
Tweet23
Share3
26 Shares
Last Edited: 8th November 2012 The content of biblemoneymatters.com is for general information purposes only and does not constitute professional advice. Visitors to biblemoneymatters.com should not act upon the content or information without first seeking appropriate professional advice. In accordance with the latest FTC guidelines, we declare that we have a financial relationship with every company mentioned on this site.