At the first annual Financial Blogger Conference I agreed to participate in what was being called the “Ask The Experts” session.

There were several tables set up in one of the main conference halls where conference attendees could come to ask questions of bloggers about their areas of expertise.  I agreed to be at the “Twitter Expert” table to answer any questions that people might have.

While I’m not sure I’d consider myself an expert in Twitter, I do use Twitter as a part of my overall blog strategy, and I have over 18,600 followers currently. So I guess I do know more than some.

Before the conference started I thought I would put together a post with  some tips and tricks to using Twitter, some tips on setting up your Twitter page, as well as giving links to some helpful tools that people can use to make the most out of Twitter. So let’s get started.

When you’re first setting up your new blog and domain, I’d highly recommend also grabbing usernames for all the popular social media that go along with your blog name. For me that meant grabbing social media accounts for Twitter, Facebook, and other lesser social media with the username of “MoneyMatters” or “BibleMoneyMatters”. Some people also think you should grab the username that goes along with your real name if it is still available. Mine was already taken on Twitter, but I’ve grabbed it on other sites like Google Plus (where you are required currently to use your real name).

On Twitter I originally tried to grab the name BibleMoneyMatters, but it turns out there is a 15 character limit on Twitter usernames. If you’ve got a longer site name like I do, you may need to shorten it, or use something creative. I ended up taking the name “MoneyMatters” instead. I’m glad I did as I tend to think shorter names are usually better since they’re easier to remember. If you choose a name that you end up not liking, don’t panic! You can change your username at any time.

Note: I once had someone offer to pay me several thousand dollars for my Twitter username. Be careful, however, it’s against the Twitter terms of service to sell your username. “Attempts to sell, buy, or solicit other forms of payment in exchange for usernames are [ToS] violations and may result in permanent account suspension”.

When you setup your account you can choose who can see you tweets. You can choose to protect your tweets and only allow approved users to view them, or to allow anyone to see your tweets, even if they don’t have your permission. I want as many people as possible to see the tweets, so I leave mine unprotected. I suggest you do as well. 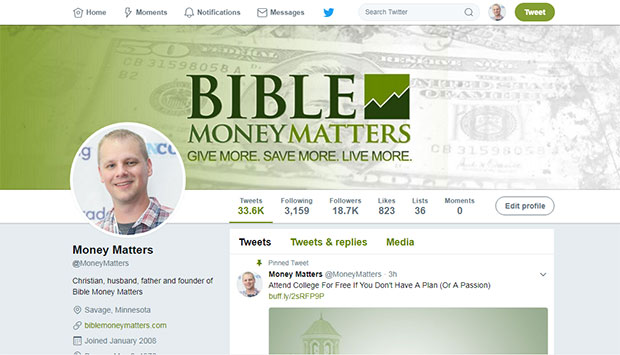 Once you’ve done the basic setup on your account you’ll want to setup your profile by adding your name, url of your site and a bio.

Once you’ve setup the profile another thing I’d recommend doing is customizing your Twitter account with an avatar image and custom background. I put together a tutorial on how to customize your twitter presence previously which will walk you through how to do that, but basically your custom background is a great place to connect with your readers, give urls for other social media profiles, and maybe even give a sentence or two about you or your site. Think of it as a mini business card.

So once you’ve signed up for Twitter and customized your account, what’s next? It’s time to start following other users that have interests in common with you.

One question I always get is how I got so many followers: I’ve found that there really isn’t a secret formula, except to tweet consistently, add value, tweet interesting things, and engage with other users on a regular basis. Try to add more to the Twitter stream than what you had for lunch and that you’re going to the dentist.

And of course, one thing that will almost always get someone to follow you is to follow them first.

I’ve followed thousands of interesting people over the years, and most of them have followed me back. Over time I have un-followed some that I end up not having much in common with, or accounts that go inactive. In general, however, I follow a pretty large number of people as well. I currently follow over 1700 other users.    Here are some places to find like users:

There are certain times of day and days of the week that work best for sending out your tweets. You should think about scheduling Tweets with TweetDeck or BufferApp to go out during those times. Some Twitter stats from one study:

There are a lot of reasons to use Twitter as a part of your blog strategy. Here are a few that I use:

There are a lot of tools that you can use to get the most out of Twitter. I won’t list them all, but here are the ones that I’ve found most helpful. 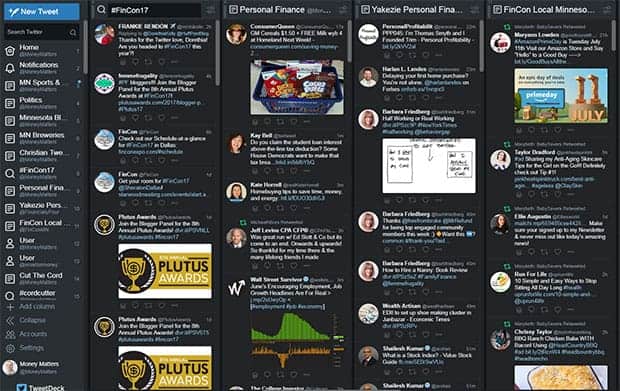 There are literally hundreds of Twitter apps, programs, suites and analytics software out there, but the ones above are a few that I’ve used and liked. Just try doing a google search and you’ll find more Twitter tools than you could ever use.

Twitter can be a great tool for bloggers to add to their tool belt.  While it isn’t going to be your biggest source of traffic, it can bring in a regular stream of users.  It’s also a great way to engage with your readers, network with other bloggers, and engage with influential people you might otherwise not had access to.  It can be an extension of your blog, but stands fine on it’s own as well.  It can help you to increase your site’s income, but needs to be carefully managed.

In short, Twitter is a great tool that all bloggers should be using to help take their blogs to the next level.  If you find the right tools and follow and engage with the right people, it can take what some people see as a waste of time and turn it into something that gives you a great return on your investment.

Share5
Pin3
Tweet
Share3
11 Shares
Last Edited: 26th September 2018 The content of biblemoneymatters.com is for general information purposes only and does not constitute professional advice. Visitors to biblemoneymatters.com should not act upon the content or information without first seeking appropriate professional advice. In accordance with the latest FTC guidelines, we declare that we have a financial relationship with every company mentioned on this site.

Previous Post: You Vs. Debt Video Course And Accountability Program Can Help You To Get Out Of Debt
Next Post: Lending Club Honored As 2012 Technology Pioneer: My Returns Increase To 10.93%, No Defaults