Lending Club has been around for a few years now, and while they and other P2P lending sites got off to a rocky start, I think they’ve started to hit their stride.   Lending Club recently announced on their 4th anniversary  that they have now originated over $300 million in total loans and paid out over 22 million in interest to investors.    So they’re no longer the little engine that could, they’re now becoming the next big thing!  Still, there are still those who don’t believe in P2P lending, mostly because they don’t completely understand it.

When I started lending with Lending Club I wasn’t sure what kind of returns I would see, and as such I was pretty cautious with who I lent money to.  I was only investing with Grade A and B borrowers to begin with. Since then others have convinced me that investing with some lower grade borrowers is a sound idea, and I’ve seen my returns grow from somewhere in the high 8% range (not too bad) to the point where I’m now pushing 11%.

All I know is 11% net annualized returns are a lot higher than I’d be getting in a high yield savings account.   The longer I’ve been using Lending Club, the more comfortable I am with the idea, and the more money I’ll consider putting in.

To start off at the beginning, check out my original review of lending club below:

So how are my Lending Club investments currently doing?  Here’s a snapshot of my account from earlier today showing that my returns are pushing 11% now. 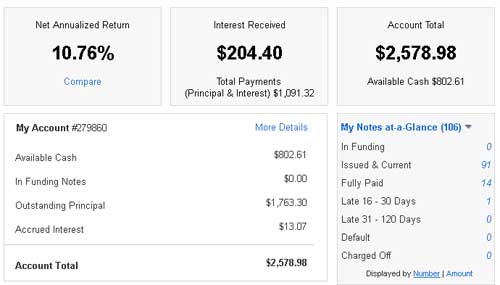 I mentioned a while back that I was changing my Lending Club investing strategy and starting to invest in more higher risk lower grade loans.  The rationale was that you can still find people that are relatively good risks, but who have bad credit.  Most of these are going to be loans from people who have high incomes and steady employement, but for one reason or another have had a hiccup in their credit causing them to be lower grade.

I’ve invested in a bunch of these Grade C-E loans over the past year, and since doing so my returns have steadily climbed.  I would have expected to see a few defaults in there, but so far I’ve been investing in the riskier loans for about a year now, and none of them have defaulted yet.  Would you think some of them will still default despite my early success? Possibly. But I’m hoping my gamble on those with steady jobs and high incomes will mean I wont’ see many defaults.

Here’s where my NAR stands now, getting better every month.  Now standing at 10.76%.  I’m hoping I can break through that 11% threshold next month! 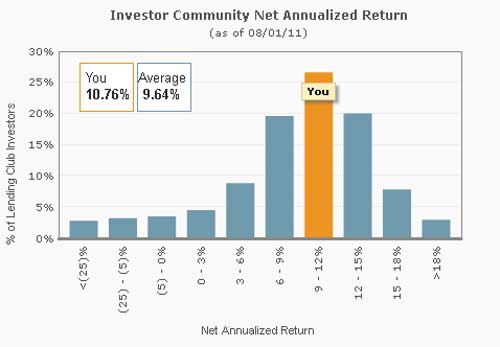 Share1
Pin
Tweet22
Share2
25 Shares
Last Edited: 26th September 2011 The content of biblemoneymatters.com is for general information purposes only and does not constitute professional advice. Visitors to biblemoneymatters.com should not act upon the content or information without first seeking appropriate professional advice. In accordance with the latest FTC guidelines, we declare that we have a financial relationship with every company mentioned on this site.