These past few months my family has incurred over $6000 in medical expenses for a variety of health scares and 1 short hospital stay. The medical bills weren’t our only expenses, however. We also had to pay a few thousand in estimated taxes around the same time, as well as some various other miscellaneous unexpected charges.  In other words, it’s been an expensive few months.

During this time we ended up putting about $3000 in medical bills on our credit card, not only to get the cash back on the expenses, but also because we were waiting to fund and be reimbursed by our Health Savings Account.  We were planning on paying the card off right way, however, due to a miscommunication with my wife I didn’t realize when the due date was.

I realized the mistake when we got a notice in the mail that our payment was late, and that we were being charged a $25 late fee.  (*Shudder. Say it ain’t so!!) 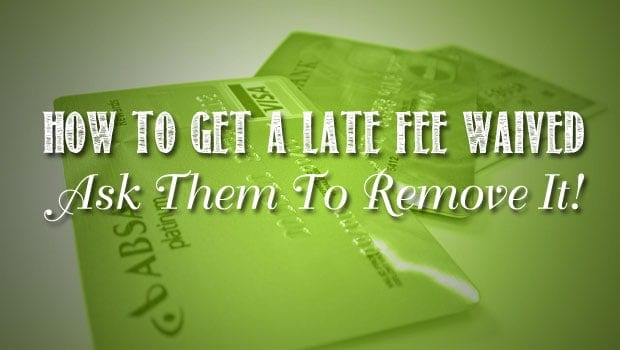 We All Make Mistakes

I know I’m a personal finance blogger, and that means I’m supposed to be pretty good with money, but this isn’t the first time that we’ve made a mistake like this. I’ve had overdraft charges on my bank account before, and at least one time where my mortgage payment didn’t arrive for some reason. Accidents happen, and people get careless. But just because you’ve made a mistake doesn’t mean you necessarily have to pay for it!

One study from Credit.com found that  44% of 1,000 respondents said they’d been successful in getting a financial institution to forgive a fee. What kinds of fees do people have luck in getting reversed? From Time.com:

People seem to have luck with both penalty fees as well as service fees. The survey found that some common penalty fees are the most frequently waived, with 35% of respondents getting an overdraft fee waived and 24% getting a late payment fee waived. Another 10% got an annual fee waived and 6% got a low balance fee waived. Overdraft fees can run $35 a pop or more at big banks, and annual fees of $60 or more aren’t uncommon, so it pays to speak up — even if it’s your fault you got hit with the fee in the first place. Credit.com’s survey found that 8% of respondents succeeded in getting a fee of $100 or more waived.

You’re not the only one being assessed fees on your financial accounts. Don’t be one of the ones actually paying them!


Asking For A Fee Reversal Or Discount

44% of 1,000 survey respondents said they’d been successful in getting a financial institution to forgive a fee.

There have been plenty of times where I’ve asked for a fee to be reversed, a bill to be lowered, or a price increase to be offset in some way.

The point is that we often have fees assessed, or see an increase in prices, and we think we just have to accept it. The reality is, if you just make a few phone calls, often those fees and price increases can be wiped away, reduced or mitigated.

Steps In Asking For A Fee To Be Reversed

So what’s the best way to go about having a late fee on your credit card removed?

Be friendly, ask for the fee to be removed, and if they refuse, try again.

If you think the bank or financial institution has levied fees illegally, you can always file a complaint with the Consumer Financial Protection Bureau.  They have an online complaints desk where people can lodge a complaint about a credit card, mortgage, money transfer, bank account or other financial related matters.

What Happened To My Credit Card Late Fee?

I emailed my credit card company (a phone call may have been quicker) as soon as I realized the error and had scheduled an electronic payment.

I explained the situation in a friendly way to the phone rep, and told them why the payment hadn’t arrived on time (a miscommunication).  I appealed to the fact that we had never before missed a payment, and the fact that we were loyal customers. We didn’t want to go elsewhere with our business. At all times I was respectful and courteous to the rep.

The customer rep obviously has these types of calls every day, and was quickly able to look up our account. As a “one time courtesy” they waived all fees associated with our payment being late.  Our account was credited within 3 days.

Just Make The Call And Get Those Fees Reversed

We were able to call our credit card company, and after a quick 5 minute phone call, we were able to save ourselves a $25 late fee. While $25 may not seem like much, it takes almost $2500 in spending to earn that much in cash rewards on a 1% cash back card. A bit more painful when you think of it like that. There’s no sense in paying the fees if you don’t have to.

By just taking a few minutes of your time, and asking them to remove the fee (even when you are in the wrong), you can save tens or hundreds of dollars. Just ask. You’ve got nothing to lose except a fee!

Have you ever had a late fee or service charge removed?  How did you get your bank to remove the charge?

Share20
Pin198
Tweet20
Share5
243 Shares
Last Edited: 8th July 2014 The content of biblemoneymatters.com is for general information purposes only and does not constitute professional advice. Visitors to biblemoneymatters.com should not act upon the content or information without first seeking appropriate professional advice. In accordance with the latest FTC guidelines, we declare that we have a financial relationship with every company mentioned on this site.

Previous Post: Does It Ever Make Sense To Lease A Car?
Next Post: Parents Starting To Put Own Finances Ahead of Kids’ College Costs