I read an interesting piece over at Fox News this week talking, once again, about famous people and their inability to spend their money wisely.  This time the focus was specifically on musicians who had blown their fortunes.

I thought it would be interesting to take a look at some of these stars, and how they blew their millions.  (Remember, at any income, the only way to ensure that you’ll continue growing wealth is to spend less than you earn!  These folks obviously didn’t do that.) 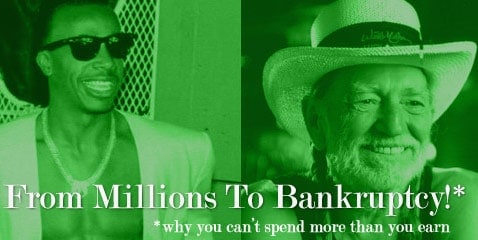 For more details about these stories, check out the original article.

What’s The Moral Of The Story?

So what’s the lesson that we can learn from all of these musicians and their financial troubles?

What other things do you think we can learn from these sad stories?  Tell us your thoughts in the comments.

Share29
Pin
Tweet14
Share3
46 Shares
Last Edited: 27th May 2011 The content of biblemoneymatters.com is for general information purposes only and does not constitute professional advice. Visitors to biblemoneymatters.com should not act upon the content or information without first seeking appropriate professional advice. In accordance with the latest FTC guidelines, we declare that we have a financial relationship with every company mentioned on this site.

Previous Post: Having A Hard Time With Your Refinance Or Loan Modification Under The Making Homes Affordable Program? Join The Club.
Next Post: Devotional: Grasshoppers and Giants