Some of them had issues with drugs, while others just spent more than was coming in.  Other had business dealings that went south or just “forgot” to pay their taxes (Don’t mess with Uncle Sam!) Bankruptcy ended up being the best of the worst options for many of them.

This week I heard the story of another famous musician who has recently had some money problems, the famous rapper and actor, 50 cent.  Let’s take a look at where he went wrong.

50 Cent Is Filing For Bankruptcy 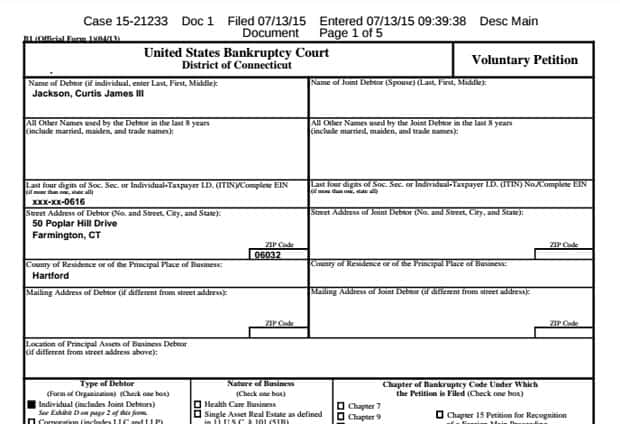 Grammy award winning rapper 50 Cent, whose given name is Curtis James Jackson III, is probably best known for his hits “In Da Club”, “21 Questions”, and “Candy Shop”. All of them made it to number one on the charts. He has sold tens of millions of albums, in addition to becoming a bit of an actor and business mogul.  He has earned tens of millions of dollars over the years.

As recently as early 2015, 50 Cent was listed by Forbes as being one of the wealthiest people in hip-hop. They put his estimated net worth at around $155 million.

Curtis James Jackson III, the rapper better known as 50 Cent, filed for chapter 11 bankruptcy protection Monday. In court papers filed in the U.S. Bankruptcy Court in Hartford, Conn., Mr. Jackson reported assets and debts each in the range of $10 million to $50 million.The attorney listed on the bankruptcy petition couldn’t immediately be reached for comment Monday.


Having $10-$50 million dollars in debt is unimaginable for most people – seeing as it’s more money than most people ever see in an entire lifetime.

50’s fall from the top has been swift and almost inconceivable. Earlier this year, Forbes named the rapper one of the wealthiest people in hip-hop, estimating his net worth at around $155 million. To go from that to filing for bankruptcy in such a short period of time surely has to be some kind of record. 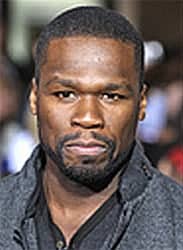 So what were the reasons for 50’s fall from grace?  For starters there were at least 2 big dollar lawsuits that he recently lost.

First, he was being sued by a woman for releasing a sex tape that she was shown in, without her consent. She ended up winning a 5 million dollar judgement against him this week (and which may have directly lead to the bankruptcy – either to protect himself, or because he legitimately was out of money).

On top of that, 50 recently lost a court case in which a jury socked him with a $17.2 million judgment over ripping off a headphones design from a company he was going to work with but didn’t.  As a result of that judgement some of his personal accounts had been frozen.

50 Cent also is known for his lavish tastes.  For example, he recently did a photo shoot with Forbes showing his huge collection of cars and motorcycles of all types. He spent millions on vehicles alone.

Some of 50 Cent’s businesses have also been failing. Most recently, his boxing promotions company, SMS Productions, filed for bankruptcy earlier this year.

Is 50 Cent done for? Probably not. Many have suggested that the bankruptcy filing is more a strategic one, and more for self preservation so he wouldn’t have to pay the newly handed down lawsuit judgement. Many have suggested his vast wealth is well protected via his many separate business interests.

To say the least, it’s something he would prefer not to be dealing with, but he does have a penchant for making money and even if he was actually broke, I’m sure he would find ways to make more.

What Can We Learn?

This story doesn’t make you feel all warm and fuzzy inside, but it can serve as a cautionary tale.  Some things to be learned:

What else can we learn from 50 Cent’s mistakes?  Tell us your thoughts in the comments.

Share12
Pin2
Tweet22
Share2
38 Shares
Last Edited: 14th July 2015 The content of biblemoneymatters.com is for general information purposes only and does not constitute professional advice. Visitors to biblemoneymatters.com should not act upon the content or information without first seeking appropriate professional advice. In accordance with the latest FTC guidelines, we declare that we have a financial relationship with every company mentioned on this site.

Previous Post: Essentials Of Selling Your Stuff On Craigslist
Next Post: Counting The Cost Is The Key To Finishing Well