I‘ve often thought that if you want to be successful, it’s probably a good idea to study those who have already attained some measure of success and try to emulate what they have done in order to create success yourself. While you may not get a complete roadmap to your end goal, you may at least see some traits and attributes that you can try and cultivate in yourself that will help you to succeed as well.

Thomas Stanley studies millionaires, and has published numerous books including two of my favorites, the Millionaire Next Door and Stop Acting Rich. He knows what it takes to succeed because he has interviewed hundreds of people who have become millionaires, he has found that many of them share common attributes and trains. One of those attributes is that millionaires are highly disciplined people.

Discipline Is An Important Part Of Success 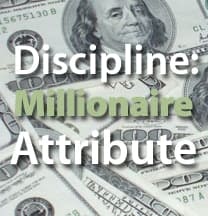 In his book The Millionaire Mind Stanley states that “nearly all of the top 1% of wealth holders in America reported that “being well disciplined was very important/important” in explaining their socioeconomic success“.  Having the discipline to work hard and work smart allowed the wealthy to be more productive, and have more focus than most.

A disciplined person sets his or her sights on a lofty target, then figures out productive ways to reach the target.  Disciplined people are not easily sidetracked. . . .  They could live in a French bakery and not gain weight or they could encounter hundreds of economic opportunities and then select one or two that are best suited to their strengths and the market’s needs.

So let’s explore these ideas a little more in depth.

For God did not give us a spirit of timidity, but a spirit of power, of love and of self-discipline.2 Timothy 1:7

One of the things that Stanley states is that disciplined people aren’t easily sidetracked.  They’re able to focus on an idea, and figure out productive ways that they can reach their goals, without going off in 100 different directions.

I have often mentioned in my books that economically self employed people are extremely well disciplined.  They have a daily routine that maximizes output for every moment of work. They write their own job description.  Eighty-one percent said that the job they designed “allowed full use of my abilities/aptitudes.”

To run your own business you usually have to be quite disciplined, and you have to be able to wear a lot of hats.  You have to set up processes and routines that enable you to get as much done as possible, and when you’re not able to complete something, or it isn’t essential – to delegate the task to someone else. When they don’t know how to do something or it’s beyond their expertise, the wealthy or those on their way don’t find it beneath them to ask others for their input and knowledge. They know how to surround themselves with others who complement them and their goals.

Discipline In Other Areas Of Their Lives Beyond Work

Stanley has also found that the millionaires he profiled on the whole are not only disciplined in their work lives, but also in their health, nutrition and finances. In his article he profiles Hollywood producer Brian Grazer, who is not only self employed, but he believes shows many of the traits of the prototypical millionaire next door. He’s hard working, focused, and he’s disciplined.

According to the article, Mr. Grazer awakes at 6:30 am every day.  The decamillionaires I surveyed wake up at 6:37 am [median].  His diet is simple yet nutritious.  From the published photographs, it appears that he has little or no body fat.  It’s rare that I have found a millionaire who is noticeably overweight.  Nearly 1 in 3 [32%] decamillionaires are patrons of Wal-Mart.  And apparently Mr. Grazer is among them!  The article mentions “$1.99 cost of his Dr. Dean Edell reading glasses which he buys at a Wal-Mart . . . .”

Those who are successful are able to be disciplined in their lives whether it’s at work, in their personal finances or in their health and fitness.  They know how to use their time wisely, and efficiently.

Are you disciplined enough to succeed?  Can you think of areas in your life where you could improve your self discipline, and do you think it would allow you to get further ahead?

Share42
Pin293
Tweet64
Share13
412 Shares
Last Edited: 10th February 2014 The content of biblemoneymatters.com is for general information purposes only and does not constitute professional advice. Visitors to biblemoneymatters.com should not act upon the content or information without first seeking appropriate professional advice. In accordance with the latest FTC guidelines, we declare that we have a financial relationship with every company mentioned on this site.