One of the biggest things that I’ve learned about money over the past few years is that financial success is often about more than just making money, but about creating successful behaviors and having the right mindset as well.

To succeed with money it helps to be able to create a goal and keep your attention focused on it, to not allow the pretty and shiny distractions to derail your progress.  Keep your eye on the prize!

The problem is that far too often people have a hard time focusing on and achieving a goal because there are so many things distracting them along the way.  Instead of focusing their attention on their goal, they allow themselves to be diverted. For example, they may set a goal of saving a million dollars for retirement, but along the way their attention falls prey to the lure things like a bigger house that is beyond their means, or fast cars that are beyond their budget.

By not keeping their focus where it should be, on their long term goal, they allow themselves to be duped, and end up with empty pockets.

How Focusing Attention In The Wrong Place Leads To Empty Pockets 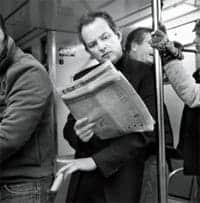 Pickpockets have been around since ancient times, and they are very good at doing one thing – directing and distracting of people’s attention to where they want it to be.  When people allow themselves to be mis-directed, they often find that they end up with empty pockets.  It is often the same thing for us when we allow our attention to be misdirected from our financial goals, and we allow a flashy sales pitch to persuade us to buy thing we don’t need.

Apollo Robbins is a world class pickpocket who has risen above the level of mere thief and turned mis-directing people’s attention into an art form.  I was reading an extremely interesting article in The New Yorker talking about his career this week.

In more than a decade as a full-time entertainer, Robbins has taken (and returned) a lot of stuff, including items from well-known figures in the worlds of entertainment (Jennifer Garner, actress: engagement ring); sports (Charles Barkley, former N.B.A. star: wad of cash); and business (Ace Greenberg, former chairman of Bear Stearns: Patek Philippe watch). He is probably best known for an encounter with Jimmy Carter’s Secret Service detail in 2001. While Carter was at dinner, Robbins struck up a conversation with several of his Secret Service men. Within a few minutes, he had emptied the agents’ pockets of pretty much everything but their guns. Robbins brandished a copy of Carter’s itinerary, and when an agent snatched it back he said, “You don’t have the authorization to see that!” When the agent felt for his badge, Robbins produced it and handed it back. Then he turned to the head of the detail and handed him his watch, his badge, and the keys to the Carter motorcade.

In magic circles, Robbins is regarded as a kind of legend, though he largely remains, as the magician Paul Harris told me, “the best-kept secret in town.” His talent, however, has started gaining notice further afield. Recently, psychiatrists, neuroscientists, and the military have studied his methods for what they reveal about the nature of human attention.

Robbins is extremely talented at reading people, and directing their attention in a way so that he can guide them along the path that he wants them to go. He’s so good at it that usually people don’t even know what’s going on or what happened.

In a similar vein, marketers are very good at what they do, and know exactly the way to market products in order to make us focus on them, and to lose focus of our goals.  When we do, more often than not it leads to spending money that we didn’t need to, and we’re left with empty pockets. The marketers have picked our pockets, but only because we allowed them to distract our attention from our goals.

Focus On Your Goals

One of the attributes of millionaires that Thomas J. Stanley discusses in his book The Millionaire Next Door is that they’re able to focus on a goal. They focus on their goal and work towards making it a success, while others tend to focus on many things, not putting enough attention on any one thing to make it a success.

I think that’s an important lesson that we all need to remember the next time we’re daydreaming about that new car or upgrading our house into something on the edge of affordability.  Does this shiny thing fit my long term goals, or is it a distraction?

So what are you doing to stay focused on your long term goals?  Are you making them a priority, and working towards achieving them, or are you allowing your attention to be diverted?

Share24
Pin8
Tweet14
Share4
50 Shares
Last Edited: 4th January 2013 The content of biblemoneymatters.com is for general information purposes only and does not constitute professional advice. Visitors to biblemoneymatters.com should not act upon the content or information without first seeking appropriate professional advice. In accordance with the latest FTC guidelines, we declare that we have a financial relationship with every company mentioned on this site.