When I worked outside the home, I had a co-worker, Penny, who was very open about her finances and the fact that she was in debt–deeply in debt.  A few hundred thousand dollars in debt.

To her credit, Penny worked hard.  She was the first to sign up to teach additional classes, and she often volunteered to chair committees and run extracurricular activities because that meant she’d get some extra pay.  For awhile, she even took a seasonal job at Barnes & Noble.

However, after a while, I couldn’t help but notice that the needle on the big debt-o-meter scale never moved.  Sometimes it even went up.  After awhile, I started to feel like I was watching the slow sink of the Titanic.

Penny may be a good barometer for the many in America who are deeply in debt.  Certainly she gave me a clear glimpse of her finances in a way that very few people do.

If you have debt to pay off, are you serious about paying it off?

Here are 4 signs, ala Penny, that you may not be serious about paying off your debt: 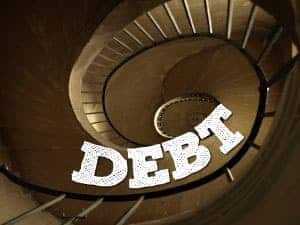 1.  You shuffle money between credit cards.

Moving a credit card balance with a high APR to a credit card with a 0% fixed APR is one thing.  To continue to shuffle around your credit card debt without making much progress actually paying it down is a good sign that you’re not dedicated to the repayment process.

2.  Over a year’s time, your debt load has not changed or has only changed by a small amount.

3.  You continue to buy things that you can’t afford.

Yes, you need to live your life while you’re paying down debt.   However, if you pay for non essentials like a new trailer for the family to go camping because you found a great deal and you were going to eventually buy one anyway,  you’re probably not serious.

Unless you’re at risk of losing your home or you need the money to pay bills for a sick family member, there is generally no good reason to cash out your retirement account.  If you do so, you may not have yet curbed your impulse to buy.  There’s usually no good buy that warrants robbing your future, even if you have the best intentions of paying it back.

Cashing out your retirement to pay off debt isn’t a very wise move, either.  I cringed when Penny did this.  She paid penalties, emptied her retirement, and applied it to her debt.  However, her debt was so massive, that even after this move she was still deeply in debt, only now without a retirement fund.

If you have debt to pay off, it’s your choice whether or not you want to attack the debt.

Some people don’t.  Some people make the same payment month after month and don’t accrue any new debt.  These people will eventually be out of debt, though it may take them longer.  However, the end result is still to be debt free, which is great.

However, if you want to eventual be free of the debt demon, you must change your behavior and stop going deeper into debt.

Share86
Pin45
Tweet37
Share17
185 Shares
Last Edited: 7th June 2013 The content of biblemoneymatters.com is for general information purposes only and does not constitute professional advice. Visitors to biblemoneymatters.com should not act upon the content or information without first seeking appropriate professional advice. In accordance with the latest FTC guidelines, we declare that we have a financial relationship with every company mentioned on this site.

Previous Post: What Paperwork Do You Need To Get A Home Mortgage?
Next Post: Finding Happiness In Even The Worst Of Circumstances