At the very beginning of 2011 Congress signed into law a two year extension for the Bush Tax cuts that meant that we wouldn’t have to worry about our tax rates going up in 2011 or 2012.  Now we’re halfway through 2012 and since it’s an election year we’re beginning to talk about how all of these tax cuts are going to be expiring at the end of the year.  No politicians want to be held responsible for increases in taxes, especially on the middle class.

Since there are so many tax rate cuts, credits and other tax incentives expiring on 12/31/2012, they’re beginning to call the situation we face on New Years Day 2013 as Taxmageddon. 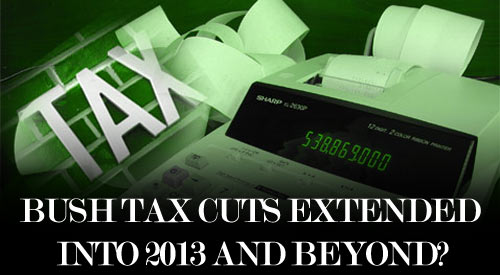 So what are some of the changes that will be happening at midnight on December 31st?  Here are a few of the big ones.

What Will The Politicians Do About Expiring Bush Tax Cuts?

So with the marginal tax rates set to go up at the end of the year, President Obama and Congress are now starting to hash out what they’re going to do.  As you might expect the Republicans are pushing for an across the board extension of the tax cuts.  Democrats on the other hand are pushing for an extension only for those making less than $250,000. From Huffington Post:

President Barack Obama would veto legislation that extends all of the Bush administration’s tax cuts, including those for the middle class, White House Press Secretary Jay Carney said Monday.

But top Republican aides said they don’t buy it.

During his daily briefing, Carney was initially vague about whether Obama would go so far as vetoing such a bill if it landed on his desk. Republicans are pushing to extend all of the Bush tax cuts before they expire at the end of the year, while Democrats only want to keep the cuts targeting people making $250,000 or less. Until now, the White House hasn’t definitively said whether Obama is prepared to veto an across-the-board tax cut extension, even if it includes the tax cuts sought by him and Democrats.

“He would not support it. He would not sign that bill,” Carney said, when asked if Obama could support a bill that extended all of the Bush tax cuts. Pressed further on whether the president would simply not sign such a bill or if he would actually veto it, Carney finally said, “He would veto.”

So from the sound of it looks like we’re going to be gearing up for another tax cut battle where both sides refuse to give an inch until the bitter end.

For now, Congress appears no closer to finding middle ground on the issue. The Republican-controlled House is lining up a vote later this month to extend all of the Bush tax cuts, while the Democratic-controlled Senate appears ready to move a bill to extend only the middle-class cuts.

Sounds like both sides are preparing competing bills for Congress to consider later in July.  I’m not confident that either will pass right away. We shall see.

Personally I hope they extend the Bush tax cuts for everyone, and get about the business of trying to find ways to cut back on spending.

What are you thoughts?  Do you think they’ll let any or all of the tax cuts expire, or would that be too dangerous in an election year?

Share4
Pin
Tweet
Share
4 Shares
Last Edited: 10th July 2012 The content of biblemoneymatters.com is for general information purposes only and does not constitute professional advice. Visitors to biblemoneymatters.com should not act upon the content or information without first seeking appropriate professional advice. In accordance with the latest FTC guidelines, we declare that we have a financial relationship with every company mentioned on this site.

Previous Post: The Cost Of The Decision To Have Children And How Many Children To Have
Next Post: How To Create A DIY Green Screen Setup On The Cheap: Screens, Stands And Lighting Setup