Yesterday we talked about how the energy efficient home improvement tax credit was extended into 2011, albeit at a lower reduced maximum of a $500 max credit per homeowner, at at a reduced amount for many eligible products.   While the credit is still around, the effect it will have at this reduced amount is anyone’s best guess.

Today I want to touch on another tax credit that was extended, this one for two more years, through 2012. That is the $1000 child tax credit. 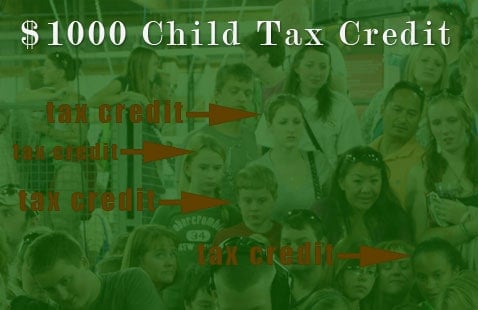 Within the past couple of weeks Congress and President Obama passed into law an extension of the Bush era tax cuts, the Tax Relief, Unemployment Insurance Reauthorization, and Job Creation Act of 2010 or H.R.4853.  There were several popular tax breaks extended in the bill including a slimmed down home improvement tax credit, an extension of the current tax rates (instead of a huge tax hike), and a payroll tax holiday, cutting Social Security tax withholding from 6.2% to 4.2% for one year.

One that a lot of families are happy about is the  extension of the valuable child tax credit for dependent children that many parents have taken advantage of for the past few years.   The Child Tax Credit (CTC) was at a level of $500 per child, until legislation raised it to the current $1000 per child level.

Eligibility to receive the full Child Tax Credit is subject to income limits and phaseouts.

After these income levels the credit is reduced by 5% of adjusted gross income.

The Child Tax Credit is a credit, as opposed to a tax deduction. A tax deduction reduces your taxable income, while a credit reduces the amount of tax owed.

The IRS recently posted ten facts on their site about claiming the Child Tax Credit.  I thought I’d share them here.

1. Amount – With the Child Tax Credit, you may be able to reduce your federal income tax by up to $1,000 for each qualifying child under the age of 17.
2. Qualification – A qualifying child for this credit is someone who meets the qualifying criteria of six tests: age, relationship, support, dependent, citizenship, and residence.
3. Age Test – To qualify, a child must have been under age 17 – age 16 or younger – at the end of 2010.
4. Relationship Test – To claim a child for purposes of the Child Tax Credit, they must either be your son, daughter, stepchild, foster child, brother, sister, stepbrother, stepsister or a descendant of any of these individuals, which includes your grandchild, niece or nephew. An adopted child is always treated as your own child. An adopted child includes a child lawfully placed with you for legal adoption.
5. Support Test – In order to claim a child for this credit, the child must not have provided more than half of their own support.
6. Dependent Test – You must claim the child as a dependent on your federal tax return.
7. Citizenship Test – To meet the citizenship test, the child must be a U.S. citizen, U.S. national, or U.S. resident alien.
8. Residence Test – The child must have lived with you for more than half of 2009. There are some exceptions to the residence test, which can be found in IRS Publication 972, Child Tax Credit.
9. Limitations – The credit is limited if your modified adjusted gross income is above a certain amount. The amount at which this phase-out begins varies depending on your filing status. For married taxpayers filing a joint return, the phase-out begins at $110,000. For married taxpayers filing a separate return, it begins at $55,000. For all other taxpayers, the phase-out begins at $75,000. In addition, the Child Tax Credit is generally limited by the amount of the income tax you owe as well as any alternative minimum tax you owe.
10. Additional Child tax Credit – If the amount of your Child Tax Credit is greater than the amount of income tax you owe, you may be able to claim the Additional Child Tax Credit.

Are you claiming the Child Tax Credit this year?  How much does it stand to save you in taxes since it will remain at $1000 instead of reverting back to the $500 level?

Share4
Pin
Tweet2
Share
6 Shares
Last Edited: 25th April 2011 The content of biblemoneymatters.com is for general information purposes only and does not constitute professional advice. Visitors to biblemoneymatters.com should not act upon the content or information without first seeking appropriate professional advice. In accordance with the latest FTC guidelines, we declare that we have a financial relationship with every company mentioned on this site.