Earlier this month I completed filing my taxes for the 2011 tax year, and all taxpayers had to have their returns filed by tax day April 17th.  As we all decompress from hours spent figuring out our taxes, and planning for the coming year’s filing, there is something big looming on the horizon at the end of the year.

Some folks are calling the end of the 2012 tax year “Taxmageddon” or  a “Tax Armageddon” because a whole host of tax credits, tax cuts, deductions and other tax provisions are all expiring at once, meaning that American families could be seeing a huge tax increase in 2013, unless something is done. 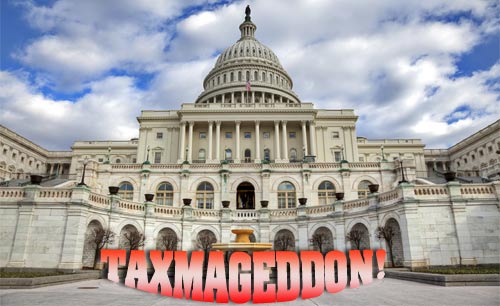 Why Would We Be Seeing a Big Tax Increase In 2013?

So the question is, what is going on, and why will we be seeing a big tax increase in 2013 if nothing is done?

As many Americans were scrambling to get this year’s taxes done, analysts were warning about a bigger tax day — what some call a tax Armageddon, or “Taxmageddon,” to characterize its potential effect on the U.S. economy.

At the end of the year, some $500 billion in tax breaks expire all at once, hitting American households with an average tax increase of $3,800 — if Congress doesn’t act….

“Almost the entire tax code has been put on a year-to-year lease, and in some cases, month-to-month lease, which is no way to run a tax system,” Scott Hodge of the Tax Foundation said.

The expiring cuts would hit all income groups but those at low and middle incomes the hardest.

“Taxmageddon falls 70 percent on middle and low income families. That’s because 60 percent of the Bush tax cuts were for middle- and low-income taxpayers,” Dubay said. The payroll tax cut was aimed at the same taxpayers.

“No American will be unscathed at the end of this year,” Hodge said. “Taxmageddon hits all of us.”

So the host of expiring tax breaks will mean huge tax increases, a majority on middle and low income families, if  Congress doesn’t act.

What Tax Breaks Are Expiring After 2012?

So what are the main tax breaks expiring at the end of  2012?

Among the changes that we could see:

As mentioned, the above provisions expiring, among others,  account for nearly 500 billion in expiring tax breaks.  That will mean an average tax increase of $3800 for American households in 2013.

Will Congress Act To Avoid All The Tax Provisions Expiring At Once?

So the question is, will congress act to avoid seeing a huge tax increase at the beginning of next year?

With all that facing the economy, wouldn’t Congress act? Ordinarily, yes — but this is a presidential election year.

“It’s my guess that nothing will happen on any of these issues until after the election,” Hodge said. “Here we have a case where many in Congress will be retiring, maybe even a president. How do you fix system with that uncertainty?”

And Capretta adds, “it’d be hard for an old … outgoing Congress to make decisions when a new Congress is about to come in. And I think the public might react a little badly to that as well.”

Nevertheless, one congressional source says the chances of a lame duck session are 100 percent: Congress can’t afford to take the end of the year off.

So it sounds like odds are good that Congress will act in some way to re-enact or extend at least some of the provisions so as to avoid the huge increase for everyone. Until that happens, however, there will be quite a bit of uncertainty.

Do you think that Congress will act to extend the expiring tax breaks?  Will they let them expire?  Will they create new ones?  Tell us your thoughts in the comments.

Share4
Pin3
Tweet
Share
7 Shares
Last Edited: 18th April 2012 The content of biblemoneymatters.com is for general information purposes only and does not constitute professional advice. Visitors to biblemoneymatters.com should not act upon the content or information without first seeking appropriate professional advice. In accordance with the latest FTC guidelines, we declare that we have a financial relationship with every company mentioned on this site.

Previous Post: Paying Down Debt With Gazelle Intensity? How Much Of An Emergency Fund Do You Need?
Next Post: Top 5 Things To Do With A Tax Refund