Earlier this month we were hearing a lot about the fiscal cliff legislation that was being debated in the hallowed halls of Congress. The general feel going around was that the measures being enacted were going to mean higher taxes mainly for those with high incomes, those making above around $400,000-$450,000 a year.

When the fiscal cliff legislation was finally completed and signed by the president, the folks in Washington D.C. were quick to start congratulating themselves on how they had saved the middle class from a fiscal nightmare, and how tax rates wouldn’t be going up on anyone who wasn’t making a higher than average income.

Your Taxes Are Going Up This Year

The problem is that while the tax rates are staying the same for most of us,  it doesn’t mean our taxes aren’t going up. In fact, all of us with an earned income will be seeing less in our paychecks this year. 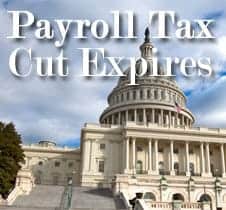 These past few days we’ve heard an uproar as people started to get their first paychecks of the new year and quickly realized that they weren’t getting as much money deposited into their bank accounts.  People are seeing on average a reduction in their paychecks of around $80-100 a month!

What has happened to increase our taxes without our rates going up? While Congress extended and made the tax rates permanent for those making less than $400-450,000 they failed to extend the temporary payroll tax cut.  Because the payroll tax cut wasn’t extended again most of us will be paying 2% more in taxes this year.

President Obama signed the Tax Relief, Unemployment Insurance Reauthorization, and Job Creation Act into law way back at the end of 2010. The law implemented a 2 year extension of the Bush era tax rates, extended expiring unemployment benefits, reinstated the estate tax and extended the $1000 child tax credit.  At the time the Making Work Pay tax credit, passed as part of one of the stimulus bills, was expiring.  It was  essentially a refundable tax credit of $400 for individuals and $800 for couples.  Obama wanted to pass something to replace it to blunt the impact of losing the extra $800 that most families were getting, and so the idea for the temporary payroll tax cut was born.

To replace the Making Work Pay tax credit Obama and Congress passed the temporary payroll tax cut of 2% in 2010, to be effective for the 2011 tax year.  It was then extended for the 2012 tax year as well when the politicians decided that it might not be wise to let it expire in an election year.

So what exactly was cut in the payroll tax cut?  The FICA portion of your paycheck’s withheld taxes was cut by 2%.   That part of your taxes, which is typically 6.2% of your income and funds Social Security and Medicare, was dropped to 4.2%  for the 2011 and 2012 tax years.

What did the payroll tax cut mean for the average taxpayer? The tax cut meant around a $1000 annual tax savings. Since the Social Security tax is capped at $106,800, the maximum savings that could have been seen by a higher income individual was around $2136.

So here it was two years later and people have gotten used to seeing that extra money in their paycheck.

When the fiscal cliff deal was passed the payroll tax cut was quietly allowed to expire.  Not many people realized this fact because everyone from the press to legislators didn’t really talk about it. Instead they trumpeted their success at “saving the middle class” from large tax hikes.

So here we are 2 weeks into the new year and most people have now received their first paycheck of the year. What did they find?  Most people are finding that their paychecks are a bit lighter – most are receiving about $80-100 less every month.  Of course this has most people upset because they didn’t even realize it was coming.

So now our paychecks are less, and we’re all set to see about $1000 less in income this year.  While I can’t say that I think this money wasn’t needed to fund the faltering Social Security and Medicare systems, it is frustrating to continually see our taxes increase.  Wouldn’t it be nice if they started cutting federal programs and actually tried to get the budget under control?

What are your thoughts about the payroll tax cut expiring? Did it catch you by surprise?

Share21
Pin1
Tweet
Share3
25 Shares
Last Edited: 15th January 2013 The content of biblemoneymatters.com is for general information purposes only and does not constitute professional advice. Visitors to biblemoneymatters.com should not act upon the content or information without first seeking appropriate professional advice. In accordance with the latest FTC guidelines, we declare that we have a financial relationship with every company mentioned on this site.

Previous Post: How To Save Money On Just About All Of Your Regular Monthly Bills
Next Post: Debt Is Like Quicksand: The Struggle To Escape Can Often Lead To Greater Problems