As 2012 came to a close Congress still hadn’t passed any sort of fiscal cliff legislation.  There had been rumblings of a deal being in sight, but as the clock struck midnight in Washington D.C., a deal still hadn’t been passed.

We wrote about how the fiscal cliff would affect most people last week, and if nothing had been done most people would have seen tax increases in the thousands of dollars as tax rates increased, payroll tax cuts expired and a whole host of other measures went out the window. Personally I was facing an increase in my taxes of over $6000 if my rates hadn’t been extended.

On January 1st a compromise fiscal cliff measure was passed by Congress and President Obama signaled his intention to sign it into law.  Even though a measure was passed, over 77% of people will still see an increase in taxes in 2013.  From WSJ:

Congress broke a rancorous stalemate Tuesday to pass legislation designed to avert the so-called fiscal cliff. But the compromise bill, which blocked most impending tax increases and postponed spending cuts largely by raising taxes on upper-income Americans, left a host of issues unresolved and guaranteed continued budget clashes between the parties. The bill represented the largest tax increase in the past two decades and was passed over opposition from conservative Republicans in the House who objected to the fact that it contained no long-term spending cuts of any significance.

Today I want to look at and what is in the fiscal cliff bill that was passed on January 1st.

What Is In The Fiscal Cliff Bill? 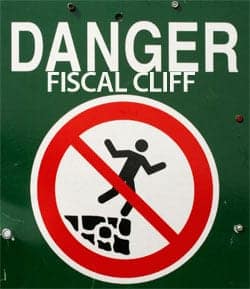 So fiscal cliff legislation was passed on 1/1/2013 that is heralded as helping to avert a crisis in the country as millions of taxpayers would have had to start paying thousands more in taxes every year. What many people don’t realize is that even with the legislation being passed most people will still see an increase in taxes in 2013.

Among the expiring tax cuts and tax increases that were slated to take place in 2013 – causing the fiscal cliff:

Ok, so that’s what might have happened. The biggest effects would be seen due to the Bush tax cuts expiring and the payroll tax cut expiring.

So what was in the fiscal cliff bill that was just passed?

How Will The Fiscal Cliff Legislation Affect You?

The thing most folks want to know about the fiscal cliff is, how will the fiscal cliff affect me?  According to CBS, most of us will be paying more in taxes for 2013, on average $800-1000 more, despite the rates for most taxpayers being extended and made permanent.

Just how much more you’re paying this year will depend on how much you’re making.  Everyone who has earned income will be affected by the expiration of the payroll tax cut, which was 2%.  As mentioned, for someone making $50,000 that would mean an increase of about $1000.  Thankfully the rates were extended, meaning more drastic pay cuts won’t be happening.

Will The Fiscal Cliff Legislation Solve Debt And Deficit Problems?

So with the legislation being passed, just how much revenue will be created?  Will it have an appreciable affect on the deficit – or our debt problems?  Not likely.  Problems are just being kicked down the road. From CBS:

The plan would raise roughly $600 billion in taxes over 10 years, far less than the more than $2 trillion in revenue initially discussed by President Barack Obama and House Speaker John Boehner.

According to CBS News White House correspondent Mark Knoller, the Congressional Budget Office scoring of the bill projects a $329 billion increase in deficit in 2013; $3.9 trillion over 10 years.

So about 60 billion in revenue a year for 10 years would be created by this bill, that’s a lot less than the $329 billion increase in the deficit this year alone.  So the deficit and our debt will continue to grow.

It sounds like the question of mandatory cuts – the $110 billion in sequester cuts – will come up again in two months, so stay tuned for that as well as the debt cliff.

What are your thoughts on the fiscal cliff aversion bill? Does it do enough? Are they just kicking the can down the road?

Share10
Pin3
Tweet10
Share2
25 Shares
Last Edited: 2nd January 2013 The content of biblemoneymatters.com is for general information purposes only and does not constitute professional advice. Visitors to biblemoneymatters.com should not act upon the content or information without first seeking appropriate professional advice. In accordance with the latest FTC guidelines, we declare that we have a financial relationship with every company mentioned on this site.