A week or so ago we announced that the so called fiscal cliff had been averted, at least to some degree, and that the current tax rates were being extended for a majority of taxpayers.  Only those who earn more than $400,000-450,000 saw their tax rates rise.

Even with the changes enacted by the American Taxpayer Relief Act (ATRA) on January 2nd, however, most taxpayers will be paying more this year due to the expiration of the temporary payroll tax cut.  The expiration of that cut means that we’ll all be paying 2% more, which for a family making $50,000 a year means an added $1000 in taxes in 2013.

With all the changes being made due to the ATRA legislation, the IRS is now scrambling to make updates in their system so that filing can begin. Today they announced when they will start accepting returns for 1040 filers. 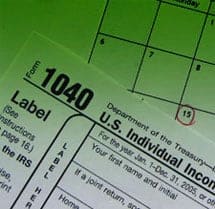 So with the passage of American Taxpayer Relief Act there are quite a few provisions of that bill that will affect 2012 taxes (while a majority affect 2013 and moving forward).   Because some of the provisions affected 2012 taxes the IRS is now scrambling to make updates to their systems in order to start processing returns January 30th.

The IRS will begin accepting tax returns on that date after updating forms and completing programming and testing of its processing systems. This will reflect the bulk of the late tax law changes enacted Jan. 2. The announcement means that the vast majority of tax filers — more than 120 million households — should be able to start filing tax returns starting Jan 30.

The IRS estimates that remaining households will be able to start filing in late February or into March because of the need for more extensive form and processing systems changes. This group includes people claiming residential energy credits, depreciation of property or general business credits. Most of those in this group file more complex tax returns and typically file closer to the April 15 deadline or obtain an extension.

Among the changes that affected 2012 that require system updates:

There are some taxpayers that won’t be able to file and have their returns accepted on January 30th.  Those filers may have to wait until late February or early March.  The IRS details who they are on their site.

There are several forms affected by the late legislation that require more extensive programming and testing of IRS systems. The IRS hopes to begin accepting tax returns including these tax forms between late February and into March; a specific date will be announced in the near future.

The key forms that require more extensive programming changes include Form 5695 (Residential Energy Credits), Form 4562 (Depreciation and Amortization) and Form 3800 (General Business Credit). A full listing of the forms that won’t be accepted until later is available on IRS.gov.

A majority of taxpayers will be able to file and have their returns accepted on January 30th.

One thing a lot of those of us who are self employed or who have enough side income need to remember is that we still have a 2012 estimated tax payment coming due on January 15th.  Payments for estimated taxes are due on the following dates typically:

So while the IRS isn’t accepting returns until January 30th, you are still required to make that payment before then if your income requires it.

Get Your Information Organized

So while the IRS isn’t actually accepting returns until January 30th, that doesn’t mean you can’t start compiling all of your tax information that you’ll need when you do file.

So what information can you get together in preparation for filing?

While the returns aren’t going to be processed until January 30th, a lot of the tax filing companies like TurboTax have already made the changes to their systems and are already accepting returns. They’ll just hold onto your returns until the filing date, and then send them on through.

I love how private for-profit companies are able to get their systems updated within a few days, but the slow moving federal government has to take weeks to get their ducks in a row.

I’ve been using TurboTax for 4-5 years now, and they’re my preferred tax filing software (see others I recommend below this post). I’ll be filing my return later this week after I make my last estimated tax payment for 2012 on the 15th.

Stay tuned for a full TurboTax review where I ‘ll do a walk-through of the product, and also be giving away several copies to lucky readers to get free federal and state tax filing!  Start your return now, and wait to complete it until you see if you won!

Start Your Return With TurboTax Now

Share16
Pin4
Tweet
Share2
22 Shares
Last Edited: 9th January 2013 The content of biblemoneymatters.com is for general information purposes only and does not constitute professional advice. Visitors to biblemoneymatters.com should not act upon the content or information without first seeking appropriate professional advice. In accordance with the latest FTC guidelines, we declare that we have a financial relationship with every company mentioned on this site.

Previous Post: Pocket Your Dollars Book Review: 5 Attitude Changes That Will Help You Change Your Life
Next Post: How To Save Money On Just About All Of Your Regular Monthly Bills