As a personal finance blogger I sometimes get emails from readers who are in dire straits dealing with staggering debt, with little hope for finding a way out.  While I ‘ve had debt in the past, and know the negative psychological effect it can have on an individual and a family, I’ve never been in a place where bankruptcy or foreclosure seemed imminent,  or where I had to juggle the monthly bills in order to stay afloat.

Unfortunately a large number of people in this country do have to deal with situations like that every year. They have to manage their monthly bills, paying only the ones that are the most important – and letting others go unpaid.  They do their best to save money on all their household expenses.  But often it isn’t enough.

When the debt keeps piling up, it can seem like you’re sinking into quicksand – and often when you struggle to stay afloat and escape your situation it can lead to poor decisions, and even more problems. 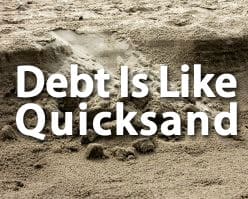 I was reading the New York Times today and they were talking about how when people are in times of scarcity, they tend to make poor financial decisions that they might not have made in times of plenty. They quickly allow themselves to get into “poverty traps”.

The usual explanations for reckless borrowing focus on people’s character, or social norms that promote free spending and instant gratification. But recent research has shown that scarcity by itself is enough to cause this kind of financial self-sabotage.

“When we put people in situations of scarcity in experiments, they get into poverty traps,” said Eldar Shafir, a professor of psychology and public affairs at Princeton. “They borrow at high interest rates that hurt them, in ways they knew to avoid when there was less scarcity.”

It’s often portrayed that people are stuck in poverty simply because of a culture of consumerism and free spending, because of poor character or upbringing, or because of a need for instant gratification. While some of that may be true, professor Shafir at Princeton also believes that when people are in situations of scarcity, they tend to fall for high interest loans, and other financial schemes that they wouldn’t have dreamed of using in times of plenty.  They grasp at straws to try and pull themselves out of the quagmire of debt, and all reason flies out the window.

The psychological burden of debt not only saps intellectual resources, it also reinforces the reckless behavior, and quickly, Dr. Shafir and other experts said. Millions of Americans have been keeping the lights on through hard times with borrowed money, running a kind of shell game to keep bill collectors away. The average debt for households earning $20,000 a year or less more than doubled to $26,000 between 2001 and 2010, according to the Urban Institute. The averages for households in slightly higher brackets grew by 50 to 90 percent in the same period.

People dig deeper precisely because they long to escape.

One debt begets another as people take out high interest loans to pay for their mortgage, or a credit card debt.  They do a payday loan to try and make it to the next paycheck. They do a title loan on their car and lose it once they can’t pay back the loan.  In other words, they play a shell game transferring debt from one loan or card to another, hoping to stave off the final collapse as long as they can.

People dig deeper precisely because they long to escape.

In the end the debt always seems to catch up and people end up in foreclosure and eventually bankruptcy.  It can’t be pushed off forever.

Planning Ahead To Avoid The Quicksand 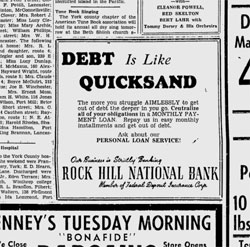 So how can you avoid getting into a situation where you’re falling for those poverty traps and the struggle to avoid going under just causes you to sink deeper in the quicksand of debt than you were before?

First, make sure that you’re planning ahead for a rainy day before you get into a bad situation. Money magazine states that 78% of us will have a major negative event happen in any given 10-year period of time, so if you’re not planning for it, you should be.

Plan ahead for times of scarcity so that when they arrive you have a plan to implement, and your emotions don’t just take over.

Making Hard Decisions When You Need To

At the first hint that you may have a problem coming down the road it’s time to put your plan into place.

If you’re already in debt, do your best to get your financial house in order and get started on a debt reduction plan.  Find a non-profit credit counseling agency to help you create a workable plan. Work through a company like the National Foundation for Credit Counseling to find a good credit counselor.  Get some help and come up with a game plan!

Allow someone to throw  you a lifeline, and help to pull you out of the quicksand of debt.  If you don’t you could fall prey to poverty traps, and your struggle could lead to sinking even further into the mire.

Have you ever found yourself in a situation where the psychological burden of being in debt caused you to make reckless financial decisions?

Share37
Pin8
Tweet50
Share6
101 Shares
Last Edited: 25th January 2013 The content of biblemoneymatters.com is for general information purposes only and does not constitute professional advice. Visitors to biblemoneymatters.com should not act upon the content or information without first seeking appropriate professional advice. In accordance with the latest FTC guidelines, we declare that we have a financial relationship with every company mentioned on this site.

Previous Post: Why Is My Paycheck Less This Month? Did My Taxes Just Go Up?
Next Post: TurboTax Review: Your Taxes, Simplified