This is an article from Debt Free Hispanic over at http://www.debtfreehispanic.com. You can read more of his inspiring posts by checking out his site, or subscribing to his RSS feed here.

Building A FICO Score And Piling Up Debt

How did this happen?

The same way it happened to so many Americans. I fell into a trap and believed the myth that buying on credit was what wealthy people did and I wanted to be just like them. I tried so hard to rack up credit so that I wasn’t a ghost in the credit industry. It’s true, I went into a CarMax dealership to purchase a vehicle.   After putting down a large down payment  I couldn’t get a loan for the remaining balance of the car because as the guy running my credit put it, I was a “ghost” in the system.  I didn’t have enough credit history out there to show that I would pay the money back. This is called a credit rating and a FICO score. After that day I decided to buy as much as I could to bring my score up.

I figured since I was attending college and I didn’t have the finances to pay for it that I would put my school tuition from a private University on school loans through Wells Fargo and that would bring my credit rating up. I had a Mitsubishi Galant and one day after school I noticed I was missing a hubcap. Well I couldn’t drive around like that so I went to Discount Tires and bought new alloy rims and tires on credit. By this time I was $20,000 in debt and was about to finish college and was working 20hrs/week making $6/hour. This was not a fun time in my life.

Getting A Wake-Up Call

One day reality set in when my minimum payments were not paying down the balance and the opposite was happening, the balance was growing every month. During a Thanksgiving dinner my brother told me about a guy named Dave Ramsey. After listening to the show, I purchased his book on CD and listened to it within two days.  I’ve since listened to the book about 10 times and next year (2010) I will attend my 4th Total Money Makeover Live Event here in Dallas, TX.

After listening to the book for the first time, I was determined to get out of debt. I was hungry for financial discipline and for somebody to set me straight. I am also a Believer and the scriptures about the rich ruling over the poor and how the borrower is slave to the lender made me madder about debt. I told myself I was no longer going to be a slave and little by little I loosened the chains that the banks have put on me.

From then on every month I gave my wife (girlfriend at the time) a number that was the key to unlock my chains. The first number was $20,000. I sold almost everything I had on eBay, baseball jerseys, textbooks, clothes; you name it I sold it. I sold so much stuff on eBay they sent me a certificate for selling at least $2,000 consistently for 2-3 months. 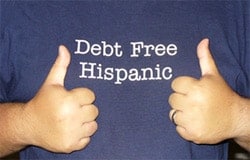 The key number was getting lower and lower and I was starting to pay off my debts. $16,000 became $14,000 the next month. Then, after graduating college, I received a full-time job and with my first month of pay, I paid off $3,000. Every month I was paying off $2,000 from my school debt. Within a year I paid off $20,000 of debt. I remember emailing my wife when the key number was $0 and my chains were gone, I had been set free.

I called Wells Fargo and asked that all my accounts be closed and to send me proof in writing that they had been. Within two weeks I received 10 notes from banks saying that my accounts had been paid in full and that they were now closed.

The next year I started building wealth like no other time in my life. I had four roommates and my monthly rent was $350, bills included. For a bachelor wanting to build wealth, this was very encouraging. I saved up and bought a HUD home in November 2006 and spend $4K fixing it. Two month later I bought an engagement ring and ask my girlfriend to marry me.  Her dad said he would let me marry her when the ring was paid off.   After showing him the receipt we began making wedding plans.

Today my wife is working towards a PhD in Organizational leadership and we are paying cash for her school expenses. I graduated from grad school with a Masters in Management, a degree that was paid for this time in cash. We now use cash to do whatever we want to do in life because at one point in our lives, we were living like no one else. Our story has just begun and I’m glad that my wife and I started out debt free. Her debt was only $1,000 so that was paid off right away. We each put 15% of our income in 403b’s and Roth IRA’s.

I now write about money on Debt Free Hispanic (http://www.debtfreehispanic.com). This is a blog about personal finance from a Hispanic perspective. It is in English, although many people associate the word Hispanic and assume Spanish speaking. I write about ways to save money and pay down debt. Since our income will make us wealthy, I talk about how to free it up by paying down personal debt. I am also frugal in my thinking and I like to share my ideas with my readers. I’m a Dave Ramsey fan and my wife and I were able to scream “I’M DEBT FREEEEEEEE” on his show. You can hear the call on my blog.   Click Here To Hear The MP3

Join me in becoming debt free and the good stewards that God intended us to be.

Share
Pin
Tweet
Share
0 Shares
Last Edited: 30th October 2009 The content of biblemoneymatters.com is for general information purposes only and does not constitute professional advice. Visitors to biblemoneymatters.com should not act upon the content or information without first seeking appropriate professional advice. In accordance with the latest FTC guidelines, we declare that we have a financial relationship with every company mentioned on this site.

Previous Post: Make Extra Money By Doing Graphic Design Work On The Side
Next Post: Senators Agree To Extend First Time Homebuyer Tax Credit And Allow Up To $6500 Tax Credit For Current Homeowners