The real estate market has been one of the hardest hit in the downturn of the past few years.  Not only have we seen a foreclosure crisis and millions of people living in underwater homes, but we’ve seen a lot of home builders go out of business or into bankruptcy because people just aren’t in a position to buy new homes anymore.   The unemployment rates have continued to rise to the point where they’re hovering around 10%.  Home prices have dropped significantly, and what people once thought was a safe investment is no longer a sure thing.

Rates Are Near All Time Lows

So with all of this negativity surrounding the real estate and mortgage markets, could there be any silver lining to this dark cloud?  I think there is, and mostly if you’re someone who has held off on buying until now.

First and foremost in my mind is the fact that mortgage rates are at or near all time lows.   If you’ve been putting off buying a house for a long time because you were hoping for a great rate, the time may be near to jump in and get a good deal on a mortgage.  (Of course, only if you’re ready).

Since I’m a big proponent of Dave Ramsey, I usually default to his thoughts on real estate and mortgages.  His advice is to get into a 15 year mortgage that is no more than 25% of your income.  You should also have a nice down payment if you can swing it.  Yes, the payments on a 15 year mortgage may be higher, but you’ll pay thousands less in interest, you’ll get a lower rate and the home will be paid off faster.

I don’t have a problem with people taking on 30 year mortgages either – I’m one who did – as long as you do your best to pay it off as fast as you can – and you keep your mortgage to a reasonable level (around 25-30%).  To help keep your mortgage low, shop around, and see if you can find a company with low mortgage rates. (like the one mentioned below, CapWest Mortgage. Click for details – and discounts for Costco members!) 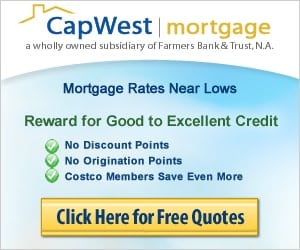 Home Prices Are Much Lower

Another reason you might want to consider buying a home right now is that not only are interest rates low, but home prices are so much lower than they’ve been in years as well.

Still, many people are holding off buying because they think the market hasn’t hit bottom.  Dave Ramsey thinks it may be ok to buy now if you’re ready because analysts don’t think that values will drop more than a few more percentage points.

What an exciting time to be a homebuyer! There’s a huge selection, prices are down, and mortgage interest rates have never been lower. Oddly enough, though, house hunters haven’t been buying—mostly because they’re afraid the market hasn’t hit bottom.

But most analysts agree that home values will only drop a few more percentage points in most areas—if that. So there’s no need to wait for the “official” bottom. If you find a home you’re in love with, however, don’t get lured into a bidding war. There will be plenty more homes coming on the market at a good price.

It’s a buyers market, and while home prices may drop a little bit more, many don’t think it will be enough more to make it worth it to wait – especially if you’re ready now.  Just be sure not to get lured into buying something you don’t want because it’s a buyers market, and there is a ton of home inventory available.  Don’t settle!

Some people are now saying that the market in many places is already stabilizing, and we’re at or near the bottom.  It may be time to buy as rates are starting to rise.  Look at the data:

Mortgage applications in the U.S. rose last week, reflecting gains in purchases and refinancing that signal the housing market may be stabilizing.

The Mortgage Bankers Association’s index of loan applications surged 16 percent in the week ended March 4, the biggest gain since June. The measure fell 6.5 percent in the previous period that included the Presidents’ Day holiday. The group’s purchase index climbed 13 percent last week, the most since November, while its refinancing gauge jumped 17 percent.

The average rate on a 30-year fixed loan increased last week to 4.93 percent from 4.84 percent. Borrowing costs have been moving up after reaching 4.21 percent in October, the lowest since the group’s records began in 1990.

The average rate on a 15-year fixed mortgage held at 4.17 percent.

As the jobless rate eases and companies ratchet up hiring, more Americans may look to buy houses, stabilizing the industry that triggered the recession. At the same time, a growing number of foreclosed properties continues to depress prices and may hamper the housing recovery.

So rates were at their lowest in October, and have been slowly rising ever since. So it may be time to consider buying if you’re in the market.  The question is – are you willing to risk that they may go down again, and that price might not have hit their bottom?

The wild card in this whole equation is the huge number of foreclosed properties and how much those have hurt prices, especially in some areas like Nevada, California and Florida.  So if you’re a buyer, it’s good news that prices are so low, but who knows if they’ll stay as low for long.  Also, if you’re trying to sell your home before you buy and move – the current buyers market may make things tougher to sell at anything but a loss.

What do you think – have we hit the bottom in the real estate market, or do we have a ways to go?  Are you currently looking for a new home?  Are you considering waiting longer, or are you ready to jump in before rates and prices go up?

Share3
Pin
Tweet
Share12
15 Shares
Last Edited: 13th March 2015 The content of biblemoneymatters.com is for general information purposes only and does not constitute professional advice. Visitors to biblemoneymatters.com should not act upon the content or information without first seeking appropriate professional advice. In accordance with the latest FTC guidelines, we declare that we have a financial relationship with every company mentioned on this site.

Previous Post: New Kodak Zi8 Video Camera And Lines At The Apple Store For Ipad 2
Next Post: The Dangers Of Investing For A Christian Part 1: Profiting From Sin