I was reading some other blogs this morning when I came across some interesting facts and figures about the P2P lending arena in general, and about Prosper and Lending Club in specific.  Here are a few of them.

What the stats show me is that peer to peer lending continues it’s steady growth, and most investors are going to see a positive return – almost 99% of investors with 100 or more notes  are making postive returns. Not everyone in the stock market can say that. Even the institutional and larger investors are beginning to take notice of this fledgling industry, and I’m sure more of them will be jumping in on the P2P bandwagon.

Peter Renton of Social Lending put together a great 5 minute presentation for the Ignite event at FINCON12. It was pretty entertaining so I thought I’d share it here (wish I could have seen it live!). It’s called 20 Things You Didn’t Know About P2P Lending.

A couple of months ago I was happy to report that for the first time my Lending Club returns had topped the 12% number that I had been trying to breach for some time now.  For the past couple of months they’ve been up above 12%, and things were looking good. This past month, however, we had a bump in the road.

I had one new charged off loan (for a total of 2), as well as having 4 other loans go late, or continue to be late. Luckily the loan that got charged off didn’t have a ton of principal left to repay, so my losses on that one are somewhat minimized. The other 4 late loans have a bit more principal to pay off, an average of about half of the principal when all four are combined. I’m hoping those ones get back into a payment schedule and don’t get charged off! 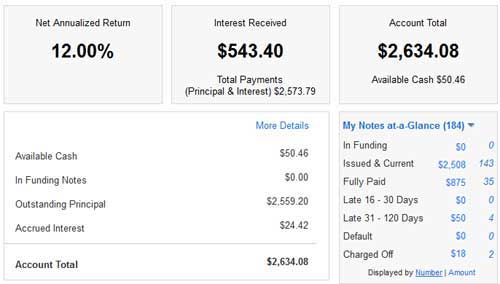 NOTE: Over 98.9% of all investors with 100 or more Notes have experienced positive returns. 100 Notes can be purchased with a minimum investment of $2,500.

Nickel Steamroller’s Lending Club portfolio analyzer does a better job of giving you an idea of your actual ROI.  Basically the analysis tool with give you an estimated ROI after you download all your notes from your Lending Club account and upload the .csv file. It will go through you notes and give sell recommendations, show duplicate notes and highlight notes that are below Lending Club’s average return (so you can sell them on the secondary platform). It will even give you a fun little map showing where your loans are (see mine above).

In looking at my returns on the analyzer, my actual return according to the site will be closer to 10.68%. It also gives me quite a few sell recommendations, particularly on some of my older lower interest loans that I did when first starting out. Those particular loans tend to be grade A or B, and have interest below 8%.

Here’s the basic strategy I’ve been using with Lending Club since I started investing. The strategy has changed a little bit over time to include more low grade loans and a few loans with higher balances.

Share8
Pin3
Tweet19
Share2
32 Shares
Last Edited: 20th April 2017 The content of biblemoneymatters.com is for general information purposes only and does not constitute professional advice. Visitors to biblemoneymatters.com should not act upon the content or information without first seeking appropriate professional advice. In accordance with the latest FTC guidelines, we declare that we have a financial relationship with every company mentioned on this site.