My family and I recently took a vacation to Boston, MA.   While there, we had the pleasure  of visiting many historic attractions, including Plimoth Plantation in Plymouth, MA.

Plimoth Plantation, for those of us who need a bit of history review, was where the Puritans lived.  Plimoth Plantation shows what the settlement was like.  Each small home was completely furnished and even had gardens growing in the backyards.  Historic reenactors were in some homes going about their day as the Pilgrims would, chatting with neighbors, cooking food, eating dinner, doing chores.

What I noticed more than anything was how small the Plimoth homes were.  Most were the size of one modest room in my current apartment.  Possessions were few and seemed to be limited to one dresser (if they had that), a double bed, a table and chairs, and cookware.  The floor was dirt. 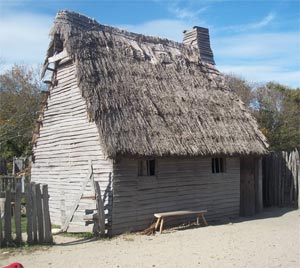 Seeing this reminded me of how little is really needed to survive.

Settling Into Our Own Smaller Space

While we were in Boston, we opted to stay in a vacation rental by owner (VRBO) rather than a hotel to save money.  Our VRBO was approximately 500 sq. feet and was comprised of two very small bedrooms and one small kitchen that flowed into a small living area.  For our family of 5, it was a tight, though not impossible, fit.

Between viewing the Plimoth Plantation and staying in our VRBO for nearly a week, I realized that we don’t need as much space as we currently have in our apartment, which is a generous 1,600 square feet on two floors.  We also don’t need all the “stuff” we have that fills our space.

I’m sure that I’m not alone in living in a bigger space than I need.

According to USA Today, the average American home now has more television sets than people.  “There are 2.73 TV sets in the typical home and 2.55 people” according to Nielsen Media researchers.  MSN states that “the average median-sized home is 2,469 square feet.”  As families are getting smaller and smaller, how much room does a family need?

Richer In Space And Stuff; Poorer In Monetary Assets

We’re rich in space and stuff, yet many Americans are struggling financially.

If you can afford it, live any way that you like.

But if you’re struggling financially, take a hard look at your surroundings and your “stuff”.  How much space do you need?  If you got rid of the extra stuff you’re holding onto, how much less space would you need?

Large Houses Are A Recent Development 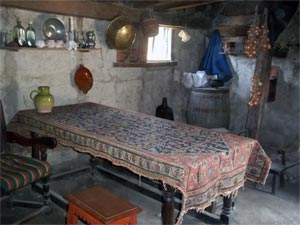 Keep in mind, “decades ago, fitting a family into 1,000 square feet wouldn’t have seemed like such a stretch.  In the middle part of the last century, it was common for new family bungalows to be less than 1,000 square feet” (MSN).  Only within the last 50 years have house sizes ballooned.  Growing up, my mom never had her own bedroom, but now, each child is expected to have their own.

Imagine living in a smaller space with less stuff.  Not only would you likely have a cleaner space, but think how your expenses would dip.  Pilgrims and even our relatives 60 years ago chose to live in a smaller space because less resources were required.

We may not have to go out and chop the wood for the fire to heat our homes anymore, but we do have to work to make money to pay for our utilities, house payment, and taxes.  All of those expenses shrink when you live in a smaller space.

If you’re in debt, making due with a smaller space can help you get out of debt faster.  But even if you’re not experiencing financial difficulty, living in a smaller space with less stuff can give you more money to invest or to use how you see fit such as taking a spectacular vacation.

What do you think?  Living in a larger space than you need and enjoy the room, or live in a dwelling that’s smaller but gives you more financial flexibility?

Share6
Pin7
Tweet
Share
13 Shares
Last Edited: 31st October 2013 The content of biblemoneymatters.com is for general information purposes only and does not constitute professional advice. Visitors to biblemoneymatters.com should not act upon the content or information without first seeking appropriate professional advice. In accordance with the latest FTC guidelines, we declare that we have a financial relationship with every company mentioned on this site.

Previous Post: Is It OK For A Christian To Declare Bankruptcy?
Next Post: Signs Your Company’s Retirement Plan Isn’t For You