Debbie and her husband, Mark, have four kids.  They don’t believe in gifting their children big, expensive gifts.  (Even if they did, it wouldn’t matter because money is tight in Debbie and Mark’s family.  Even though they’re frugal, raising four kids is not cheap.)

Debbie chooses to buy a few gifts each year that she knows her kids will really like.  She buys the gifts throughout the year when she finds good deals.  Some of the gifts are gently used items that she finds at garage sales or secondhand stores.  Santa tends to bring the kids one or two brand new items.

Each year, Debbie hopes for a simple Christmas, but then her in-laws send presents, and her parents bring presents, and the children’s favorite family friend, Judith, gives presents.

Over the years, Debbie and Mark have been able to gently ask their own parents to not give the kids so many presents.  Though it has taken a few years, the grandparents now just give one or two gifts that are reasonably priced and modest. 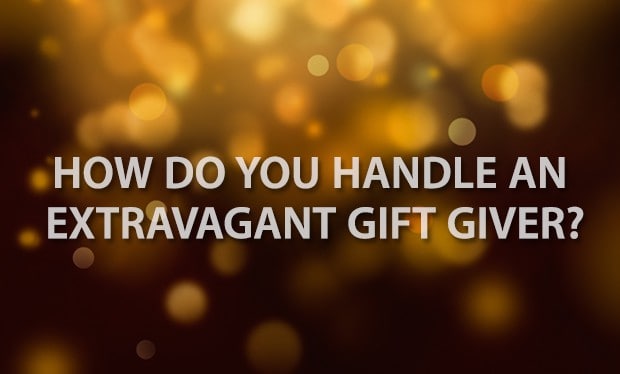 Judith is in her sixties, and while she has three kids of her own, she doesn’t have any grandkids.  Judith LOVES Christmas and always has.  To her, it’s not Christmas unless the tree is piled high with expensive, electronic gifts and gadgets.  She routinely spent $1,000 on each of her children’s gifts each year when they were young.

She happily goes over the top at Christmas and saves all year to do so.

Each year, the gifts she gets Debbie and Mark’s kids get more and more extravagant.

This year, Judith is spending nearly $200 on EACH of Debbie and Mark’s children for gifts.

Debbie doesn’t want to hurt Judith’s feelings, and she knows how much joy Judith gets out of gift giving, so Debbie hasn’t said anything to Judith.

Yet, Debbie has a wide range of emotions she feels about Judith giving her kids nicer gifts than she or Santa give the children.

Does this sound familiar?  Do you have a well-meaning person in your life who gives your children more expensive gifts than you can?  If so, you have three basic options.

Compete With The Extravagant Gift Giver

One option is to compete with the extravagant gift giver so your presents are just as nice and as expensive as the gift giver’s.  This isn’t an option for Debbie and Mark because they simply don’t have that much money.  It’s also not an option because they really, really don’t want to spoil their kids on Christmas.

Talk To The Extravagant Gift Giver

Another option is to gently ask the extravagant gift giver to stop giving such over-the-top gifts.  Debbie and Mark have thought of doing this, but they worry about hurting Judith’s feelings.  They know how much Judith loves Christmas and gift giving.  She’s a close family friend, and they don’t want to hurt the relationship.

Alter Your Own Gift Giving Plans

While Debbie and Mark have had some years where they were frustrated by Judith and her extravagant gift giving, they’ve decided over the years to just see the positive in the situation.

They’re thankful that Judith loves their children so much to think of them, and spoil them, at Christmas.

They’ve also decided that since Judith is giving such expensive presents, they don’t have to give their own kids as many gifts.

Sure, it can be frustrating that someone gives your children nicer gifts than you can afford, but in the end, Debbie and Mark decided to be grateful that the Christmas shopping expense is a bit lower this year thanks to Judith and her generosity.

Have you ever had someone who gave your kids more expensive gifts than you?  If so, how did you handle the situation?

Share9
Pin5
Tweet
Share3
17 Shares
Last Edited: 28th December 2015 The content of biblemoneymatters.com is for general information purposes only and does not constitute professional advice. Visitors to biblemoneymatters.com should not act upon the content or information without first seeking appropriate professional advice. In accordance with the latest FTC guidelines, we declare that we have a financial relationship with every company mentioned on this site.

Previous Post: Why You Shouldn’t Give Your Child Everything This Christmas
Next Post: Overspending In December: Finding The Cause