Does your bank statement show proof of the changed heart that the Holy Spirit is producing in you?

The way we spend our money shows our top priorities. So could someone look at where your money goes and see that you are a Christian? Is there evidence that you are living differently because of God’s love for you as shown through Jesus Christ? Consider this passage from Luke 3:7-11.

7 When the crowds came to John for baptism, he said, “You brood of snakes! Who warned you to flee God’s coming wrath? 8 Prove by the way you live that you have repented of your sins and turned to God. Don’t just say to each other, ‘We’re safe, for we are descendants of Abraham.’ That means nothing, for I tell you, God can create children of Abraham from these very stones. 9 Even now the ax of God’s judgment is poised, ready to sever the roots of the trees. Yes, every tree that does not produce good fruit will be chopped down and thrown into the fire.”

11 John replied, “If you have two shirts, give one to the poor. If you have food, share it with those who are hungry.”


I’ve been meditating on this passage for some time now. What John is saying here is very interesting. Let’s take a closer look. 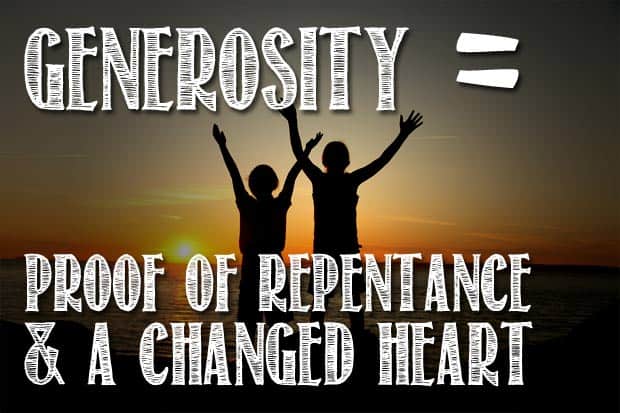 So here we’ve got John preaching out in the desert. He’s calling the people of Israel to be baptized and repent from their sins so they can receive forgiveness. We know that this was his purpose as God designed it. He was to prepare the way for Jesus – to make the hearts of the people ready to receive the message of the Gospel.

Calling people to repent by telling them they’re the brood, or offspring, of snakes seems pretty harsh. It’s not a message that’s likely to attract many followers. But in Matthew’s account of John’s ministry we see that it was specifically the Pharisees and Sadducees John was attacking. It’s likely that they came out to be baptized simply because it was the popular thing to do and not because they had truly repented from their sin.

John saw through the Pharisees’ and Sadducees’ fake repentance when he began rebuking them. He called them to prove that they had actually repented by changing the way they lived. These religious leaders were so self-righteous that they were blind to their own sin and saw no need to change their ways.

Now maybe you didn’t repent because it was the popular thing to do. But when you repented did you start living in a way that showed you had turned away from sin? Is there any proof in your life today that you are following Jesus?

I think John’s challenge to the Pharisees and Sadducees applies to all who repent from their sin. Jesus himself makes it clear that we must do God’s will if we want to follow Him. There’s no room for lip-service Christians. We must truly repent – and true repentance produces evidence by a changed life. Not by our own power, but by the power of the Holy Spirit as we give over our will to God.

John warns the crowds that they can’t simply rely on their religious heritage to save them. He clearly says that if they don’t produce good fruit (as a result of their repentance) then they will be subject to God’s judgment.

The Question And John’s Answer

The crowd was clearly affected by John’s words as they ask him what they should do. They seem to grasp the fact that God is serious about repentance and doesn’t want people who aren’t willing to truly follow Him. I think they were sincerely asking what it means to produce the kind of good fruit that testifies to true repentance.

Now John’s answer here is what really struck me. He’s got the crowd asking how they can honor God by producing good fruit. John has a great opportunity to teach the people. You know he’s not going to waste it.

What does he tell them? That they should go to the synagogue (church for us) every week, pray before their meals, and read the Bible every day? No. While those are good things to do, they’re not necessarily the proof of a changed heart.

Instead, John tells them that true repentance for sins will result in loving others. And John specifically uses the example of generosity in his response. The crowd asks what they should do to produce good fruit, and John tells them to give. If that’s not a clear call to generous giving in the life of Christians, I don’t know what is!

We know that generosity is not the only proof for repentance. Love manifests itself in many ways besides giving. But an unselfish heart is a clear sign that something has changed inside you. It is a testimony to the unselfish love of God, who gave up His only Son so that we could be saved from our sins and reconciled to Him.

So let’s examine our lives for the good fruit of generosity and unselfishness. Let’s turn away from our sin, abhor it, and seek to live the way God desires. Let us walk in love and show it in our cheerful giving. And in this way we’ll prove that we are followers of Jesus Christ because of the way we live and bring glory to God.

Share18
Pin6
Tweet
Share2
26 Shares
Last Edited: 19th May 2014 The content of biblemoneymatters.com is for general information purposes only and does not constitute professional advice. Visitors to biblemoneymatters.com should not act upon the content or information without first seeking appropriate professional advice. In accordance with the latest FTC guidelines, we declare that we have a financial relationship with every company mentioned on this site.

Previous Post: 6 Smart Spending Questions To Ask Yourself Before Making A Purchase
Next Post: Is The Beneficiary Updated On Your Retirement Account? Your Heirs Are Hoping So.