Most people hope to someday retire with a nice nest egg, enough to provide for a comfortable retirement, as well as to leave plenty of money to give to others, including their heirs.

While it’s important to make sure you have a will so that you can designate who gets what in the event you should die, what many people don’t realize is that if you don’t keep your beneficiary information on your retirement accounts up to date, you may end up dis-inheriting your heirs unintentionally.

Disinherited Heirs Due To A Beneficiary Mix-Up 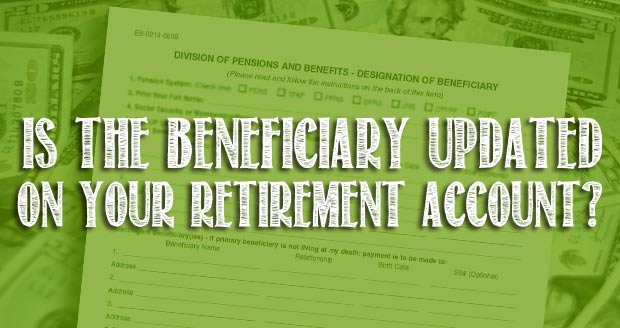 A recent article in the Wall Street Journal explained how most people don’t understand just how important it is to make sure your beneficiaries are updated. One family found out the hard way.

Even where there is a will, there can be a won’t.

That is the hard lesson learned by the three adult children of a wealthy telemarketing executive who died suddenly last month. His will states that all his assets are to go to his children, according to Laura Mattia, a principal at Baron Financial Group, a financial-advisory firm in Fair Lawn, N.J., who was consulted after the executive’s death by his estate attorney.

However, much of his wealth was in his 401(k) retirement account, and the fate of those assets isn’t dictated by wills.

It is a little-understood situation: After a lifetime of saving, what ultimately happens to your individual retirement account, 401(k) and other retirement savings often hinges on what you scribbled down, decades earlier, as you filled out a form designating your beneficiaries.

If you haven’t updated that paperwork to reflect how your life has changed, you might not be able to leave your wealth to your heirs as you wish. Instead, you could bequeath them a bureaucratic nightmare.

The executive who died last month, Ms. Mattia says, should have asked his wife to sign a waiver and then named his children as the beneficiaries of his 401(k). Because he didn’t, his wife inherits it—although he married her only two months before he died. By neglecting to update his beneficiary form, the executive effectively disinherited his children.

What a sad situation this was. The wealthy executive intended to leave his fortune to his kids. Because he had neglected to update an old beneficiary form on his 401(k), where most of his wealth was held, his wife of only 2 months ended up inheriting the retirement accounts.

Not An Isolated Case

Investment Company Institute, a trade group, says that savers have an estimated $5.9 trillion in 401(k) and other types of “defined contribution” plans, plus another $6.5 trillion in IRAs. So there is a lot of money at stake.


Unfortunately the case above isn’t an isolated one. The article lists a couple of other unfortunate situations that other investment advisors had shared.

While these cases are certainly the worst case scenario, it does make you take notice and realize just how important those beneficiary forms really are.

When To Update Your Beneficiary Forms

So if it’s been a while since you signed those beneficiary forms with your retirement account company, and especially if your life circumstances have changed, it may be time to take a fresh look at them.

Instances that you may want to update your beneficiary forms include:

There may be other situations as well, but typically you’ll want to change them in event of a major life event such as a birth, death, marriage or divorce.

Tips For Updating Your Beneficiary Forms

When updating your beneficiary forms, there are a few things to make sure that you do correctly.

First, make sure that you use full, proper names for your beneficiaries to ensure they can be identified properly.

Second, make sure to designate (if possible) to whom and in what amount benefits should be paid.

Finally make sure you explain what would happen if a beneficiary dies.

Before you send it in (if it is a hard copy) make sure to make copies for yourself and for beneficiaries so they know what will happen if you were to pass unexpectedly.

Have you updated your beneficiary information on your retirement accounts, or is it time to make sure that it is done?

Share21
Pin7
Tweet28
Share9
65 Shares
Last Edited: 20th May 2014 The content of biblemoneymatters.com is for general information purposes only and does not constitute professional advice. Visitors to biblemoneymatters.com should not act upon the content or information without first seeking appropriate professional advice. In accordance with the latest FTC guidelines, we declare that we have a financial relationship with every company mentioned on this site.

Previous Post: Generosity Is Proof Of Repentance And A Changed Heart
Next Post: How To Keep A Wedding From Ruining Your Summer Budget