A couple of weeks ago I realized that the tax filing deadline was coming up, and that I had better get about the business of filing my taxes.

In most years I tend to hold off on filing until the last minute, especially if I know I’m going to owe money.

This year was going to be different, however. After doing a quick dry run on my taxes in January before I made my last estimated tax payment for federal and state taxes, I believed that this year I would either be about even, or be getting a refund.

The problem was that my assumptions were based off of incorrect information.

I filed my taxes the week before the filing deadline on April 15th. 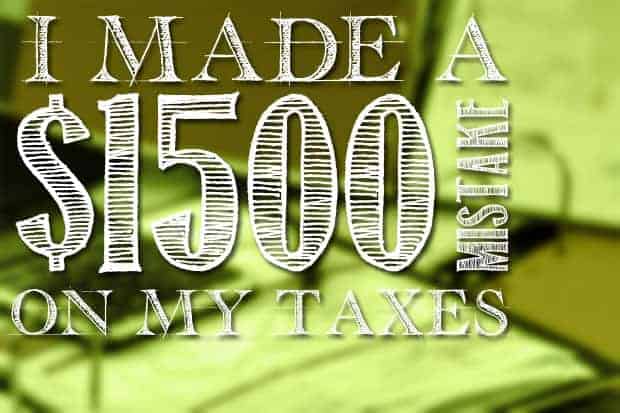 I likely would have filed earlier this year in January, but I didn’t have all of the forms needed at that point in order to file. I had to wait until the end of January, and into February in some cases, for the income and interest reporting forms from all the various companies that I work with for my blog.

When I finally had all of the necessary paperwork in order to file my taxes, I think I looked at that huge pile of paperwork and just lost the motivation to get it done.  So I didn’t.

The week before my taxes were due I finally got down to business. I took the better part of two evenings to compile, check and recheck my taxes. Finally, after being pretty sure that everything was correct, I e-filed.  Within a couple of days my return had been accepted by the IRS and by my state revenue department.

All done for one more year, right? Wrong.

Getting A Letter From The IRS

Last week I opened my mailbox and got the mail. When I was paging through the pile of bills, catalogs and newspapers, my eye stuck on something in the bottom of the pile.  It was a notice from the IRS.  I knew this wasn’t going to be good news.

Getting a letter from the IRS is almost never a pleasant thing as far as I can tell.  It’s almost always something negative in that letter.

The last time I got one of these letters from the IRS it was about 10 years ago when my wife had been laid off, and I had forgotten to report un-employement income from the beginning of the year before she had found a new job.  I had reported income from the previous tax year, but not the small portion from the following year.  In that case I ended up having to pay a couple hundred in additional taxes.

I opened the letter with dread to find out what they were writing to tell me. The letter stated that in checking my return and trying to match up the total tax payments that I had claimed in my return to the ones they had actually received, the total tax paid was not matching up.  That meant that I would not be getting a $1000 refund this year. Instead I owed an additional $500 plus penalties.

Figuring Out The Error On My Return

As soon as I read the IRS letter I set about figuring out what had happened.  In looking at my total reported tax payments, and the ones that they had actually received, it quickly became apparent that the missing amount was for the same amount as one of my estimated tax payments throughout the year. So one of those payments hadn’t arrived.

Since I pay my estimated taxes by doing a direct debit from my checking account, I knew it wasn’t that a check was lost in the mail or something.  I had either forgotten to send an estimated tax payment, or they didn’t have record of receiving it.

When I double checked my tax return I realized that I had made an error. One of my estimated tax payments had come from a refund from my previous year’s tax return that was applied towards current year’s taxes. The TurboTax system transferred the record of that payment over from my previous year’s taxes, into my current years taxes. So when I entered that payment again elsewhere as an estimated tax payment, it was essentially logged twice. TurboTax automatically transferred the payment over (so I didn’t need to enter it), and then I entered it again not realizing it was being entered automatically.

When I re-checked my returns before filing everything seemed to look right, but wasn’t because I had one payment reported twice in different places.

What To Do When You Get An IRS Notice Or Letter

If you get a letter or notice from the IRS, there’s no need to panic, it just usually means there is a specific issue with your federal tax return or tax account that you need to address.

Each notice that gets sent out will have specific instructions on what you need to do. In some cases it will notify you that the IRS has made a change or correction to your return, and then tell you what those changes were.

If you agree with the notice (as I did), you likely don’t need to do anything else unless it gives you other instructions or if a payment is required.

Pay Any Due Taxes

In my case an extra payment of $504 was required after my $1000 refund was factored in.  There was a tear off panel and an envelope to send the payment back, so I did just that.

If you don’t agree with the changes to your return, it’s important that you respond and explain why.  You should write a letter to the IRS at the address on the top left of your notice, and allow 30 days for a response.  Include any information and documentation that you want considered in your situation.

If you have questions about the notice, you can call the phone number that is included on the notice. Just make sure to have your tax return handy when you call.

For more on this topic visit the IRS.gov page called ‘Responding to a Notice’. Also, see Publication 594, which gives details about the IRS collection process.

Here’s a quick video from the IRS explaining IRS notices.

Have you ever received a letter or notice from the IRS? Tell us about it in the comments!

Share14
Pin21
Tweet
Share3
38 Shares
Last Edited: 25th April 2014 The content of biblemoneymatters.com is for general information purposes only and does not constitute professional advice. Visitors to biblemoneymatters.com should not act upon the content or information without first seeking appropriate professional advice. In accordance with the latest FTC guidelines, we declare that we have a financial relationship with every company mentioned on this site.

Previous Post: 5 Types Of Financial Resources For Stay At Home Moms
Next Post: Managing Our Finances To Be More Generous Givers