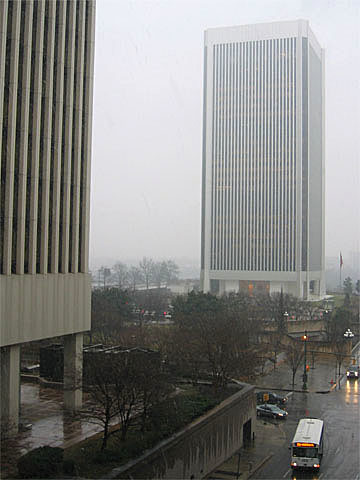 The fed made a move today to help unclog the credit markets, and the stock market has shown some early gains, moving back over 10,000 to start the day:

Wall Street is moderately higher in early trading, with investors encouraged by a Federal Reserve plan to buy massive amounts of short-term debt from companies.

The plan unveiled Tuesday calls for the Fed to buy the short-term debt that companies use to finance their day-to-day operations. That would help create demand in the credit market and make it easier for companies to raise money.

Investors who are still clamoring for an interest rate cut were relieved by the government’s new measure to help the economy. The credit markets seized up after the failure of Lehman Brothers Holdings Inc. Banks have been reluctant to lend to most customers, including other banks, fearing they won’t be repaid.

UPDATE: Yikes, DOW down 258 points (9697)within 1 1/2 hours of markets closing.  Will the downward spiral ever stop?  Sounds like the markets were hoping for an interest rate drop like in Australia – which hasn’t happened yet.

Federal Reserve Chairman Ben Bernanke warned Tuesday that the financial crisis has not only darkened the country’s current economic performance but also could prolong the pain.

The Fed chief’s more gloomy assessment appeared to open the door wider to an interest rate cut on or before Oct. 28-29, the central bank’s next meeting, to brace the wobbly economy.

Other stories from this morning:

Share
Pin
Tweet
Share
0 Shares
Last Edited: 7th October 2008 The content of biblemoneymatters.com is for general information purposes only and does not constitute professional advice. Visitors to biblemoneymatters.com should not act upon the content or information without first seeking appropriate professional advice. In accordance with the latest FTC guidelines, we declare that we have a financial relationship with every company mentioned on this site.

Previous Post: During Hard Times: The Only Solid Reality Is The Word Of God
Next Post: Is Your 401k Losing Money? DON’T PANIC!!!