Many of us suffer from a temporary income drop at one point or another.

What we don’t consider is how long it may take to bounce back from such a situation.  Consider these two cases: 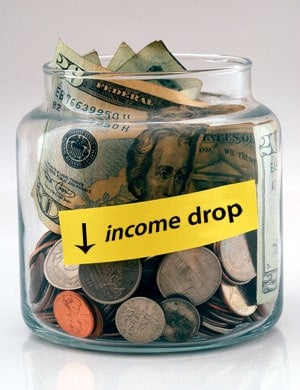 Stacy is a college sophomore.  She comes from a comfortable middle class family.  Her parents have a nice house, complete with a pool, and they usually go out to eat several times a week.  When Stacy left for an out-of-state college, she knew her lifestyle would change.

Now, after one year at college, she’s tired of dorm life and is looking for an apartment.  She can’t stomach dorm food any longer, so she routinely eats out.  Her credit card bill is creeping up, but she doesn’t worry because she figures once she gets a job after graduation, she’ll be able to quickly pay down the debt.  As long as she can make the minimum payments on her credit card, she feels she’s fine financially.

Low Income And No Debt

April and Todd married nine years ago.  They are from a small town in the Midwest, and good jobs are hard to come by.  For a few years, they eked by financially.  They made approximately $30,000 per year because each of them could only work two part-time jobs apiece.  However, they believed that better times would come.

Meanwhile, despite their low income, they never took out debt.  They nursed a car with 175,000 miles on it, and they lived in a small, two bedroom home with their two sons.  Their furniture came from garage sales and thrift stores, as did their clothes.  April couponed and only bought groceries that were on sale.

The Reality Of Recovering From A Low Income

Stacy will need to pay back that credit card debt while also trying to pay down student loans, buy a car (if she doesn’t have one), and rent an apartment or a house.  She’ll need to buy professional work clothes.  She’ll be surprised at how many expenses come her way.

April and Todd’s old beater car won’t last forever.  They’ll need a replacement and soon, but they don’t have any money saved for one because they’ve been on such a low income for so long.  They’ll either need to take out debt or buy a car that they can afford.  A car that they can afford will only be a step up from their current car, so they’ll need to make frequent repairs.

While they’ve been financially responsible and haven’t taken on debt thus far, they haven’t been able to maintain what they have.  Many of their possessions will need to be replaced.  If they plan to own a home, they’ll have to wait years more until they can get a down payment.  Meanwhile, their money will go toward rent, not toward the investment of owning their own home.

How To Minimize The Damage Of A Temporary Low Income

If you’re facing a temporary drop in income (and most of us do at some time in our lives), the best thing you can do is to behave like April and Todd, not Stacey.

Adjust To Your New Standard of Living.  Too many people have an income drop but keep living like they have their old salary.  Don’t do this.  Immediately cut the things that can be cut like magazine subscriptions, cable tv, meals out, extracurricular activities, etc.  You can always reinstate these when your income improves.

Avoid Credit.  As much as possible, try to avoid using credit.  Debt will just make recovering from your low income that much harder.  Try to find other, more creative ways to do things that don’t cost as much money.

When your income rebounds, keep living like you did when you were on a low income.  That will help you improve your situation that much faster.

Have you faced a temporary income drop before?  How did you handle it?  What smart steps did you take?  Did you find it took much longer to recover from the income drop than you had expected?

Share24
Pin3
Tweet26
Share2
55 Shares
Last Edited: 4th August 2015 The content of biblemoneymatters.com is for general information purposes only and does not constitute professional advice. Visitors to biblemoneymatters.com should not act upon the content or information without first seeking appropriate professional advice. In accordance with the latest FTC guidelines, we declare that we have a financial relationship with every company mentioned on this site.