About three years ago we first talked about how the $100 bill was going to be going through a full redesign, similar to the $5 bill.

The new design was implemented not only to give the $100 bill an updated look and feel, but also to update the security features contained within the bill in order to help thwart counterfeiters. When the design was released it was announced that over a decade of research and development went into creating the new $100 bill, and it was going to be the most secure bill released to date. And it would have been if it had ever been put into circulation.

Delays In Getting The New $100 Bill Into Circulation

While there may have been a decade of R&D that went into creating the bill that was announced in 2010, it still hasn’t been released 3 years later due to unforeseen delays in production of the bill. 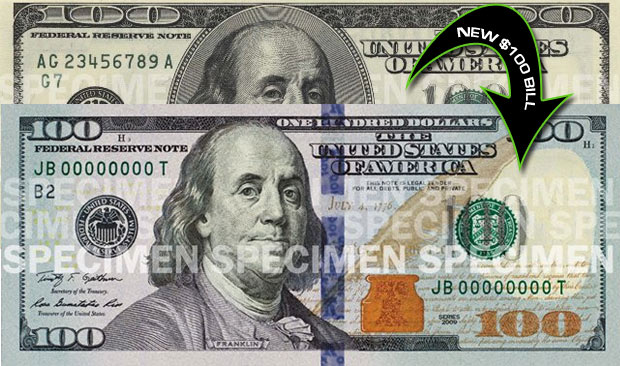 This past week the Federal Reserve announced that the new $100 bill would be released into the wild and put into circulation in October of 2013.

The Federal Reserve Board on Wednesday announced that the redesigned $100 note will begin circulating on October 8, 2013. This note, which incorporates new security features such as a blue, 3-D security ribbon, will be easier for the public to authenticate but more difficult for counterfeiters to replicate.

The new design for the $100 note was unveiled in 2010, but its introduction was postponed following an unexpected production delay. To ensure a smooth transition to the redesigned note when it begins circulating in October, the U.S. Currency Education Program is reaching out to businesses and consumers around the world to raise awareness about the new design and inform them about how to use its security features

So beginning on October 8th, the new bill will start being circulated when any commercial bank, savings and loan, or credit union orders $100 notes from the Federal Reserve.  So you should start seeing the new bills around that time as well, although the old $100 bills will continue in circulation for some time.

So what are some of the new security features that they’re telling us about in the new $100 bill?

So those are just the security features that they’re telling us about with these new bills, I’m sure there are others that we may not find out about that they’re keeping close to the vest.

Share12
Pin209
Tweet12
Share1
234 Shares
Last Edited: 30th April 2013 The content of biblemoneymatters.com is for general information purposes only and does not constitute professional advice. Visitors to biblemoneymatters.com should not act upon the content or information without first seeking appropriate professional advice. In accordance with the latest FTC guidelines, we declare that we have a financial relationship with every company mentioned on this site.

Previous Post: Finances Are Important… But Are You Taking The Time To Enjoy Your Life?
Next Post: 5 Signs You Are Financially Ready To Retire