The $5 bill has been around since 1861, over 150 years.  The bill has gone through a variety of different designs,  and there have been multiple presidents and even a civil war general, on it’s face.

Among those who have appeared on the bill:

In 2008 the Federal Reserve released their newest iteration of the 5 dollar bill into circulation, and it will be a bit more colorful than the old one: 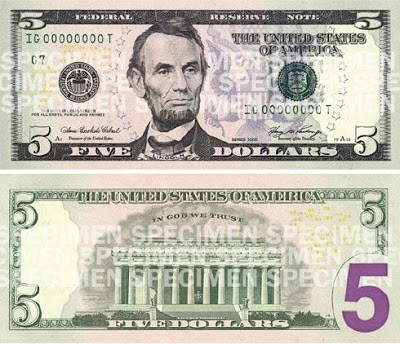 Try and counterfeit this one – I dare you!

The $5 bill isn’t the only one that will be undergoing a refresh, a new design and an upgrade in security. The $100 bill is expected to be released into circulation in late 2013.

Find out more about the new $5 bill here

Share
Pin
Tweet
Share
0 Shares
Last Edited: 30th April 2013 The content of biblemoneymatters.com is for general information purposes only and does not constitute professional advice. Visitors to biblemoneymatters.com should not act upon the content or information without first seeking appropriate professional advice. In accordance with the latest FTC guidelines, we declare that we have a financial relationship with every company mentioned on this site.