Of course, that estimate includes expenses such as housing, which you’d have to pay whether you have a child or not.  (Though some may argue that if you don’t have a child, you can buy a smaller house and pay less in housing costs.)

The Cost Of Raising A Child

However, many of the expenses are particular to having a baby–diapers, formula, clothes, daycare, etc., which you’ll begin paying the minute your child is born.  Sure, you can be frugal and choose cloth diapers, breast feeding, and used clothing, but the expenses will still add up. 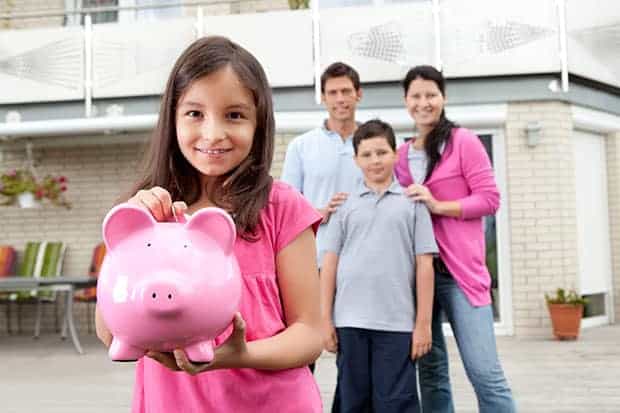 If you are a parent of a teenager like I now am, you know that the expenses just increase as your child ages.

My oldest’s endless appetite has caused quite an increase in our budget, and his extracurricular activities are now more expensive and more specific, meaning that there are less ways to save.  Since he always seems to be in the middle of a growth spurt, he seems to outgrow his clothes every six months.

Once your teens hit 16 and on, you’ll be faced with expenses like increased car insurance, an additional car for the teen driver to use and eventually, college costs.

Kids are expensive, no matter how frugal you try to be.

The Cost Of Losing Income

However, I think people often forget the flip side of the equation.  Kids will also cost you money in lost income.

When my husband and I had our third child, we decided that I should stay home because after the cost of daycare in an urban area, I would only be bringing home approximately $500 a month.  I haven’t worked full time for seven years now.

At the time I quit my job, I was making approximately $65,000 a year.  I have lost seven years of that income (though four of those seven years I would have been paying exorbitant day care costs, so the loss is not quite as great as it seems).  However, I certainly would have gotten raises each year, so I’ve lost more than $65,000 a year, too.

When I re-enter the work force, I will likely never be able to earn as much per year as I would have if we hadn’t decided I should stay home with the kids.

Of course, not every couple makes the same decision.  Some couples decide that both parents should continue to work.  While they’re able to retain the same income they had before they had children, they do suffer lost wages thanks to days off school or their child’s illnesses.

Save, Save, Save Before Children

So does this mean I’m urging people to have fewer or no kids?  No.  My husband and I are glad that we had our three children, and we’d make the same choice if we had to do it over again.

However, I would have changed what we did before we had kids.  I would have focused more on saving, saving, saving during those three and a half years of our marriage that we were childless.  I knew kids would cost a lot, but I didn’t realize I’d be spending money on kids and losing money to care for them.

An effort to create a significant savings (like the wise couples who save all of one spouse’s income before they have children) might have lessened the financial burden.

Did you save intensely before you had children, or do you find yourself, like my husband and me, facing sticker shock?

Share22
Pin1
Tweet
Share1
24 Shares
Last Edited: 2nd August 2017 The content of biblemoneymatters.com is for general information purposes only and does not constitute professional advice. Visitors to biblemoneymatters.com should not act upon the content or information without first seeking appropriate professional advice. In accordance with the latest FTC guidelines, we declare that we have a financial relationship with every company mentioned on this site.