Share1
Pin
Tweet
Share
1 Shares
The last couple of weeks we have seen a lot of news about our struggling economy, bailouts of troubled financial companies and buyouts of their their troubled assets.  This news is important, and it’s obvious we need to be talking about it.

One thing that has been lost in all of this coverage, however, is the fact that the possibility of a second stimulus check has effectively been rendered impossible because of the $700 billion bailout. 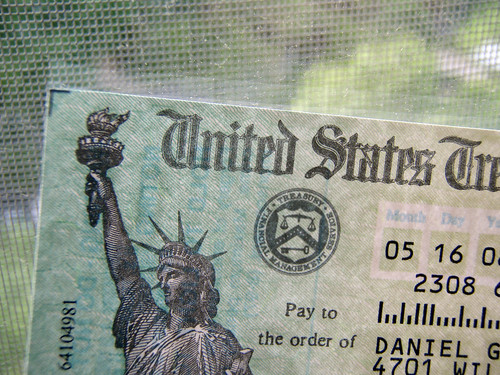 Lost in all the coverage of the $700 Billion Bailout Package was news that Congress last last week shelved a bill that would have started the wheels turning on a 2nd Economic Stimulus Check this fall.

The biggest reason is that with Congress grappling with how to fund a $700 Billion financial rescue plan, no one had the time or stomach to find funding for another $50 Billion in Rebate Checks for Taxpayers.

It’s conceivable the plan could be resurrected before the end of the year, but the Bush Administration has expressed no support for a 2nd Stimulus at any point, and Democratic support appears to be waning due to the incredible cost of the financial bailout.

Doesn’t that Stink?  Wall Street fails, so our hopes for another rebate check to help pay for gas and groceries goes out the window.

The bill that was blocked by Senate Republicans last week would have pushed $56 billion in government funds into the economy through infrastructure improvements, extended unemployment benefits and money for states struggling with their Medicaid bills.  Some have suggested that this bill was a first step towards a possible second stimulus check which could have been proposed next year if Obama was elected. Republicans questioned the actual benefit of the new stimulus package:

Spending billions of taxpayer dollars on programs and projects that will do little, if anything, to stimulate the economy is simply not the way to dig out of our economic troubles,” said California Rep. Jerry Lewis, top Republican on the Appropriations Committee.

So don’t get your hopes up on getting a second stimulus check. In my opinion it’s a better to not depend on government to give you money, and instead look for ways to create your own increased income. Check out a few of my articles that can help you do just that:

Share1
Pin
Tweet
Share
1 Shares
Last Edited: 16th April 2020 The content of biblemoneymatters.com is for general information purposes only and does not constitute professional advice. Visitors to biblemoneymatters.com should not act upon the content or information without first seeking appropriate professional advice. In accordance with the latest FTC guidelines, we declare that we have a financial relationship with every company mentioned on this site.

Previous Post: Senate OKs $700B bailout
Next Post: Our Cruise Was the Trip of a Lifetime! (Photos Included!) Part 3