My daughters and I are in the car a lot each day, so we pass the time listening to audio stories.

Recently, we listened to Jefferson’s Sons by Kimberly Brubaker Bradley.  The story is a fictionalized account of life at Monticello, especially as it pertains to Jefferson’s alleged illegitimate children with his slave, Sally Hemings.

While the story was interesting from an historic point of view, what interested me from a financial point of view was that Jefferson died with $107,000 worth of debt, which is equivalent to nearly $2 million today.

Jefferson was a spendthrift for sure—dressing his grandchildren in fine silk clothes, often upgrading and expanding Monticello, buying expensive musical instruments.  He also inherited debt from his father-in-law that took him years to dig out from under. 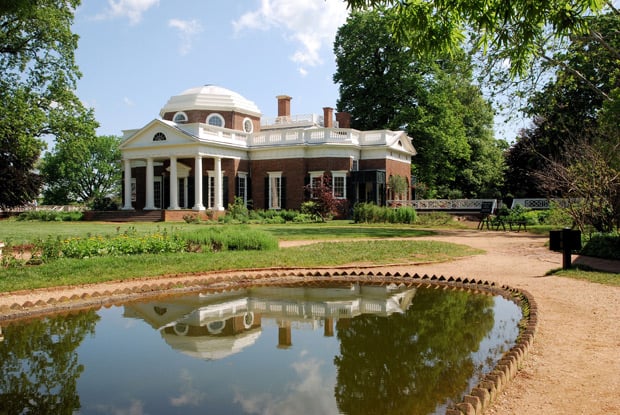 However, another cause of Jefferson’s financial straits was simply his hospitality.

Hospitality Without A Budget

When he was in the White House, he had to pay for the food and wine for the guests he entertained, and he had a penchant for fine French cuisine and wine, which didn’t come cheaply.  He imported wine from Europe and spent thousands of dollars on it each year.

When he left office and returned to Monticello, every day, people would come to Monticello to see the former president.  These were strangers, but Jefferson welcomed them into his home and insisted that they stay for dinner and spend the night.

Day after day this happened, and in Jefferson’s Sons, one of the slaves thinks how these visitors ate as much of Jefferson’s fine food as they could get, stuffing themselves on the rare treats and wine that they couldn’t afford to buy for themselves.

Can you imagine how much it would cost to feed an extra 20 to 50 people every night for dinner and for breakfast, before they head off the next day?

Likewise, Jefferson also felt obligated to co-sign a loan for a friend in 1818 for the huge sum of $20,000.  (Just for reference, when Jefferson was president, he earned $25,000 a year.)  That friend died two years later, and Jefferson was on the hook for the rest of the loan.

The Lesson We Can Learn from Jefferson

Certainly, being hospitable is a value that is mentioned in scripture and is encouraged.  Yet, Jefferson took the desire to be hospitable too far.

While it’s good to entertain guests and the occasional person looking for shelter, hosting anyone who appeared at his doorstep, whether that be one person or 50, each day for years and years was simply allowing himself to be taken advantage of.

In the end, in part because of his hospitality and fine taste, Jefferson died deeply in debt.  His grandson who inherited his property spent nearly the rest of his life paying off Jefferson’s debt.  Is being overly hospitable worth the cost to your own family?

Are You Hospitable Without A Budget?

But it’s not just Jefferson who suffered from this.  Many people even now are too hospitable at the expense of their own finances.

I had a friend in my 20s who insisted on paying for me whenever we did anything together.  If we went out to eat (and she always wanted to go out to eat), she paid.  If we went to the movies, she paid.  I tried to pay, but she would get angry and insist that she pay.

I later learned that she and her husband were living in her mother-in-law’s basement because they couldn’t afford rent.   Not surprisingly, they were deep in debt.

Finally, I stopped doing things with her because I didn’t want her to pay, and she got angry if I wouldn’t let her pay.  We lost touch, so I don’t know what ultimately happened to her family, but I’ll never forget how uncomfortable I felt about her misguided sense of hospitality, just like Jefferson’s.

Certainly Jefferson’s immense debt wasn’t caused just by his hospitality and fine tastes, but he could have made the burden he left his family smaller if he had limited what he did for others at the expense of his own children and grandchildren.

Do you know someone who is overly hospitable at the financial detriment of his or her own family?

Share
Pin2
Tweet
Share
2 Shares
Last Edited: 22nd December 2018 The content of biblemoneymatters.com is for general information purposes only and does not constitute professional advice. Visitors to biblemoneymatters.com should not act upon the content or information without first seeking appropriate professional advice. In accordance with the latest FTC guidelines, we declare that we have a financial relationship with every company mentioned on this site.

Previous Post: How To Show Hospitality On A Budget: Entertaining When Money Is Tight
Next Post: Merry Christmas: For To Us A Child Is Born, To Us A Son Is Given,