I get a lot of searches on this site from people looking for information about debt consolidation. Why do people want to consolidate their credit card debts, student loans, and medical debt all into one payment? Because oftentimes they think it is a magic wand of sorts – that it will cause all their debt problems to disappear. Unfortunately that’s not the case, and in many instances people end up making their situations worse by signing up for a debt consolidation loan. 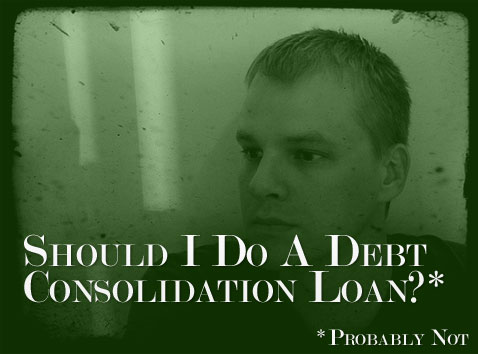 What Is Debt Consolidation

Debt consolidation is when you take several debts, and consolidate them into one loan in order to take advantage of lower interest rates, lower payments or the lure of having a simplified situation and one easy payment instead of several payments. Doing a debt consolidation loan should mean that you’re moving into a better situation that is more manageable for you and your family.   Unfortunately this often isn’t the case.

Things To Remember About Debt Consolidation

When doing a debt consolidation loan there are a few important things that you need to consider.  If you don’t examine these things it may mean that you’ll make your situation worse – rather than better.

So as you can see there are a lot of reasons that doing a debt consolidation may not be in your best interest.  Carefully consider these points before heading down this road – and make sure that you’re actually addressing the underlying issues that have gotten you into the situation in the first place.

When Should I Do A Debt Consolidation?

Are there times when doing a debt consolidation is actually a good idea?  Sure.  You  just need to make sure that you consider the points mentioned above, get yourself on a written game plan, and make sure that the debt consolidation loan is actually improving your situation instead of making it worse.    That means you aren’t lumping low and high interest loans together in a rate somewhere in the middle, you’re not extending the debt out into the future, and you’re not consolidating your debt without first getting yourself on a budget.

When can a debt consolidation loan be a good thing?  Take the situation of my good friend Matt over at DebtFreeAdventure.com.  He recently did a debt consolidation loan through Lending Club.  He took several higher interest debts, anywhere from 10.5% to 19.5% interest, and consolidated them all into a lower 9.32% loan.    He didn’t extend the length of the loan, and he has gotten his family on a written gameplan to get out of debt.  They’ve made a commitment to making more money, getting gazelle intense, and getting out of debt as fast as he can.  His consolidation has improved his situation, and in the end should be a good thing.   Unfortunately not many people are as conscientious as Matt, and just get themselves into more trouble after getting their consolidation loan.

To find out if a debt consolidation loan can improve your situation, check out a calculator like this one found on MSN Money Central: Debt Consolidation Calculator

So What Other Options Do I Have?

There are a host of other options out there when it comes to getting rid of debt.  Personally my preferred debt elimination method is the debt snowball through Dave Ramsey’s total money makeover program.  You can read about Ramsey’s 7 Baby Steps to debt freedom on this site, as well as his Financial Peace University class that we took.  If you don’t care to read the whole series of posts, here’s a quick look at how the debt snowball works.

While paying off debts many people will choose to take on part time jobs temporarily to create new income – so that they can get out of debt that much faster.   When they are disciplined and create a written game plan most people are able to get rid of their debt within 12-24 months. You can too!

What do you think about debt consolidation?  Is it something you would consider doing?  If you have done a consolidation, did it improve your situation? Were you able to get rid of your obligations and become debt free?  What steps have you taken to improve your spending and saving habits? Let us know your thoughts in the comments.

Share
Pin17
Tweet
Share
17 Shares
Last Edited: 23rd June 2016 The content of biblemoneymatters.com is for general information purposes only and does not constitute professional advice. Visitors to biblemoneymatters.com should not act upon the content or information without first seeking appropriate professional advice. In accordance with the latest FTC guidelines, we declare that we have a financial relationship with every company mentioned on this site.

Previous Post: Don’t Let Summer Fun Distract You From Your Goals
Next Post: What Is The Average Retirement Savings By Age? Are You Falling Behind?