I was listening to NPR a few months ago, and there was a story on about a family with four children.

The parents were absolutely devoted to their children.

Their afternoons were a busy shuffle of running kids to extracurricular activities.  They didn’t have any retirement savings outside their employer-based retirement because all of their cash went to the children to pay for sports and sports equipment as well as tutoring and music lessons.

They had one single minded goal–get each of their children into college on a scholarship.  To reach this goal, they were willing to sacrifice years and years of their own time and money. 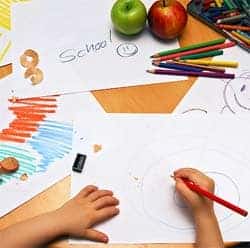 Wasn’t that a better plan than grooming the children for years, at the expense of family money and time, in the hopes of getting a scholarship?

In all fairness, their oldest child was away at college, and she did indeed get a sports scholarship.  Still, will the younger three be able to do the same?

How Much Do You Invest In Your Children’s Activities?

Parents decide each year how many activities to involve their children in and how much to pay.  I have a family friend whose daughter played on a traveling soccer team.  The family had to give up every single weekend for the soccer games, and they paid thousands and thousands of dollars for the experience.  (The daughter was on the team for several years.)  Now, she’s 19, posting pictures of herself at parties on Facebook and attending the local community college.  From an outsider’s perspective, the time and money investment does not look worthwhile, but the family would likely say differently.

My husband and I take a much more modest approach.  Our kids are 9, 5 and 3, and we have the 9 year old involved in one free activity (choir) and two paid activities–soccer and music classes.  Honestly, our son, the 9 year old, needs his down time.  If he’s too overscheduled, he becomes grouchy.  I can’t imagine how the kids (or the parents) in the NPR piece handle the constant flow of activities.

Of course, I myself was never heavily involved in extracurricular activities, so maybe that is why I like to leave ample downtime in our schedule.  Plus, good or bad, I’m not the kind of parent who will devote my whole life to my kids.  I love them, but I’m not willing to give up ALL of my money and time like the family in the NPR piece.

How Realistic Is This Plan?

The NPR program mentioned that this family is just one of millions of American families who are overscheduling their kids and spending huge amounts of money hoping to land their children a scholarship.

Let’s be honest.  For most of these kids, this plan is not going to work.  There are only a limited number of scholarships, and as more and more kids try to compete for them, fewer will actually get them.

The plan to dump all of your resources into your children in hopes of getting a scholarship is not practical.  Yet each year, millions of parents do it.

What is your take?  How much time and money should parents spend on their kids in hopes of securing a scholarship?

Share12
Pin6
Tweet18
Share1
37 Shares
Last Edited: 28th June 2019 The content of biblemoneymatters.com is for general information purposes only and does not constitute professional advice. Visitors to biblemoneymatters.com should not act upon the content or information without first seeking appropriate professional advice. In accordance with the latest FTC guidelines, we declare that we have a financial relationship with every company mentioned on this site.