Getting from point A to point B.  If you live in an area without a lot of public transportation, or spread out over a wide area like the Minneapolis area is, you’re probably going to need transportation of some sort.

We use cars for commuting to our jobs, driving to the grocery store, going to the doctor or visiting family. Having a reliable car can be pretty important just for living every day life.

Buying a car is also one of the biggest purchases you’ll probably make besides your house, and as such it’s important to consider the financial ramifications of this important decision.

So when it comes time to buy a car, the question is, how big should your car down payment be?  How much of a car can you afford? 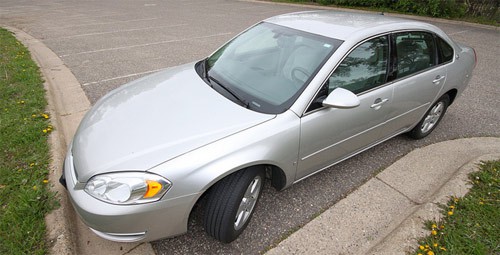 At our house, we’re at a point financially where the only down payment we’ll consider on a car is a 100% down payment.  While that may sound a bit crazy, it’s actually not as hard as you might think.

We follow a plan similar to “Drive Free Cars and Retire Rich” plan offered by Dave Ramsey where you first buy an older car worth $1,000-2,000 in cash.  Instead of paying a car payment, you then save up what would have been your car payment, and within a year or so, you’ll have enough money in the savings account along with your trade-in in order to afford a significant upgrade in car.  Do that once more and after a couple of years you’ll be able to afford a nearly new car with what you’ve saved. At some point the car you’re driving is going to last longer than you’ll need to save up the replacement cost for a new car, and you’ll be able to start putting that money away for retirement or other savings goals instead.

So let’s say instead of buying a new car with that $495.29 payment, you banked it for 12 months while driving that old beater.   At that point you’d have $5943.48 saved up, along with a car that is still probably worth about $1,000-1,500 (since used cars don’t depreciate as fast).  You use that money to buy a car worth somewhere in the range of $7,000-8,000, and then repeat the process.  This time, however,  you can save up for longer since the car is in better shape and should last longer without major repairs.  After repeating this process a couple of times you’ll already have the balance saved up for your next car, without needing to replace the current one. At that point you can start taking that extra money and putting it directly into savings, retirement or some other savings or giving goal.

So putting down as much as you can on the car is a good bet.

What’s The Minimum I Should Put Down?

So let’s say that you don’t have a lot of extra to put down on a car, what’s the minimum that experts suggest that you put down?

Reading a bunch of sites I’ve found that the minimum to put down varies from new to used cars.


The average down payment last year on new car purchases was 11 percent of the purchase price, or an average of $3,263 per vehicle.   That is less than most experts would recommend, and many think it’s because of the low interest rates and low down payments required these days.  People think they can get better returns on their money elsewhere.

Based on the fact that the average new car will depreciate between 20-25% in that first year, most experts suggest that you put down at least 20% on a new car when you purchase it.  That way you’re covering that first year’s depreciation and won’t end up underwater if you decide to trade the car in one year later, lose a job or if you end up in an accident.  If you don’t put anything down you could end up in a situation where you have to pay several thousand dollars out of pocket to settle  your loan – if the worst case happens.


Used cars depreciate at a much lower rate than a new car, with an average depreciation of around 10% per  year.  Because of that a lower minimum down payments is suggested by experts.  Edmunds.com suggests a down payment of at least 10% for used car purchases to cover the depreciation.

What Other Things Do I Need To Consider?

When considering how much of a down payment to to pay, there are some other things to think about.

What We Did At Our House

At our house, as mentioned, we follow a plan where we put 100% of the purchase price down – we pay cash. So for my wife’s car that we purchased last year, here’s the progression we followed to get where we are today.

So each time we’ve bought her a new car we’ve upgraded a bit, buying a more expensive lower mileage car, but paying cash because we saved a car payment automatically ever month into our goal based savings account with Capital One 360. We also did our research and bought cars that held their value well so we were able to re-sell them at a decent price with minimal depreciation.

We are still saving our car payment every month in anticipation of my next car, and at this point we’ve already got almost enough saved. After that is saved we’ll start adding that monthly payment to the retirement accounts.

What are your thoughts on how much to save for a car down payment?   Do you prefer to pay a big down payment or to pay cash, or a smaller one and put your money elsewhere in hopes that it will grow? Tell us your thoughts.

Share9
Pin2
Tweet37
Share11
59 Shares
Last Edited: 17th June 2014 The content of biblemoneymatters.com is for general information purposes only and does not constitute professional advice. Visitors to biblemoneymatters.com should not act upon the content or information without first seeking appropriate professional advice. In accordance with the latest FTC guidelines, we declare that we have a financial relationship with every company mentioned on this site.

Previous Post: Being “Normal” Costs An Average of $600,000 Over a Lifetime: Here’s Why We Are Fighting Back
Next Post: 10 Tips For Saving Money While You Travel