Last week I briefly touched on a new e-book package  that just came out that was written by Adam Baker, the mind behind the entertaining blog, ManVsDebt.com.  The e-book talks about a topic that I know pretty well, selling your stuff to make a bit of extra cash.

A couple of years ago my wife and I moved from a townhouse we had lived in for about 5 years, and in the process had to get rid of a ton of clutter.    While we didn’t really think we had that much stuff lying around, only after we had started trying to clear things out did we realize just how much stuff had collected in our spare rooms.  We had old electronics, childhood toys, collectibles, old books, baseball cards and a variety of other furniture, clothing and other un-necessary things.

In the end, we were able to get rid of most of the stuff we didn’t need, and we moved into our new house with a fresh start.  Problem is, the clutter is starting to creep back.

We could have used Adam’s e-book, Sell Your Crap, back then, and now that I’m reading it – I know it will be useful in helping us to avoid creating new clutter in the future.

Who Is Adam Baker?

Before we jump into this too far, I suppose we should address just who Adam is, and why he has some expertise in this area of de-cluttering and selling your things.

A couple of years ago Adam and his wife Courtney reached a point where they had decided to live a dream that they shared, and decided to move overseas long term.  They aimed to experience new things, meet new people and explore new places.  It was an exciting prospect to be sure, but before they left they had to simplify, get away from a consumerist mindset, and sell basically everything they owned.  They did just that, selling everything except for a few essentials, and then together with their toddler, they moved halfway across the world to New Zealand, along with other destinations.   By the time they left they had paid off all their debt and basically sold everything they owned.  So he knows what it is to “sell your crap”.

While Adam’s story is certainly an extreme example, you don’t have to be moving across the world or selling everything you own to get a lot out of his e-book.  In fact most of us could benefit from the no-nonsense examination of the rampant consumerism we all engage in, the emotional impact of “stuff” and making a few bucks off of the stuff that is cluttering up our lives.

So with that said, let’s talk to Adam about his new book. 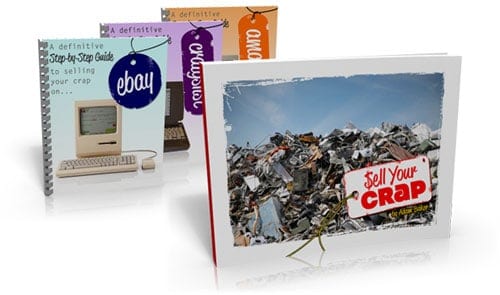 1.  How did you come up with the idea for your new e-book – Sell Your Crap?  Did your own experience selling all your worldly possessions to move overseas make you realize just how involved clearing the clutter was – and crystalize for you that there was a need for something like this?

Well, the process for us wasn’t all that clearly laid out.  We had an epiphany, to give you the short version, and decided that we want to sell everything we owned, pay off our debt, and travel abroad.  We knew that much.  How we were going to do it was another monster.  We starter slowly, not having a great reference point or guide and stumbled our way through it.  We made mistakes and cost ourselves some time and money… but in the end we did it.  We got everything down to two backpacks and set off to travel.

After that, the only thing we really noticed was how much lighter and more free we felt.  We felt like a burden had been lifted of us.  But even still, I didn’t realize there was a need for a guide of this nature and scope.

That came later after we began sharing our experiences and story with other people.  Time and time again, we were asked the same type of questions.  How’d we do it?  Where did we sell everything?  How’d we part ways with our sentimental stuff?  Didn’t we need more stuff than that?  Dozens of the same questions and issue were brought up.  Finally, I realized that just sharing our story wasn’t enough. Through trial and error we had learned all the ins and outs of both the mental and the tactical approach to purging the excess stuff in our lives.  So I finally committed it down into a guide:  Sell Your Crap.  :-)

2.  We’ve all seen the shows on cable TV like “Hoarders” that explore the depths to which so many have sunk when it comes to hoarding “things”.    While mosts people probably haven’t gotten to that level, do you think it’s a real danger that people should be aware of – allowing things to take over our lives?

You are exactly right.  Very few of us are at the level of some of the extreme cases that make interesting television, however looking around it’s not hard to see that even our average lives have gotten out of control.

I think the biggest danger for people is that our clutter is a sneaky, silent enemy.  Slowly, but surely we accumulate more and more stuff.  It slowly drains our time, energy, and money… often times in small amounts that we don’t immediately notice.  It can weigh us down and restrict how easily we can respond to life’s ups and downs.  We don’t just wake up with thousands of dollars of crap we no longer use piled and stored in various locations.  If that happened, most of us would reject it!  Instead it’s a slow, convenient process… subconscious even.  We don’t really realize how bad the problem is!

The cool thing is as we start to purge this stuff we immediately start to feel the benefits!  Whoo-hoo!  :-)
3. When my wife and I moved a few years ago, we sold and donated a ton of stuff. In the end we made a few hundred dollars from random things we just had laying around or sitting in storage.  How much do you think the average family could make just by selling unused and unwanted things they have lying around their homes?

That’s a tough question, because there are so many life situations and degrees of clutter.  Also, each different family or person will have different items that are just normal stuff and others than are excessive “crap”.  :-)

Courtney and I sold somewhere between $1000-$1500 when we did our big purge and – in reality – we didn’t have a lot of nicer things.  My guess is the typical suburban family has thousands and thousands of dollars worth of stuff that no longer brings them any joy, value, or purpose any more

Yeah, I hear ya.  One of the most common areas people struggle with is sentimental items (of all sorts).  The key to letting go of some of these items is to realize that there is no inherent emotional value in those items.  What I mean by that is when they are first created, shipped, and sold… they have no emotional value.  None.  Not until we touch them, use them, or go through experiences with them, do we place the emotional value in them.

This is a small, but important concept to realize.  Because once we know that we are the ones that put those emotional attachments into an item… we can also realize that we can choose to remove them, as well.  Sometimes you can just ditch the item altogether, realizing that the emotional value or the memory is separate from the item itself.  Other times it helps to preserve the memory in another way.  I’ve heard of people re-purposing old tshirts into quilts (in your example).  Courtney and I also love the tactic of taking and saving digital pictures of the item.  This makes it easier to get rid of the tangible items, while still helping keep around the memory or emotional value.  :-)
5.  Who is this e-book written for, and what is the value proposition?  If someone were to purchase this e-book package, can you guarantee they will they get their money’s worth – and not just more “digital clutter”?

The package of guides is really for anyone looking to get into action and make some cash off their excess clutter.  For some people, that’s as simple as finally cleaning out a closet they’ve been putting off for years!  Others may want to purge most of what they own and travel or move across the country.  The point of purging your excess is to free up more of your resources – time, energy, money – so that you can allocate them into your passions (whatever those are for you and your family).

For beginners, it starts really simple.  Screen by screen pictures of how to set-up and optimize your accounts on eBay, craigslist, and Amazon.  What to sell where and how to create the listings.  For advanced users (or people who’ve already sold a couple items on eBay), it contains advanced tips and tactics to make sure you maximize the amount of cash you can put into your pocket – and save hours of time in the process.  I spent a lot of energy focusing on how to batch tasks and save time, so that many people could fit time into their busy schedules.

I’m so proud of these guides that I created the $100 Effectiveness Guarantee.  Simply put, if they don’t get you into action and cause you to turn a portion of your useless junk into at least $100 cash… just ask for a refund.  No questions, no hoops. I’ve poured myself into these products and know they will give you the confidence to attack and sell your clutter.

Adam’s e-book is available in two great versions.  Please visit his site for details of each package:

Share
Pin
Tweet
Share
0 Shares
Last Edited: 28th September 2010 The content of biblemoneymatters.com is for general information purposes only and does not constitute professional advice. Visitors to biblemoneymatters.com should not act upon the content or information without first seeking appropriate professional advice. In accordance with the latest FTC guidelines, we declare that we have a financial relationship with every company mentioned on this site.

Previous Post: Cash Back Rewards Can Help You Save On Everyday Expenses. Tell Us How You Would Use Your Cash Back – And Win A Starbucks Gift Card.
Next Post: Ways To Make Extra Income: How To Create And Sell An Ebook On Your WordPress Site