If there’s one thing we’ve learned in the past few years since the market crashed in 2008, it’s that there’s no such thing as a sure thing when it comes to a job.

While things have improved from where they were back then, and fewer people are being laid off these days, hiring has not been picking up to pre-downturn levels.

In the New York Times, they explain:

The credit crisis led not only to a rapid gain in the number of workers being let go, but also to a sharp reduction in the number of people choosing to leave jobs. For the first time since the government began the survey in 2000, more people were leaving jobs involuntarily than voluntarily. That is no longer the case, but the labor market has become more constricted after the crisis. Fewer people are being let go, but the number of people leaving jobs of their own accord has been rising very slowly, and remains below prerecession levels

In other words, during the recession there was a rapid gain in the number of people being let go from their jobs, and people who had jobs did their best to keep them – with more people leaving their jobs involuntarily than voluntarily.  Now as time goes on and things improve more people are leaving their jobs for greener pastures, but it’s still not to levels where it was before the recession.  Not only that but fewer companies are hiring.

All of this to say that the job market is a bit uncertain these days, even if you have a degree and some level of experience. Companies aren’t hiring at the same pace as they were a few years ago, so it’s important to make plans beyond just your day job to stay ahead.

For my family that means having a backup plan in case I were to be let go. We need to be able to make it on other sources of income if we were to go through a extended period of unemployment.  Thankfully over the past few years I’ve been building a successful series of side incomes that I can rely on in tough times. 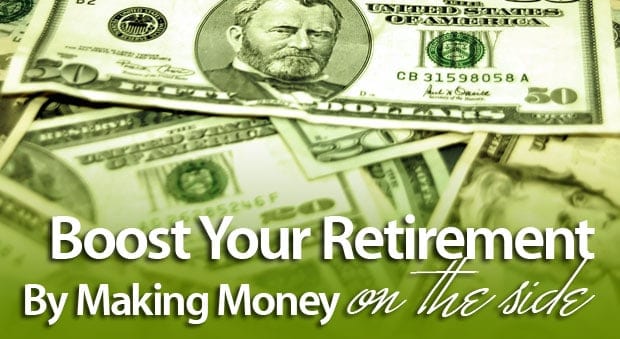 Making Income On The Side

Since I’ve had regular full time jobs I’ve always looked for ways that I could add some extra income to my bottom line. Not all of them have had very long lives.

Selling on eBay: Back when eBay was first becoming big in the early 2000s, I got in on the craze and started buying things on clearance at local stores, and then re-selling them at retail or above on eBay.  This was fine for a while, but I had trouble finding enough things to sell.

eBay listing agent: From there I created my own side business helping people to list their items on eBay for them, taking a listing fee and commission of the profits.  Shortly thereafter a couple of bigger companies with physical locations started doing the same thing and my business dried up.

Service provider: From there I decided to try and make money not on eBay itself, but from other people like me who were selling on eBay. I sold my help and services to eBay sellers to help them get a nice branded presence up on eBay, charging them small fees to do that.  I would design a graphic for their logo, set them up with HTML templates for their listings and get them going with an eBay store.  I enjoyed doing that, but it tended to be pretty work intensive and as time went on people became more savvy and more tools became available to people to make it easier without help.

Online e-commerce: After eBay service provider I tried setting up an online store with a friend. We bought wholesale goods through a third party, and then sold them through our new website online. That venture never really took off, mainly because I don’t think we really treated it as a business, and we had no idea what we were doing.

Through it all I’ve found that some of the ideas I’ve had to make money have worked, and others haven’t. But the one thing that I’ve found is that if you are always diversifying where your extra income is coming from, you’ll always have something in  your back pocket that’s making you at least a little extra money.

Today I’ve been blessed enough to have been able to create several decent streams of side income that mean my wife can stay home with our son, and we can still live a decent lifestyle while saving money for retirement.

Among my current side income sources:

Using Side Income Sources To Create A Backup Plan

When I started my blog one of the goals I went in with was trying to create a bit of a cushion for my family where if I lost my job – or my wife lost hers, we would have some other income to fall back on.

While I haven’t needed that backup plan yet, having the side incomes have allowed us to save up a nice emergency fund, and last year  – help with a home down payment.

Now that we’re in our new house, we’re re-building that emergency fund before we start kicking our retirement accounts into high gear.

One of the biggest things that having the side incomes has allowed me to do is to boost our retirement account contributions.

Now that things are calming down from buying a new home and paying way too much for furnishings and decorations for the new house, we’ll be getting back into saving in my Roth IRA and 401(k).

With my day job income alone we would likely still be able to save – but not nearly as much.

They key to this is to make sure that the secondary income sources that you’re creating – are actually being put to good use and not just spent on toys, vacations and other miscellaneous expenses. To that end, make sure that you make a plan, and make certain things automatic like your investments.

For us that means making automatic withdrawals from our checking to go into an automatic investment plan with Betterment, as well as making pre-tax investments into my 401k.

Have you tried making side income while keeping your day job? Tell us your stories of successful and failed side ventures in the comments – and don’t forget to tell us how you’re using the extra income!

Share41
Pin92
Tweet33
Share9
175 Shares
Last Edited: 14th March 2014 The content of biblemoneymatters.com is for general information purposes only and does not constitute professional advice. Visitors to biblemoneymatters.com should not act upon the content or information without first seeking appropriate professional advice. In accordance with the latest FTC guidelines, we declare that we have a financial relationship with every company mentioned on this site.

Previous Post: What Is A Responsible Number Of Children To Have?
Next Post: How To Save Money Each Month: Refinance Your Mortgage Through HARP