With the unemployment rate hovering between 7.8-10% for the past few years, and actual unemployment figures probably being much higher than that, a lot of people are hurting financially these days.

We all probably know a family that is struggling these days with a long term unemployed father and mother, unemployment assistance running out and credit card bills starting to pile up.

With all of the economic problems more and more people are having to take measures that they’d prefer not to, including taking money from their retirement accounts. Instead of preparing for their future they’re having to pay for today.

A Quarter Of Americans Dipping Into Their 401k 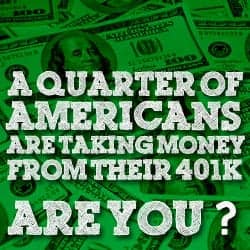 More than 25 percent of Americans are dipping into 401(k) retirement accounts to pay bills, according to a recent report.

U.S. workers are tapping into nearly a quarter of the $293 billion placed into their retirement savings each year to pay for mortgages, credit cards and other debts, according to a report from financial advisory firm HelloWallet. Those in their 40s are the most frequent raiders, with about one-third using their 401(k)s to pay current bills.

Other studies have shown similar results.

Other studies bear out those results. Vanguard, an investment-management group, said American workers withdrawing money from 401(k)s or taking out loans against their accounts jumped 12 percent since 2008.

A Shaky Foundation For Future Retirees

With so many people draining their retirement accounts and negating any future gains, a lot of people are going to have issues not just now, but down the road.

Draining funds that ensure security when workers retire has raised new worries about the shaky foundation for older Americans.

Many workers use loans that incur large penalties to dip into retirement accounts. In addition to paying income taxes, many are hit with a 10 percent tax penalty.

Matt Fellowes, chief executive of HelloWallet, said there are few winners in that situation.

“What you have is 401(k) participants voting with their wallets, saying they would much rather use their money for other purposes,” Fellowes told the Washington Post. “I don’t think this can be ignored. Employers are dramatically overpaying for retirement, but it is not benefiting the employee.”

Not only are people going to have to worry about paying penalties now for withdrawing money early, they’ll also have to pay taxes on the money.  Any gains in their investments that they may have seen will also be short circuited as the power of compounding interest is cut off at the knees.

What Are You Doing To Ensure Your Retirement Account Is Safe?

Millions of people are in the midst of draining their retirement accounts and watching their savings dwindle away.  So what can you do to do your best to avoid seeing the same happen to you?

Not everyone can completely avoid this situation as job losses and tough job markets are a reality these days.  The best you can do is to try and plan ahead for a rainy day so that when the worst happens, you’ll be ready for it. What are some things you can do?

These things are just a start. The key is to get your finances in order, to start saving up a large emergency fund, and plan for as many contingencies as you can.

Your turn: Have your own ways that you’re planning ahead so that you don’t have to withdraw from your 401(k) before the time comes? Tell us here!

Share22
Pin7
Tweet
Share3
32 Shares
Last Edited: 18th March 2013 The content of biblemoneymatters.com is for general information purposes only and does not constitute professional advice. Visitors to biblemoneymatters.com should not act upon the content or information without first seeking appropriate professional advice. In accordance with the latest FTC guidelines, we declare that we have a financial relationship with every company mentioned on this site.

Previous Post: What Is A Custodial Savings Account And What Are The Pros And Cons?
Next Post: 4 Board Games That Can Help Teach Lessons About Personal Finance