Over the past few years through writing for this blog and helping to facilitate Dave Ramsey‘s Financial Peace University class I’ve heard a lot of misconceptions that people have about money. These are beliefs and ideas about money that people hold deep in their psyche that tell them how they should approach money. They help to create a framework for their view of their finances and how they approach them. The problem is, when they create their framework based on a set of misconceptions, exaggerations and lies, they’re bound to fail. They’re hamstringing themselves and setting themselves up for profound disappointment. 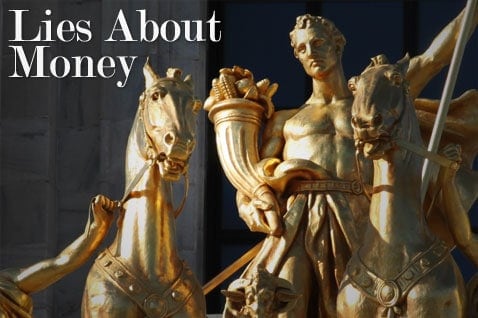 Here are a few of the more common lies and misconceptions about money that I’ve encountered in the last few years. You may have heard or even believed some of these in your own life, I know I certainly have.

1. Money buys happiness:  One thing that people often assume is that if they were able to increase their income substantially, or if they were to win the lottery, that they would be able to find happiness, and peace.  Studies tell us, however, that once you’ve gotten beyond a certain level of poverty and well being, having more money doesn’t contribute to increased happiness.

People with above-average income are relatively satisfied with their lives but are barely happier than others in moment-to-moment experience, tend to be more tense and do not spend more time in particularly enjoyable activities.” June 2006 Princeton study

Having more money as the ultimate goal won’t lead to happiness, but often will lead to the opposite.  True happiness can only be found through faith, family and close relationships with others.
2. To truly get ahead you have to use debt as leverage:  There is a common misconception that you have to use debt to get ahead in this world. You have to get student loans to get an education. You have to get a car loan in order to afford a car.  You can’t start a business unless you go into debt for a small business loan.

While I’ll never be one to say you should NEVER get a loan, I will say that it is a lie to say that you need to have debt in order to get ahead.   Some of the most successful people in business and in life are those that pay cash for the things they buy, or operate their business on a cash basis.    If at all possible, I’ll operate on a cash basis as well.

Quite to the contrary Thomas J. Stanley in his book the “The Millionaire Next Door“, found that high net worth individuals almost always say that one of the biggest reasons that they were successful was because of the high value they place on integrity.    In a way it makes sense because who wants to do business with someone that is unethical or who will cheat them?  Those who are unethical are usually found out and don’t succeed in the long run.

Dishonest money dwindles away, but he who gathers money little by little makes it grow. Proverbs 13:11

4. You don’t need a plan for your money: Some people think that they really don’t need to plan ahead because they make enough money not to worry about it, or because they just have a feeling that “things will work out.  As the saying goes, “If you fail to plan, plan to fail”.

We’ve always done decent as far as income goes, but we always seemed to be just barely ahead, and never had enough to save much at the end of the month. Only after we had made a budget did we start finding that we were able to save substantial amounts of money every month.

5. You don’t need to start saving and investing when you’re young:  Sometimes people feel like they don’t need to start saving or investing when they’re young because they figure they’ll find a high paying job and amass all the money they’ll ever need – quickly.  Problem is many of those same people don’t find those high paying jobs, end up with large student loans, and end up not having enough in retirement.   Plan ahead, start investing young and you’ll come out on top.   Worst case scenario?  You’ll end up getting that high paying job AND having a nice savings set aside at the same time.

6. Having expensive things means that you’re successful:  People often equate having high status items like clothing, jewelry, cars and houses as an indicator of success or wealth.  The problem is that much of the time the people that have these items are only “acting rich” or are in a high income position but are still highly leveraged.  Their net worth is still small in comparison to their incomes.  Only a small portion of the people who have high status luxury items are actually extremely rich.

For most people who are balance sheet affluent, their spending and consumption patterns are much more mundane.  For example in the book “The Millionaire Next Door”  Thomas J. Stanley found that of the millionaires that they studied, 97 percent of them were homeowners, but their average home value was only $320,000!   That’s a lot lower than most people would assume!

7.  I can’t succeed because others are holding me back :  Far too often people like to blame external forces for their own failures instead of taking responsibility for their mistakes, and learning from them. We all know someone who is like this.  They can’t make their credit card payment, so they blame the credit card company for their high rates (instead of themselves for overspending and using the card).  Or the guy who buys a house with an adjustable rate mortgage, but when it adjusts to a higher rate and can’t afford his payments, he blames the mortgage company for their shady dealings.

Taking responsibility for your actions and learning from your mistakes is very freeing.  It means you’re adaptable, you are able to pick yourself up and move on to the next step – and realize that no one can keep you down if you don’t allow them to.   Stay positive and you will succeed.

You can give in to the failure messages and be a bitter deadbeat of excuses. Or you can choose to be happy and positive and excited about life.  A. L. Williams

I’ve listed a bunch of lies about money that people are taken in by, and now I’d like to hear your take.

What lies about money have you heard? Have you ever believed those lies and did they handicap you? Tell us your thoughts in the comments!

Share8
Pin3
Tweet21
Share3
35 Shares
Last Edited: 4th August 2012 The content of biblemoneymatters.com is for general information purposes only and does not constitute professional advice. Visitors to biblemoneymatters.com should not act upon the content or information without first seeking appropriate professional advice. In accordance with the latest FTC guidelines, we declare that we have a financial relationship with every company mentioned on this site.

Previous Post: Do You Really Have To Sacrifice To Get Out Of Debt?
Next Post: Where Is All My Money Going?!?!