Most debt is toxic just as some food is toxic (I’m glaring at you Twinkies!).

Have you ever attempted to out exercise a poor diet? I have and it does not work.

In 2017, I trained for the Kentucky Derby Marathon. I exercised six days per week so I was always hungry! After returning home from running I would stuff my face! Weight should have dropped off during this time but it did not. Why? Because I was trying to out exercise a bad diet.

Debt Is Not Sin

Before we get too far down the road, let’s address the elephant in the room.

Debt is not sin.

I have not seen a verse that indicates that debt is sin. However, I also can’t locate an example where the Bible encourages people to borrow money. In fact, the practice is often discouraged. “All things are lawful but not all things are profitable or helpful” (I Corinthians 10:23). That’s where the use of debt falls.

In a perfect world none of us would be in debt to anyone. Our world is sin-cursed and far from perfect. We still should strive to eliminate as much debt as possible.

“The rich rules over the poor and the borrower is slave to the lender” (Proverbs 22:7 NIV).

There are several types of debt. No debt is ideal, but I am convinced some debt is more toxic than others. Let’s talk about six types of toxic debt. Perhaps you have others you’d like to share with us in the comment section.

Toxic Debt #1 – IRS and STATE TAXES. We are officially in what is known as the gig economy. The opportunities are endless for people to start their own businesses. Within a short period of time you could drive for Uber or Lyft, you could open an online store, shop for groceries with Shipt, walk dogs with Rover, or sell logos on Fiverr.

Be your own boss! Get a side hustle! Never before has entrepreneurship been so available to so many people. However, this also means that you are responsible for paying all of the taxes.

The IRS does not mess around when it comes to collecting taxes. Every year, thousands of people are unable to pay their taxes and in essence they receive a “loan” from the IRS. Their terms are non-negotiable. The interest rate is high and the fees and penalties are brutal. The IRS does not even consider bankruptcy a legitimate word.

I’ve worked with businesses that did not pay their taxes. The IRS came to their brick & mortar store and locked it all down. They took possession of all of the inventory and refused entry to the owner. They take this stuff seriously.

Pay your taxes on time and never get into a position where you need a loan from Uncle Sam. He is not such a nice Uncle when he is owed money.

If you borrow from your future self it doesn’t seem to be that bad of a deal. Hey, I’m just borrowing from myself. It’s not bad it is TERRIBLE! When money is removed from your 401(k) it is not working for future you. It’s not invested, so it is not growing. Maybe you can live with that. Perhaps the market has taken a dip and you’re thinking you’ve outsmarted the market. Not so fast.

According to Gallup, over 85% of employees hate their job. Ouch! When you borrow from your 401(k) you cannot quit your job (without severe penalties) unless you have the means to repay it within 60 days. I’m guessing that if you had the means then you would not have borrowed against it in the first place. What if you get downsized, right-sized, or fired? Bingo! You have 60 days to repay the loan or it is considered a distribution. As a bonus parting gift you get additional penalties and taxes. Fun stuff!

Is there ever a good time to borrow against your 401(k)? According to Dave Ramsey, the only time a 401(k) should be raided is in the event of a home foreclosure. In his opinion this should only happen when every other option has been exhausted.

Toxic Debt #3 – HELOC. A HELOC is a home equity line of credit. Banks can offer these “great rates” because they are taking a lien against your home. What do you need that is so important that you would risk losing your home? There might be a couple of things but not that many. Everyone has unique situations.Prior to the financial crisis in 2007-2008 home values soared and families saw their equity as a new source of cash. Money was pulled out of homes and quartz counter tops and high-end appliances were purchased at record paces. Then home values plummeted. Jobs were lost. It was ugly.

Before getting a HELOC make sure the reason is legitimate. Keep your home safe & secure.

Toxic Debt #4 – Credit Cards. I heard Mark Cuban say, “If you carry a credit card balance you are not serious about building wealth.” Mr. Cuban flies in rare air. He’s a billionaire and pressed the issue further by declaring that none of his friends or associates became rich by using credit cards. The average amount of credit card debt (for families that carry a balance) is $9,333 (Value Penguin). Additionally they state that around 41.2% of Americans carry some amount of credit card balance. One more depressing thought: the average interest rate on credit cards is 16.71% (USA Today).

What about points and cash back? Personally, I don’t play that game for a couple of reasons. One, psychologists have proven repeatedly that we spend more when using plastic. I don’t like to overspend. Another reason is that it takes a ton of purchases to make a decent cash back amount. If you spend $100,000 you get back around $2,000. I know many people that participate in this plan. I won’t pretend that some of the offers can appear enticing. If that is you, just tread cautiously.

One piece of advice. If you ever find yourself carrying a balance in order to stay in the “cash back/miles” game—get out immediately! Fool me once, shame on you. Fool me twice, shame on me.

Toxic Debt #5 – New Auto Loans. We Americans love our cars, trucks, and SUV’s. For many, cars are a status symbol. If I drive this type of luxury car that means I am rich! Not exactly, Skippy. Automobiles are depreciating assets. The moment a new car is removed from the lot it loses value and it continues to drop in value. New Car Fever is a legitimate virus. Once the host invades a body it’s usually game over!

The average car payment is currently $523 per month! Car payments are often the reason financial plans implode. Many families now have multiple cars so the monthly payment to the bank is  possibly higher than $523.

A better option is to buy pre-owned autos. Cars today are more reliable than in times past. The last time I purchased a brand new car was in 1992. I drove that car for 335,000 miles! I’m going to let you in on a little secret. I did not die because I haven’t bought a new car. My wife still loves me and my kids still call me dad. Jury is out on my dog, but that is post for a different day.

What about 0% financing? Most of those deals are now gone since we’re in a rising interest rate environment. If there were some available they still are not a good deal because of depreciation. According to CarFax a new car loses 10% of it’s value the moment it is driven off the lot. It will also lose another 10% in it’s first year. You aren’t paying interest but the value of this asset is plummeting. Plus you’re in debt—even if you’re not paying interest.

As a reminder, the borrower is slave to the lender—even at 0%.

Toxic Debt #6 – Student Loans. Student loans are usually our first choice rather than our last resort. The USA has a legitimate student loan crisis. Loans are easy to get. Do you know why? Student loans are bankrupt proof. That is probably the primary reason I believe that student loans are toxic. The other reason is that they are unnecessary in many situations.

There are many ways to pay for college. You’ve read and heard all of the tips, tricks, and hacks but few are following them. My journey began at a community college. I received my AA and I then transferred to a university. My employer paid for my bachelor’s and for my MBA. The only thing I had to pay was a mandatory trip to Europe during grad school. The total cost was about $3,500. There’s one way. Did you know that 90% of mid to large companies offer some type of tuition reimbursement program (WSJ)?

Make student loans the last resort. Retake the SAT and ACT. Take college level courses in high school. Try the community college route. Join the military. Fill out every scholarship you can find—make that your  job!

If you’re already in student loan debt here are some great ideas to help you get out quickly.

The least toxic debt mentioned in this post is a student loan. However, just because the poison level is minimal doesn’t mean we should drink it!

Debt is toxic. I encourage you to do everything in your power to steer clear of it. You won’t get rich by going into debt and it just might sabotage your financial future. 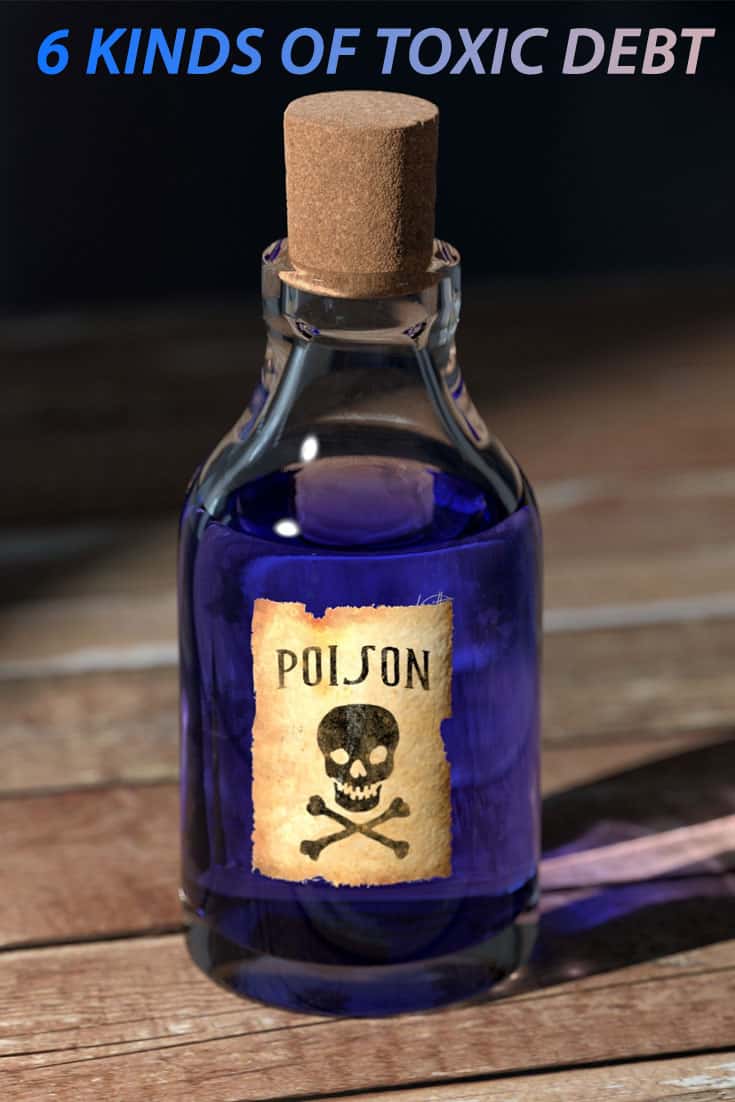 Share118
Pin101
Tweet9
Share
228 Shares
Last Edited: 29th April 2020 The content of biblemoneymatters.com is for general information purposes only and does not constitute professional advice. Visitors to biblemoneymatters.com should not act upon the content or information without first seeking appropriate professional advice. In accordance with the latest FTC guidelines, we declare that we have a financial relationship with every company mentioned on this site.

Tim is a former youth pastor, church planter, and short-term missionary. He taught personal and business finance at Cornerstone University where he also earned his bachelor’s degree and MBA. He and Dawn have been married for 25 years and they have two children. He is the author of The Profit Dare: Winning at Wealth Without Losing Your Soul and Floating Axes & No Taxes: Quirky Tales of Money Miracles and Financial Freakery. Feel free to drop by his website, or connect with him on Facebook.

Previous Post: Bible Verses About Hope: Staying Positive In The Midst Of Hardship
Next Post: Wealthsimple Review: The Safe And Simple Robo-Advisor