Sometimes it can feel that the odds are against you and there is no way to rebound from your current situation. That is certainly true if you’ve accrued a great deal of debt. You may even be facing bankruptcy and feel that your situation is hopeless.

If you don’t believe me, take a look at the film, The Pursuit of Happyness, which documents the real-life struggles of Chris Gardner to get a good job while taking care of his young son and being homeless.

If anyone’s situation seems hopeless, it’s Chris Gardner’s. The year is 1981, his wife has left him, his business selling bone scanners has collapsed, and he only has $30. The IRS has garnished his wages due to back taxes, and he is evicted. Yet, within a year, Gardner dramatically turns around his situation.

Here is what we can learn from him: 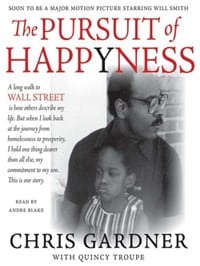 1. Take help where you can get it and don’t be afraid to ask.

Chris and his son spend some scary nights in a subway bathroom. However, he learns about a church shelter where he can stay with his son, and he takes advantage of the shelter.

If you’re deep in debt and facing bankruptcy, you need to take advantage of help where you can get it. Call your creditors and see if you can renegotiate your APR. If you don’t think you’ll be able to pay off your credit card anytime soon, see if the company will be willing to negotiate a settlement deal. Yes, your credit score will be impacted, but if you can pay 25% of what you owe instead of the full amount and get yourself out from under the burden of debt, such a deal may be worthwhile.

2. Never take your eye off the prize of being debt free and work harder than others.

Chris Gardner got a stock broker internship. He and 19 others were competing for 1 permanent job in the company. While others could work late, Chris had to leave early every day to get his place in line at the homeless shelter. That meant that when he was at work, he had to work harder than any of the other interns.

Dave Ramsey often speaks of gazelle intensity, when you place a high focus on paying off your debt and devote all of your energy to getting rid of debt as quickly as possible. The idea is that doing so lets you turn your financial life around more quickly than you ever thought possible. Know that you WILL be debt free, and dedicate yourself to that by cutting expenses, negotiating with creditors and finding extra work.

3. Believe in yourself and your ability to be debt free.

Chris Gardner’s position was precarious, and he had every right to be depressed. However, he rarely gave in to that depression. Instead, he worked as hard as he could to change his financial situation. He knew being homeless was only temporary, and it was. Within a year, he had the permanent position as a stock broker and went on to create a multi-million dollar brokerage firm.

Chris Gardner’s story is one of both personal and financial triumph. There is much we can learn from him about getting out of debt, staying out of debt, and having a better life than we can even imagine.

To read 21 more stories about people who got into and out of large amounts of debt check out the book Debt Heroes. Put together as part of the Debt Movement this book walks you through your personal journey to get out of debt, giving you success stories for example and motivation.

Share24
Pin9
Tweet22
Share6
61 Shares
Last Edited: 26th March 2013 The content of biblemoneymatters.com is for general information purposes only and does not constitute professional advice. Visitors to biblemoneymatters.com should not act upon the content or information without first seeking appropriate professional advice. In accordance with the latest FTC guidelines, we declare that we have a financial relationship with every company mentioned on this site.

Ben Edwards has been addicted to personal finance since he was 12 years old. Now a dad of three little kids, he's passing the same solid money habits onto them. Ben Edwards is a co-author of the Debt Heroes book and writes about money over at Money Smart Life

Previous Post: There Are Always More Ways To Cut Your Expenses
Next Post: Best Online Brokerage Rankings For 2013