A short while ago the IRS released their 2013 IRA contribution limits, income based phaseouts for deductions as well as guidance on what we can expect to see changing this year with Roth and Traditional IRAs.

If you have an IRA it’s a good idea to keep tabs on the changes from year to year so that you can take advantage of any increases in contribution limits, or to make sure you’re not making too much to contribute.  Get a big raise this year? You might not be eligible to contribute to your Roth IRA this year, so make sure to check!

For the 2013 tax year the amount that you can contribute to a traditional or Roth IRA has finally gone up after a couple of years of remaining the same.

Don’t have a Roth IRA yet?  Check out this post talking about the best places to open a Roth IRA. 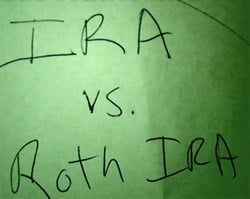 The limit for the Roth and traditional IRA is a shared limit, so keep in mind if you contribute to one, the limit for the other is reduced. The $5,500 is a single combined limit if you want to max out  your contributions.

Here’s a table showing the 2013 Traditional and Roth IRA contribution limits, along with the limits in years past.

AGI Based Income Phaseouts For IRAs In 2013

Both Roth and traditional IRAs have income phaseouts. What that means is once you reach a certain level of income the amount of you can contribute goes down, and gets completely phased out at some point, or the tax deduction for said contribution starts to go away.

For Roth IRAs single taxpayers with an annual Modified Adjusted Gross Income (MAGI) over $112,000 begin to see their allowable deduction drop until at $127,000 it goes away completely. The limits for Married Filing Jointly investors are $178,000-$188,000.

For Traditional IRAs single taxpayers with an annual Modified Adjusted Gross Income (MAGI) over $59,000 begin to see their allowed deduction drop until at $69,000 it goes away completely. The limits for Married Filing Jointly investors are $95,000-$115,000.

Contribute For Previous Year Right Up Until Tax Day

In fact, you can still open a Roth IRA or a traditional IRA and contribute the fully allowed amount up until tax day. Tax day will fall on Monday, April 15th, 2013 this year.  So there is still plenty of time!

Make Sure To Keep Watch On Your Limits

When you’re contributing to a Roth or Traditional IRA you’ll want to keep an eye on the limits and phaseouts.  If your income is reaching phaseout thresholds, you may want to consider reducing your taxable income by contributing to an account like a 401k, or reducing your taxable income by making charitable contributions, etc so that you can continue to be eligible for the account type.

Also keep an eye out so that you can make sure to increase your contributions in years, like this one, where the contribution limits increase.

Are you increasing your contributions this coming year?

Share20
Pin5
Tweet
Share4
29 Shares
Last Edited: 25th January 2013 The content of biblemoneymatters.com is for general information purposes only and does not constitute professional advice. Visitors to biblemoneymatters.com should not act upon the content or information without first seeking appropriate professional advice. In accordance with the latest FTC guidelines, we declare that we have a financial relationship with every company mentioned on this site.

Previous Post: Homeowner Tax Breaks, Deductions And Credits Reinstated In The American Taxpayer Relief Act of 2012
Next Post: File Your Taxes Early To Avoid Being A Victim Of A Popular Tax Scam