One thing that I’ve seen over the past few years is that while the concepts of personal finance aren’t always rocket science, people still quite often have a hard time grasping them – or they are just willfully ignorant of them.

People are very good at finding ways to screw up their finances. Whether it’s maxing out their credit cards, or not being able to make the payments on a car they can’t afford,  they make the same mistakes over and over.  It it any wonder that the average credit card debt per household with credit card debt is almost $16,000? (source)

The sad thing is that so many people aren’t in debt, bankruptcy or foreclosure because of things beyond their control.  They’re making avoidable mistakes. 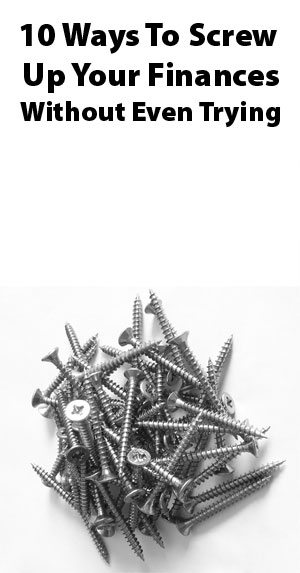 10 Ways To Screw Up Your Finances

Today I thought I’d put together a list of some of the most common personal finance mistakes that people make that can easily mess up their finances if they don’t stop making them.

In this day and age there is really no excuse for not being able to figure out your finances. There are a thousand and one educational resources online that can help you to get a hold of your financial situation, and much of it is common sense.

We need to be educating our kids about money, and taking responsibility for our own financial futures, otherwise we’ll end up screwing it all up, and end up just another statistic.

What are some ways that you’ve seen people screw up their finances?  Have you made some of these mistakes yourself?  Tell us your thoughts in the comments!

Share88
Pin4
Tweet
Share17
109 Shares
Last Edited: 21st June 2016 The content of biblemoneymatters.com is for general information purposes only and does not constitute professional advice. Visitors to biblemoneymatters.com should not act upon the content or information without first seeking appropriate professional advice. In accordance with the latest FTC guidelines, we declare that we have a financial relationship with every company mentioned on this site.

Previous Post: Why I Try To Avoid Stocking Up On Deals
Next Post: An Example Of How Moving Forward Requires Letting Go