First, I need to say thanks to Pete for bringing me aboard Bible Money Matters! It’s a thrill to be writing for one of the very first PF Blogs that inspired me to start my own!

The ironic part of this is that I’m writing about a post to create extra income and that is exactly what I’m doing while I’m writing! As Craig mentioned previously, I too am stumbling into freelance writing – it’s a lot of fun, and a cool way to make a little side money.

So let’s take a look at a few other ways to create a little side hustle! 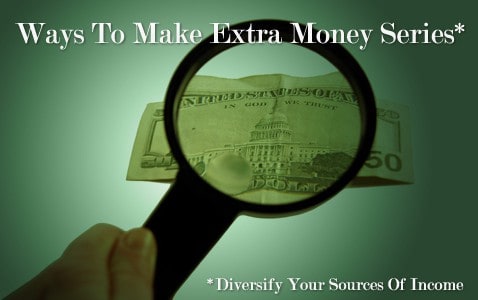 Make Money Doing Something You Love

This is something my wife and I both have experience in! My wife Jen has a passion for photography, and she’s got a good eye for it! She took her hobby and gave making some money from it a shot. She started putting herself out there by taking pictures of friends and their kids. The next thing we knew, she started getting some referrals and business started to grow!

She invested money back into the business by purchasing good equipment and we ended up building a studio for her in our basement! She loves it! She figured out a way to make money at it – and that’s the best of both worlds.

I am also trying my hand at the very same thing. I’ve always enjoyed writing. I was the geek in high school and college that secretly enjoyed writing projects and research papers! The problem was, I never knew there was a way to make a little cash from writing until I discovered blogging! Now I’m beginning to make a little extra income doing something I really love to do!

Sell Stuff On Ebay – For Others

Craig wrote about making money from Ebay in his recent post. I want to expand on that idea and talk about making a little extra cash by selling stuff on ebay for others.

I started selling stuff on Ebay a few years ago and was mildly successful at it. I had a pretty good gig going for myself until I ran out of my own junk to sell and didn’t really want to shop garage sales and thrift shops to find some deals.

What’s funny though is that as I began to tell people about my Ebay success, I had friends and family asking me to sell some of their own stuff for them!

I sold a few items for them, but didn’t charge anything for it. Looking back, I could’ve charged a certain percentage of the sale and been compensated for my time.

I had a good system down and a great rating to help. All I needed was the foresight to realize that there was some cash to be had!

Ok, so this isn’t the most appealing idea on this list, but hey – it works! My wife and I had plenty of experience doing this as well.

When we first got married and we weren’t making very much money we used cleaning as a way to help pay off debt and get ahead.

We used to clean office buildings and doctor’s offices. If you know any business owners or commercial real estate owners, approach them about who they use to clean their places. They may be looking for someone new or they might be willing to give you a shot.

It’s nothing fun, but it’s a great way to get a little cash coming in!

My wife has done a good job of this a few different times while we’ve been married. At one point she was selling scrapbook supplies, make-up and jewelry and making some decent money!

The problem with selling these products is that you really need to either recruit some people underneath you or get some really great referrals to keep the pipeline moving because it’s hard to keep trying to sell to the same friends and family.

But, if you have a good product and you believe in it, you’ve got a serious chance of making some great side income by selling these items.

Use Your Expertise To Make Some Side Money

Have you become a guru in a particular subject that people are interested in? Are folks willing to listen to you on a certain topic because you’re successful at it?

Use that as an opportunity to sell your expertise. You can do this by holding yourself out there as a consultant, trainer or even a part-time teacher at a local college.

As I type this, my wife is down in Florida paying a photographer some decent money to teach her everything she knows about digital photography! I told Jen that as she progresses in her field this would be a great way to make some side money – by offering herself as an expert to train and consult with other photographers who are just starting out!

So what do you think? Have you made any side income doing some of these things?  Have more of your own ideas? Tell us about it in the comments below!

Share11
Pin1
Tweet
Share1
13 Shares
Last Edited: 10th February 2014 The content of biblemoneymatters.com is for general information purposes only and does not constitute professional advice. Visitors to biblemoneymatters.com should not act upon the content or information without first seeking appropriate professional advice. In accordance with the latest FTC guidelines, we declare that we have a financial relationship with every company mentioned on this site.

Jason Topp writes at Redeeming Riches where he helps others Restore Their Money and Renew Their Minds. If you want to learn how to save money be sure to check his site out.